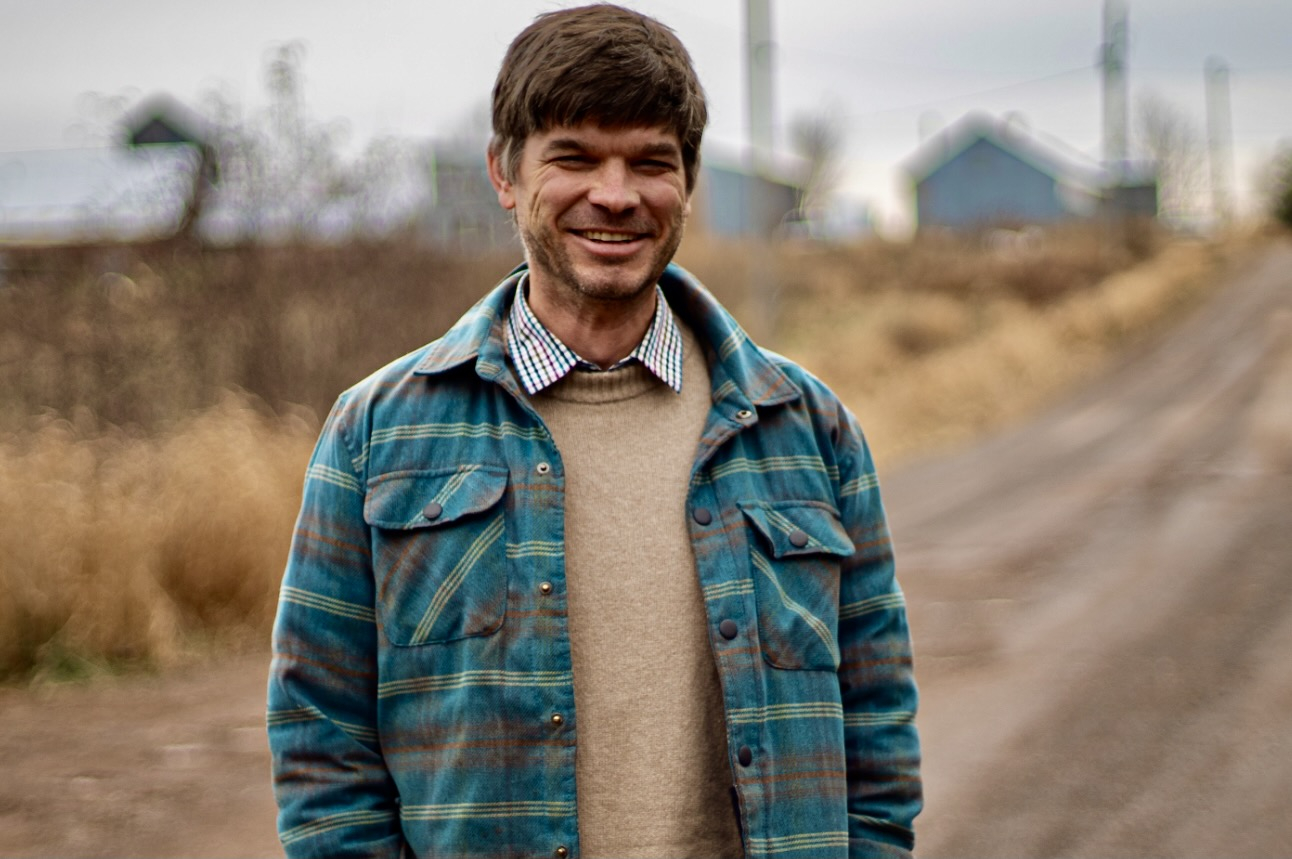 Yuill Herbert is an emission reduction adviser to some of Canada’s largest cities, but he does most of his work from Tatamagouche — a tiny village on the eastern edge of Nova Scotia.

Despite his love of country life, Herbert sees potential and beauty in cities and puts his energy into ensuring they are well-designed and adapted for a changing climate. Through Sustainability Solutions Group, the workers’ co-operative he co-founded, he has led over 40 community energy and greenhouse gas reduction plans across Canada. He has collaborated with metropolises like Toronto and smaller communities like Halton Hills, Ont. — the first municipality in Canada to pledge to be net-zero by 2030.

SSG was formed about 18 years ago when Herbert, fresh out of university, couldn’t find a job. He and a group of like-minded students at other Canadian schools had pioneered a model for conducting sustainability assessments for universities. They dreamed of forming a consultancy to continue their work and seized on the idea of forming a workers' co-operative. It was a somewhat unconventional business model that Herbert found “super exciting.”

“Such a fascinating model with such a long history, which really goes back to the Maritimes,” Herbert said.

The co-operative landed exactly zero projects the first year and its members quickly realized they had to broaden their scope to provide sustainability consultancy services for municipalities. The four others, who lived in Montreal and on the East Coast, gave Herbert a chunk of their salary to work on developing the business for a year. They got a grant from the federal government and projects slowly started flowing in. The first major contract came from Salt Spring Island.

The island, nestled between the B.C. mainland and Vancouver Island, put out an ask for proposals analyzing how to keep GHG emissions at a minimum as the community grew. SSG developed a scenario where new buildings would be positioned near the centre of the island’s largest village, Ganges, which would see the community save 26 per cent of its future GHG emissions.

Sustainable land-use planning, in this case, meant concentrating buildings near the town centre so people would be more likely to commute without cars. The less people drive, the happier they are, Herbert said, and concentrating density cuts back on costs for municipalities. Sprawling suburban communities are worse for the environment and difficult to change once built.

“It was interesting because I don't think anyone had been really thinking about the relationship between land-use policy and climate. How people move around communities,” he said.

The Salt Spring Island plan informed a lot of the climate-centred city design work Herbert does to this day. Fast-forward to 2021; Herbert has brought the LEED for Homes rating system, which measures health and environmental standards in buildings, to Canada. SSG now has more than 30 members and Herbert has a slew of projects on his desk, including the City of Toronto’s new goal of reaching net-zero by 2040.

That’s a big deal for a city of its size. According to the United Nations, cities generate more than 60 per cent of greenhouse gases worldwide and consume 78 per cent of the planet’s energy, all the while taking up only two per cent of the land.

As the founder of Sustainability Solutions Group, Yuill Herbert has led over 40 community energy and greenhouse gas reduction plans across Canada. #ClimateCrisis #ClimateChampion

Herbert became an environmentalist at age 13 when he lived in the Shuswap area of B.C. Hundreds of people protesting old-growth logging in Clayoquot Sound were being arrested. The War in the Woods, as it came to be called, made Herbert think critically about forestry in the southern Interior, and shifted how he thought about the environment.

He ached to join the protests and pleaded with his parents to allow him to go, but they refused. However, after graduating from Mount Allison University in New Brunswick with a philosophy degree, he made up for it by cycling across the country in a “Climate Change Caravan” of fellow university students and concerned citizens to raise awareness about climate change.

It was the year 2000, and the journey took five months. From shutting down gas stations to community events explaining how carbon is harming the planet, Herbert and a couple of dozen others journeyed from coast to coast, accompanied by a vegetable oil-powered bus carrying their gear.

An archived web page of the cyclists described 23-year-old Herbert’s “addiction to all things environmental” as “unwavering, passionate, and from the heart.”

“It was pretty life-changing,” he said, while thinking back on the trip, sipping a cup of tea at his kitchen table.

His house is nestled on a 100-acre piece of land, which is part of the Tatamagouche Community Land Trust. His partner has an organic vegetable farm on the property, and will soon have a greenhouse outfitted with a heat pump across the small dirt road from their house. When asked if he has any retrofits or special things that make his house sustainable, he says there’s a simple and environmentally friendly answer — it was set to be demolished on another property down the road, so they moved it and saved it from the garbage dump, where it would emit carbon for years to come.

His bike trip took place during a different time in his life –— one without children and COVID-19. Although he’s still having the same ground-level discussions with people, he admits it’s surreal to see how things have changed.

“It was before climate change was really part of the mainstream discourse ... we had amazing, insightful conversations because people were already experiencing the impacts of climate change, even in 2001. And this was a less-politicized environment — people were more open to discussing it. ”

Working with Herbert has been a joy for Rebecca Foon, an urban planner and co-op board member who co-founded Pathways to Paris — a non-profit advocating for moving articles from the Paris Agreement forward. The two collaborated on the CityInSight tool, a modelling tool that uses data, such as GHG emissions, to create holistic community climate plans.

Foon met Herbert and joined SSG in 2008, and frequently calls him for advice on anything climate-related. He’s always researching and learning about new ideas, she said.

“He believes so much in the co-operative sector and justice and human rights and meaning and purpose,” she said.

“And he really is like a visionary for what the world could be.”

Herbert envisions more democracy, equity and accessibility working its way into how we adapt to a changing climate. He points to Carbon Co-op, a U.K.-based group that employs people to retrofit homes while they live in them.

In the transition away from fossil fuels, he worries it will be all business, skimming over inevitable social challenges, unless creativity and justice are present every step of the way. Already over 20 years into that journey, Herbert said he is still hopeful and enthusiastic about communities and sustainability.

“'I’ve always been kind of excited,” he said.

"That’s a big deal for a city

"That’s a big deal for a city of its size. According to the United Nations, cities generate more than 60 per cent of greenhouse gases worldwide and consume 78 per cent of the planet’s energy, all the while taking up only two per cent of the land."
Convenient comparisons. They also have, in Canada, over 80% of the population.

Seems like Mr. Yuill, who prefers rural life, might also be part of a majority of people: except most people are employed in jobs that require them to live where the rest of the people do. Given the pollution, heat islands, noise, crowding, extraordinarily high cost of living, and the sort of crime and violence that seldom happen in rural settings, many fewer people looking at the facts would choose city living.

I strongly suspect most people live where they have to, not where they'd choose to if they had good coices. I doubt that my neighbourhood is different from others, and several households within a block of me have left the city, because they can now work online.

At this point, I don't think anyone has just cause to be optimistic about climate change, foolishly or otherwise. We all need to be doggedly vigilant and apply unprecedented pressure on decision-makers.

Nice links for CityInSight and the UK Reno Coop.
Yuil lives in the countryside - nice.
Does he walk to the shops? Do his kids walk to school? To the library? To the movies? How much extra does it cost the rest of us living in dense, walkable neighbourhoods for him to live self righteously in the woods?