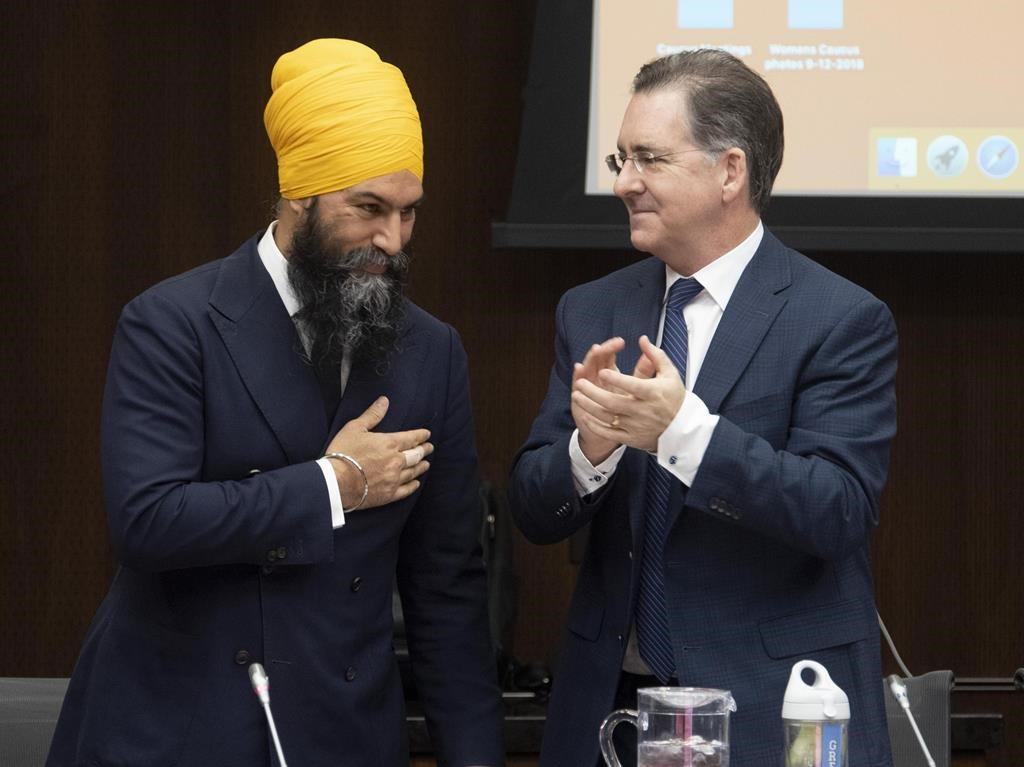 Brian Masse stands with other members of the NDP caucus to applaud Leader Jagmeet Singh at the start of a two-day meeting in Ottawa on Jan. 22, 2020. File photo by Adrian Wyld / The Canadian Press
Previous story

The federal NDP critic for economic development has written to the heads of Canada's biggest supermarkets asking them to restore "pandemic pay," which was brought in after COVID-19 first struck but was then cancelled.

Brian Masse, MP for Windsor West, says grocery store workers, including those at the checkout, are doing risky work during the Omicron surge and again deserve "hazard pay" for helping to keep stores open and shelves stocked.

More often women and ethnic minorities, and with low incomes, these workers should be made to feel their work during the Omicron surge is valued, Masse said.

"It is eye-popping that two years after the pandemic started we should still be discussing rights and rewards for essential workers," he told The Canadian Press. "There's no doubt they are essential. It's not just groceries, but pharmacies and other stores we rely on."

The MP says he wants to hold Sobeys CEO Michael Medline to his promise before a Commons committee in July 2020 that he would reintroduce a wage premium if provinces reinstated public health restrictions.

Masse sits on the House of Commons standing committee on industry and technology, which in summer 2020 held hearings into supermarkets’ decisions to cancel pay boosts for their employees during the pandemic.

At the committee, Medline, president and CEO of Empire, which owns Sobeys, was the only supermarket chief to commit to reinstate pay boosts if new COVID-19 lockdowns were introduced.

"Should this terrible virus rear its ugly head to the degree that provincial authorities in certain regions of a province go back to lockdown like we experienced in March and April, we will put hero pay back into our company stores in those regions or cities. That would be the right thing to do," he said.

Brian Masse, MP for Windsor West, says grocery store workers, including those at the checkout, are doing risky work during the Omicron surge and again deserve "hazard pay" for helping to keep stores open and shelves stocked.  #COVID19

Sobeys and a few other grocery store chains provided workers with a temporary wage bump during the third wave of COVID-19 in spring 2021.

On Wednesday Masse wrote to Medline along with Eric La Flèche, president and CEO of Metro, which also owns Super C and Food Basics, and Galen G. Weston, chairman and president of Loblaw, asking if they planned to bring in pandemic pay boosts now that some provinces have reintroduced restrictions to tackle the Omicron variant.

Ontario has returned schools to online learning while Quebec has begun Sunday closures of stores, with the exception of pharmacies, convenience stores and gas stations. British Columbia and Manitoba have also tightened controls.

Sobeys said it had distributed over $110 million in "hero pay" and bonuses to its front-line team members. In his reply to Masse, Medline said it had offered a lockdown bonus program in Nova Scotia and Ontario this past summer, as they were each in lockdowns that closed all non-essential retail.

"As our president and CEO promised in July 2020 at the (committee) hearing, should we find ourselves in government-mandated lockdowns that close all non-essential retail, we will reinstate our lockdown bonus — as we have done every single time since that promise was made."

This report by The Canadian Press was first published Jan. 5, 2022.