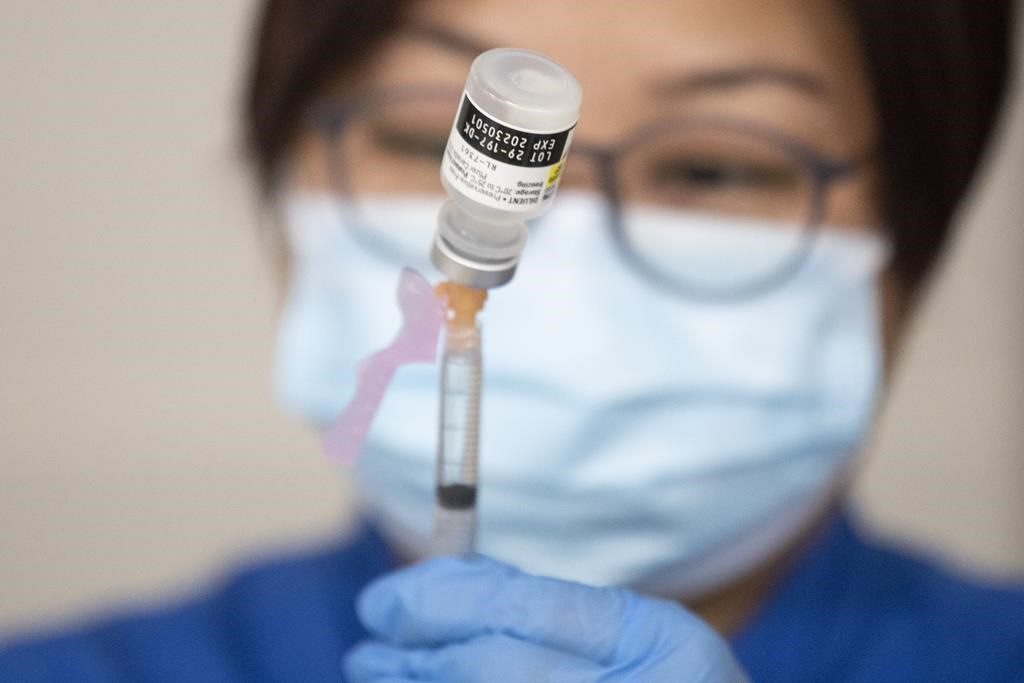 A nurse prepares a COVID-19 vaccine shot before the opening of a mass vaccination clinic in Mississauga, Ont., on Friday, Dec. 24, 2021. File photo by The Canadian Press/Chris Young
Previous story

Advocates working with Black and Indigenous communities say a proposal to make unvaccinated adults pay a financial penalty risks further entrenching inequities in Canada's pandemic response, and adding another burden to those who are marginalized.

Quebec Premier François Legault announced Tuesday the province is working on a health-care "contribution" that would be charged to all adults who refuse to get vaccinated against COVID-19.

The plan landed as provinces try to navigate their response to record-setting caseloads, driven by the more transmissible Omicron variant, that doctors warn threaten to overwhelm hospitals.

Legault's government is still working out the legalities, but the premier said the financial penalty will be “significant.”

That could be a problem for people who have been hesitant to receive the vaccine because of historic and present-day injustices, or face systemic barriers to accessing the vaccine, said Black Health Alliance executive director Paul Bailey.

“We know that can further undermine public trust in governments or just the confidence in the vaccine, period,” Bailey said in an interview.

A report by the Black Opportunity Fund, African-Canadian Civic Engagement Council and Innovative Research Group found a 20-point gap between white and Black Canadians who had received at least one vaccine dose between May 18 to June 4, 2021, according to a survey of 2,838 respondents.

Because it was an online survey, a margin of error cannot be calculated.

“In parts of the country, let's say in places like Toronto and Montreal, there are particular populations — Black, racialized, low- and very low-income — who have high COVID burden and lower COVID vaccination,” Bailey said.

“We know that they're already living with the spectre of poverty and many other inequities, whether it be food insecurity, housing insecurity. And so for this specific population, applying a tax to them only further entrenches those inequalities.”

Provinces do not keep socioeconomic or race-based data about who has or hasn't received a full slate of shots. Several health equity experts say there is evidence some have fallen through the cracks.

Caroline Lidstone-Jones, CEO of Indigenous Primary Health Care Council in Ontario, said regardless of the province, First Nations, Inuit and Métis populations have a history and real-life examples of being mistreated within health systems, which must be addressed.

Most recently, she pointed to the case of Joyce Echaquan, a 37-year-old Atikamekw mother of seven, who died in a hospital near Montreal from a pulmonary edema linked to a rare heart condition.

Before she died, Echaquan filmed herself on Facebook Live as a nurse and orderly said insulting things about her-- actions that were investigated as part of a coroner's inquest that found systematic racism played a role in her death.

Lidstone-Jones said when it comes to serving the needs of marginalized populations, it's not as simple advertising vaccine availability because people don't always have access to the internet, where a large part of health education and resources are found.

"How do you tell somebody who's worried about meeting their basic needs, that now I'm going to charge you because you can't even meet your basic needs, as you know, clothing, food, shelter?" she said Tuesday.

"That's a really hard sell when somebody may be worrying about being on the streets and being able to feed themselves or their families versus getting access to a vaccine."

Dr. Nazeem Muhajarine, a professor of community health and epidemiology at the University of Saskatchewan, said the goal should be to help those who are on the margins of society see that they belong in medical system and that getting vaccinated protects not only themselves, but their families.

He said the policy of levying a financial penalty against unvaccinated adults runs the risk backfiring among those who are low-income as well as those who distrust the system.

Speaking more broadly, Muhajarine said it's unclear how many vaccine holdouts will be compelled to get jabbed because of a new fee and said the policy carries the potential of making individuals dig their heels in even further and accuse the government of behaving like a "nanny state."

Canadian Medical Association president Dr. Katharine Smart said Quebec's proposal speaks to how strained the health system is in parts of the country as leaders look for ways to protect hospital capacity over the long term.

"None of these are things that anybody wants to be doing."

This report by The Canadian Press was first published Jan. 11, 2022.

Tax on the unvaxxed: Canadian province becomes the first to impose heavy fines on the unvaccinated

Vaccines have been widely

Vaccines have been widely available to the general adult population for at least 6 months now - accessible without appointments for a significant chunk of that time. A huge number of people across all sorts of demographic cross-sections have been vaccinated during that period. I have a hard time believing that at this time there are many people who still haven't had their first dose due to barriers to access or injustice-based hesitancy; it's almost certainly due to misinformation they've been exposed to.

That doesn't make the vax tax right from an equity perspective, both the impact it has on low income individuals and the healthcare precedent it sets more generally.