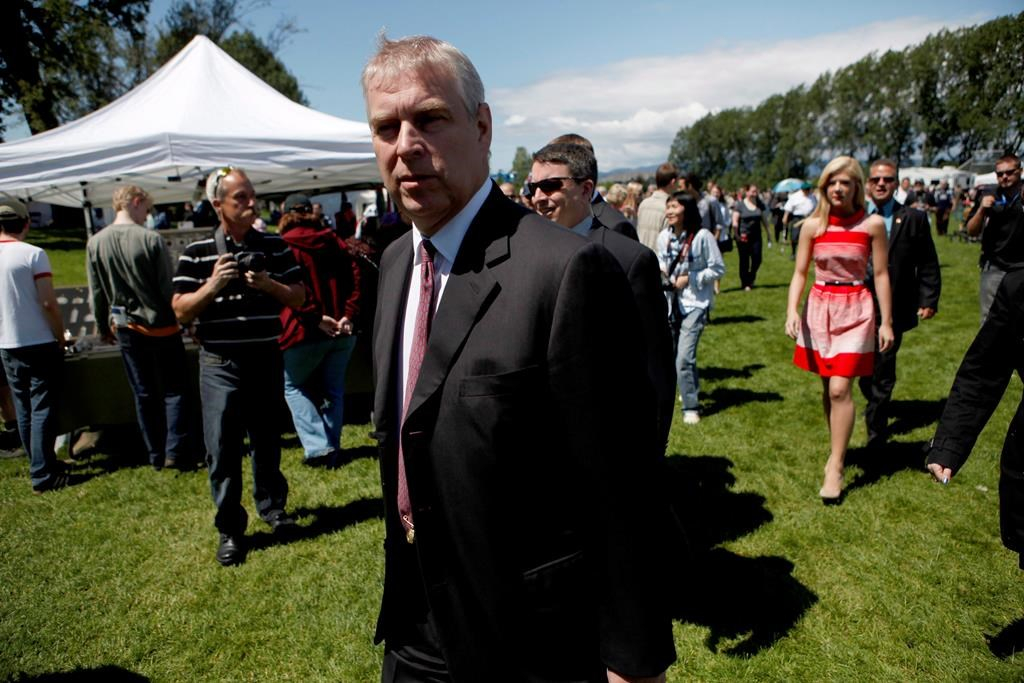 Prince Andrew, the Duke of York and honorary Chief of the 150th Victoria Highland Games in Victoria, B.C., on Sunday, May 19, 2013. File photo by The Canadian Press/Chad Hipolito
Previous story

Three Canadian regiments were left without a patron Thursday after the Queen stripped Prince Andrew of all his military titles and royal patronages.

The disgraced Duke of York was the honorary colonel-in-chief of three Canadian regiments: The Royal Highland Fusiliers of Canada, The Princess Louise Fusiliers and the Queen's York Rangers.

Rideau Hall and a spokesman for the Canadian Armed Forces confirmed that those titles have now been "relinquished" by the prince, the Queen's second oldest son.

Royal expert Richard Berthelsen, a former adviser to past lieutenant-governors and governors general in Canada, said the Queen's decision puts an end to two years of uncertainty for the three Canadian regiments.

Private organizations in Canada — including Lakefield College School, the Royal Victoria Yacht Club, the Maple Bay Yacht Club and the SickKids Foundation — that had once proudly touted the prince's patronage severed their ties with him in 2019 when he stepped aside from all public duties amid a sex trafficking scandal.

But until now, Berthelsen said the military regiments' hands were tied. They could not unilaterally dissociate themselves from Prince Andrew but had to wait for his honorary titles to be withdrawn by the Queen or the prince himself.

While the Queen could appoint another royal patron, Berthelsen predicted that is unlikely given the recent death of her husband, Prince Philip, and grandson Prince Harry's withdrawal from royal duties.

"Most Canadian regiments want to have a colonel-in-chief because it's an important symbol," he said.

"The problem is … there's a diminishing number of members of the Royal Family who can play that role so he's not likely to be replaced any time soon, I don't think."

In addition to his honorary role with the three regiments, the royal website lists a number of Canadian organizations for whom Prince Andrew is a patron.

However, the list appears to be outdated. It includes organizations — such as Lakefield College School and the two British Columbia yacht clubs — that confirmed Thursday they cut ties with the prince two years ago, amid bombshell allegations by Virginia Roberts Giuffre, who has launched a civil suit against Prince Andrew.

The American woman alleges that she was trafficked by sex offender Jeffrey Epstein, with whom the prince was friends, and was coerced into having sex with the prince three times while she was underage.

The Queen's decision to strip him of his military titles and patronages came one day after a U.S. judge rejected a bid by the prince's legal team to have Giuffre's lawsuit dismissed.