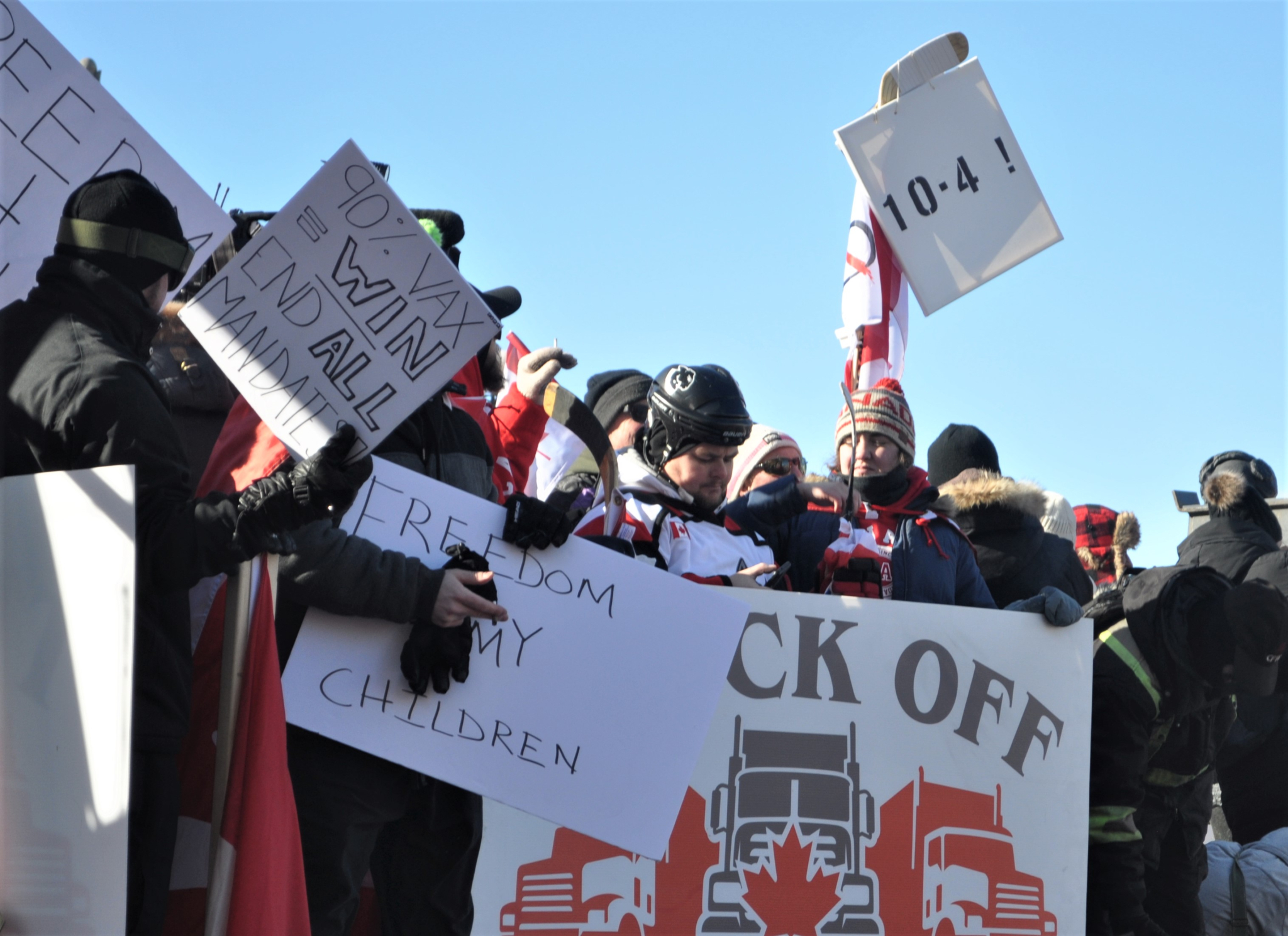 I headed into Ottawa’s downtown core Saturday evening, emerging onto Bank Street just south of Parliament Hill. The street was a parking lot of idling trucks, three and four deep, the air toxic with diesel fumes and punctuated with long, jarring pulls on horns. People were cheering, hooting, and screaming, walking up and down, then up and down again on streets they had taken over, although they seemed unsure of what to do with the streets now that they had them.

Some were victory dancing on truck roofs the height of a bungalow. Others were gleefully and openly drinking alcohol as they promenaded, and I saw one trucker passed out behind the steering wheel of his idling truck. Maybe he was catching a nap after a long, cold day of protesting, but his head had fallen forward at what looked to be a painful angle, his mouth was hanging open and the windows of his cab were rolled all the way down on an evening when I could barely keep my hands out of a mitt long enough to take a picture.

It was almost like Canada Day with people wearing the symbolic maple leaf on goofy hats, painted on faces, and draped on shoulders. There were people with toddlers in snowsuits or pushing strollers and fireworks shot into the dark, starry sky. What was lacking was the easy, happy-go-lucky, strolling and mingling. This crowd was celebratory, but also tinged with something that did not invite cheery eye contact.

Maybe they were celebrating the right to paint swastikas on a Canadian flag. The hand-lettered signs I saw were no more illuminating: Freedom is not Coercion; This is not China; My Body My Choice; No More Mandates. But their demands keep morphing with many now falling under provincial and territorial jurisdictions. You can only imagine how well the Premiers slept, safe in the knowledge that the protest organizers appear to have failed high school social studies.

At the #Ottawa #truckers protest, freedom seemed to mean the right to dump your crap anywhere. @beckyrynor writes for @natobserver. #cdnpoli #vaccines

Had I asked why they were so jubilant, I’m guessing I would have gotten the same messages conveyed by the signs now littering streets and sidewalks. It’s hard to hold a beer, take a selfie and wave a sign all at once. Obviously, something – like your political convictions – has to be ditched. Garbage was piling up everywhere – mounds of Tim Horton’s coffee cups, takeaway food containers, bottles and cans. Apparently freedom also means the right to drop your crap anywhere you like for someone else to pick up.

I walked past the statue of Terry Fox, still draped in a Canadian flag cape, although someone had removed a jaunty cap and protest sign as outrage mounted over this defilement and reports of protestors dancing and later urinating on the Tomb of the Unknown Soldier. Video of the woman who did a little dance then screamed “freedom” on the steps of the cenotaph had more than 3,000 tweets by Sunday night. Was this the social media rock star status she came to Ottawa looking for?

I squeezed through a crowd gathered around a tent blasting music and an impromptu dance party across from the iconic Chateau Laurier. This would not have been the weekend to visit Ottawa for skating and beavertails. Past the Chateau to Rideau St. and more idling trucks blocking streets, long deafening pulls on horns, dancing, hoots and screams. It was still disturbing but now seemed tinged with desperation. Whoot. Whoot?

As the protesters tried to juice up the momentum behind their “victories,” they appeared blissfully unaware of the violations they visited upon the city – strewing garbage; urinating on the streets, polluting the air with vast amounts of fossil fuels; harassing retailers who wouldn’t serve the unmasked.

For me, the slow burn started later Saturday night in a tweet from the Shepherds of Good Hope. It reported some protesters had shown up at Ottawa’s Byward Market demanding free meals from a soup kitchen that works on a shoestring to feed the homeless, the unemployed and poor. I volunteer at the Ottawa Mission two mornings a week. To think hard-bought, carefully sought and lovingly prepared food went into the bellies of the well-fed and already entitled may be the greatest violation of all.

Instead of queue bashing at a soup kitchen, maybe the self-designated “freedom fighters” could stand up for the rights and freedoms of people who respectfully line up for what might be their only meal of the day. Overall, these demonstrators have a big tab to cover for their getaway weekend in Ottawa, beginning with those free meals from the Shepherds of Good Hope. Throw in a healthy gratuity, considering the reportedly accrued war chest of several million dollars. Add a few dollars for what it will cost Canadian taxpayers to clean up after your rigs have been turned around and headed for home.

Port-a-potties at strategic locations don’t come cheap – not that all of you bothered to use them – and the cost of the heavy security presence throughout downtown Ottawa will also be absorbed by taxpayers, so dig deep into that slush fund. Then go back to your warm houses and comfortable lives – please, please, please turn off your trucks – then take some time to figure out what it was you were “fighting” for.

completely agree with this

completely agree with this comment. taking food from the homeless? that sums up the quality of their understanding of public good I think.
“You’re not the boss of me!!”. with appropriate 4 year old pouting child face is my image of this whole thing,—- but add a chucky-type slasher blade behind the kid’s back which it plans to use if you laugh—- I find them terrifying and the non response molly coddling of “their right to peaceful prtoest” baffling. ( see G20 response for contrasting response to peaceful protest)

Please city of Ottawa, gov of can, sue organizers for cost of clean up and policing required for their protest. I hear they have $8M in cash to use)
was a permit required to block streets? how much business lost due to fear and intimidation?
sue the organizers for that too! The nascent form of these protests for weeks in Barrie cost downtown business because these goons intimidated patrons for wearing masks!, and who got arrested? citizens playing loud music in their cars to block out the antivaxers’ megaphone projected nonsense in the public square they commandeered against bylaws!

why were these massive trucks not stopped and diverted to an arena parking lot…. organizers required to fill out forms, rent busses to carry protesters to down town? why the kid glove treatment by authorities?
or is it fear of the right wing privileged white folk??? Imagine black lives matters protesters being treated this hands off if they were pissing on the war memorial, crapping on the corner and passing out drunk while blaring horns 24/7? selective tolerance much?
now these bozos say they plan to use their $8 M to camp in ottawa indefinitely, or until we dissolve government and let them rule?
where is the political will to govern here?

Permit is highly recommended but not mandatory, as I understand, because freedom of speech and stuff, but I can be wrong. It still would have allowed for proper planning, logistics and the installation of basic necessities around the protest area.
However given the bunch of delusional tough-guys wannabes, basement revolutionaries that were behind the organization of that Covid Kegger, asking for permission is for the weak.
And you are absolutely right. The city, the businesses and the residents that have been impacted by this stupid protest should sue the organizers.
The fact that the authorities have been so lenient with them thus far, with all the illegal actions that have been reported, is just unbelievable.

The BLM rally in Vancouver

The BLM rally in Vancouver had a whole row of portapotties, they could have handled six times larger a crowd.

I took a bunch of photos, it was basically a fun park music concert and a few speeches. Nothing but good sounds, bored police. I took several pictures, mostly about how bad the covid-spreading odds were.
http://brander.ca/c19#ourprotest

Great article. I wonder though after this is over should we ask them, as Mayor Watson says, to "just go home"? Perhaps the organizers should be arrested and charged for what they have done. It was all public and it was all video taped. Just because something is under the guise of a protest - Ottawa citizens and business have been severely violated. These known thugs, arriving with no plans, no real demands, weaponized monster trucks and constant horn blaring and as another commentator said a Covid Kegger need to pay for their actions. Not just go home.

Quite apart from the

Quite apart from the delusional (possibly certifiable?) protesters - there is the little matter of the grifting "organizers". Don't expect them to respond to any lawsuits or appeals for reparations. They are init only for the money which will promptly disappear into offshore accounts. Whoever is behind this farce is no dummy - just a practiced scammer playing games with the frustrations of the impatient and deluded. Ottawa police might very well like to arrest them , and may yet do so when they get the word to remove the trucks rather than blow up the log jam. It is a hell of a lot easier to roundup/intimidate pedestrian protestors than it is to wrangle, multi-ton, toxin belching behemoths. Perhaps hiring the wrecking truck business crews to haul away the junk and billing the owner/operators for the "service" - issuing summonses for illegal obstruction of traffic, with penalties to include the suspension of trucking licenses might do the trick. The other solution is to pass out free beer, laced with sleeping medication and roll the "victors" into cattle cars and deposit them in empty warehouses. A mobile drum head court can set up in the warehouses and process the idiots - issuing fines that may well cover the damages. Fines to be paid before release permitted. People grouped by location of origin and escorted convoys sending them on their way.

looking forward to seeing queens park protection plan for planned TO protest this weekend by the same crowd of “you’re not the boss of me bullies.
I propose a spike belt on all incoming roads at several kilometer perimeter OR a police car barricade on all roads into Toronto which lets only cars through OR trucks diverted to arena parking lot, arrests for no permit demo. So many possible tactics. IF they want to stop them that is.
How incompetent/unprepared/ uninterested in stopping this outrageous civil disobedience disrupting !! It is clearly a hostage taking of city/ tank occupation that is happening now in Ottawa and Coutts Alberta (where there are NO arrests though head-on ramming and assault! with weapons—- some “protestors”. sure get kid glove treatment.)
if cops are scared of them, please helicopter in the lethal force full metal jacket squad to do the clearing. I hear they have a force handy in B C with lots of recent practise clearing out unarmed grandmothers!

It is the incompetency of the

It is the incompetency of the police, provincial and federal, that is the main problem. They knew what was coming long before they arrived and did nothing to prepare. But, when you think about it, it's the negative side of unions siding with unions that is the real problem. Police unions backing trucking unions - fear of reprisal by and for any reason could be a motivating factor for all.