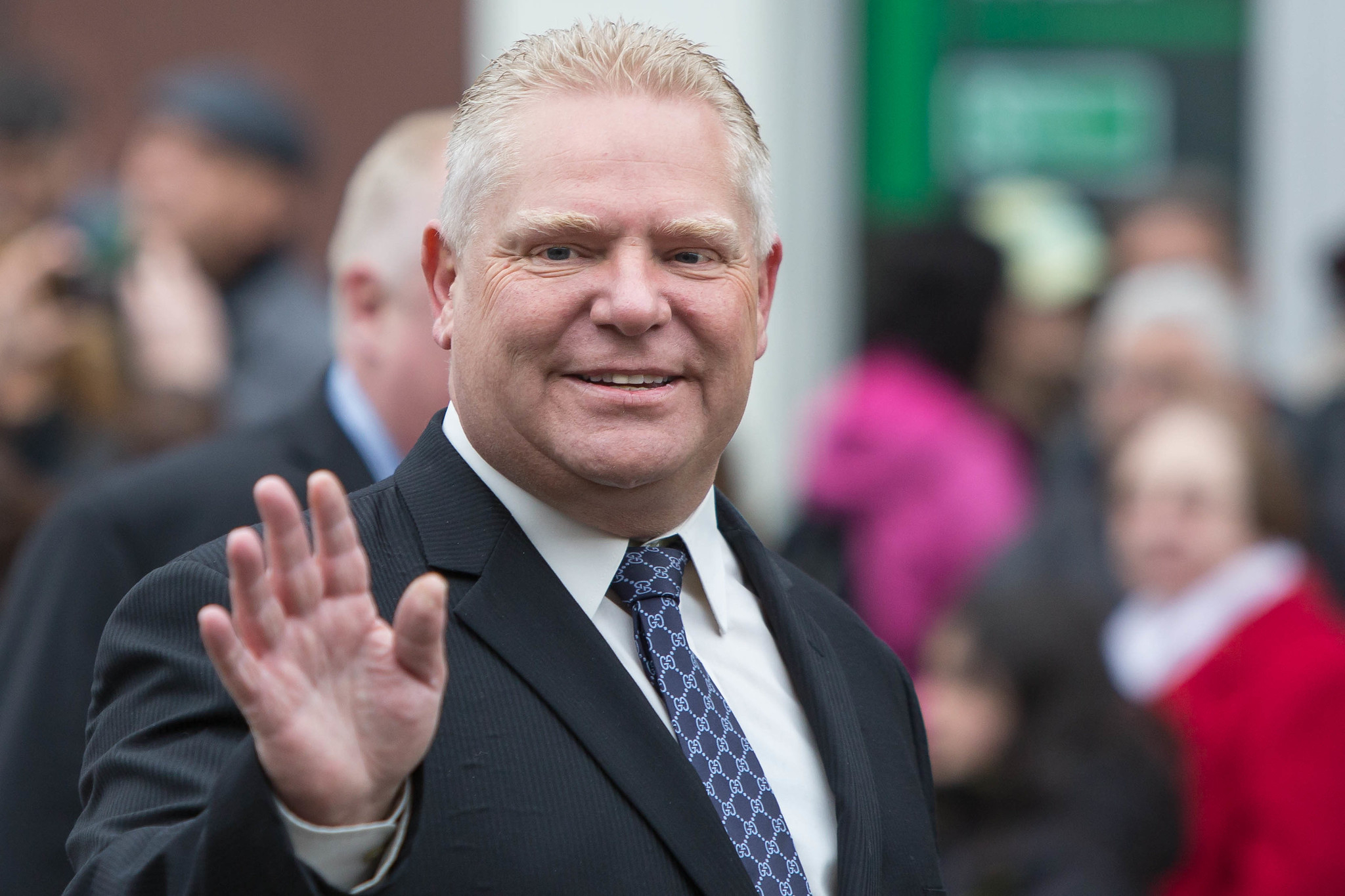 Doug Ford’s appeal to voters in suburban Toronto and other parts of Ontario could be just the thing to break the Liberal government’s stronghold there, writes columnist Max Fawcett. Photo by Bruce Reeve / Flickr (CC BY-SA 2.0)
Previous story

When they departed for Ottawa last week, the convoy of anti-Trudeau truckers thought they were headed to the nation’s capital to bring the government down. Instead, they managed to topple Conservative Party of Canada Leader Erin O’Toole — and helped launch the third leadership race since Stephen Harper stepped down in 2015.

And with the gulf only widening between the party’s remaining moderates and the ideological extremists that are clearly in control, it could be on the verge of a civil war that splits the party Harper knit together nearly 20 years ago.

On the surface, that’s good news for Justin Trudeau and the rest of the CPC’s opponents. As Andrew Coyne wrote in the Globe and Mail, “Their decision to ally themselves with the pseudo-Trumpian grift known as the ‘trucker’ convoy — organized and led by documented racists and QAnon-style nutters, unrepresentative of the vast majority of truckers and indeed having little to do with truckers or even vaccine mandates — is not just a moral disgrace, but will do lasting damage to the party.”

John Ibbitson, Coyne’s colleague at the Globe, suggested that it’s a “glorious time to be a Liberal.”

Maybe. But it’s an increasingly dangerous time to be a Canadian, given the official Opposition and the only other party to ever form government is surrendering to the kind of conspiracy-minded, grievance-oriented politics Donald Trump brought to the United States. And at some point, the Liberals are going to lose an election whether it’s because of a mistake the party makes or an event that’s beyond its control. If they lose it to this iteration of the Conservative Party, they’ll be handing the keys to the machinery of government over to people who don’t seem to know how to drive.

As far as his own party is concerned, O’Toole’s big mistake was not that he backed a trucker convoy marbled with far-right elements, but that he didn’t embrace its values quickly enough. According to recent reporting, the original impetus for O’Toole’s ouster was his support for a bill banning conversion therapy and his decision to put a carbon tax in the recent election platform.

“This was all started by the group that are internally referred to as the Conversion Crew,” a source told CBC senior parliamentary reporter Travis Dhanraj. “They’re driving this.”

It’s theoretically possible a moderate like Patrick Brown, James Moore or Rona Ambrose could rally what remains of the progressive conservative base around them and pull the car out of the ditch. But it seems far more likely that someone from the party’s far-right flank, whether that’s Pierre Poilievre or Leslyn Lewis, is going to end up replacing O’Toole and his brand of apologetic centrism. And while they may not be electable under all but the most unusual circumstances, there’s one person who is: Doug Ford.

Poilievre, for all of his online memes and snappy tweets, has the personal charm of a mean-spirited Ted Cruz, while Lewis’s embrace of anti-vaccine politics makes her radioactive to the vast majority of Canadians.

But Ford, for all of his failings as Ontario premier, remains reasonably popular — especially in the parts of the country where federal Conservatives need to win to form government. Ford’s appeal to voters in suburban Toronto and other parts of Ontario could be just the thing to break the Liberal government’s stronghold there.

Opinion: The Fords, if nothing else, have always had luck on their side, writes columnist @maxfawcett. #CPC #ErinOToole #CdnPoli

Yes, the unilingual Ford would almost certainly lose a few of the party’s 10 seats in Quebec. But there are far more seats to be gained in Ontario, British Columbia and the Maritimes, where Ford’s aw-shucks shtick might play a little better. As Curse of Politics pundit Scott Reid said, the real choice may be between “smart mean populists and dumb friendly ones.” For better or worse, they don’t come much dumber and friendlier than Doug Ford.

It’s tempting to write Ford off as a threat for that very reason. But with the post-pandemic landscape looking a bit fraught, and the bill for its costs about to come due, the ground underneath the Liberal government isn’t as solid as it might seem.

Ford’s cuddly, pro-business, populist persona could play well in that environment, especially if economic concerns start to eclipse public health fears. And while the CPC may yet split apart at the seams, its members’ hatred of Justin Trudeau might just be enough to keep the party together and buy them time they need to luck into government.

The Fords, if nothing else, have always had luck on their side.

as an ontarian living under

as an ontarian living under doug and the destroyers, I beg you not to fall for his ah shucks schtick and look at his OBSTRUCT MOVES OFF FOSSIL AT ALL COSTS actual policies

Unfortunately, that would play well to the Grade-8 dropouts whether in the oil field, or hoping for new gas jobs in N Ontario.

So the man that the CPC found

So the man that the CPC found too toxic to be campaigning for them during the last two federal elections would have the best shot at winning an election for the CPC. This doesn't make much sense on the surface, but from your assessment, I agree that as soon as the inflation becomes the major concern, his brand of populism may have more chance hit home in the eyes of many.

I think the evidence points

I think the evidence points to a quickly widening fissure in the CPC between fiscal moderates and the social shrunken heads and bullies. The CPC is in danger of splintering into these two camps. Ford may run for the leadership (he's already said no) but will that be before or after the split? I doubt the educated fiscal side would accept him. I also doubt that he would apply for the job of herding cats between the "QAnon nutters" (thank you Andrew Coyne) and blockade supporters. Even Doug Ford sees them for what they are and has actually called them "yahoos" previously for blockading and harassing hospital staff in the GTA.

I think the chances of seeing a rejuvenated People's Party, essentially Reform Party 2, are suddenly looking really good after the trucker "freedom fighters" rescinded the freedom of the citizens of Ottawa with their blockade and hostage-taking tactics -- with the tacit support of the deluded faction within the CPC plus the PPC. Splitting the right will not frighten the Liberals or NDP one bit, regardless of who leads the opposition. Either way, the CPC is setting itself up for a messy diminishment and as a witness to successive (relatively) progressive rule over the nation over the next decade. The unassailable majority of Canadians will not truck, so to speak, or trade with fascism, even a lite version.

As for Poilievre, he handed Trudeau et al a nicely wrapped gift with a bow when he posed with the hostage takers and handed the fringe his already limited credibility on a silver platter. The MP from Ottawa now has to answer to his own constituents whom he openly condoned getting locked down by force and harassed by the convoy, all with a smile on his unthinking face. This is the level of intelligence a new Conservative leader must contend with. Poilievre will see that photo published over and over during the next election campaign.

Unfortunately, Poilievre has been repeatedly elected by Ottawa suburbanites who are not generally reactionaries but are largely representative of the electorate the CPC needs to win. His reactionary mendacity, vindictive manner, and abrasive tone, as well as his relative youth, will probably propel this threat to Canadian democracy to the leadership of the official opposition. The CPC will never again be a voice of moderation in this increasingly polarized political morass, but it will inevitably ascend to power to further damage our prospects of a stable transition to a sustainable world.