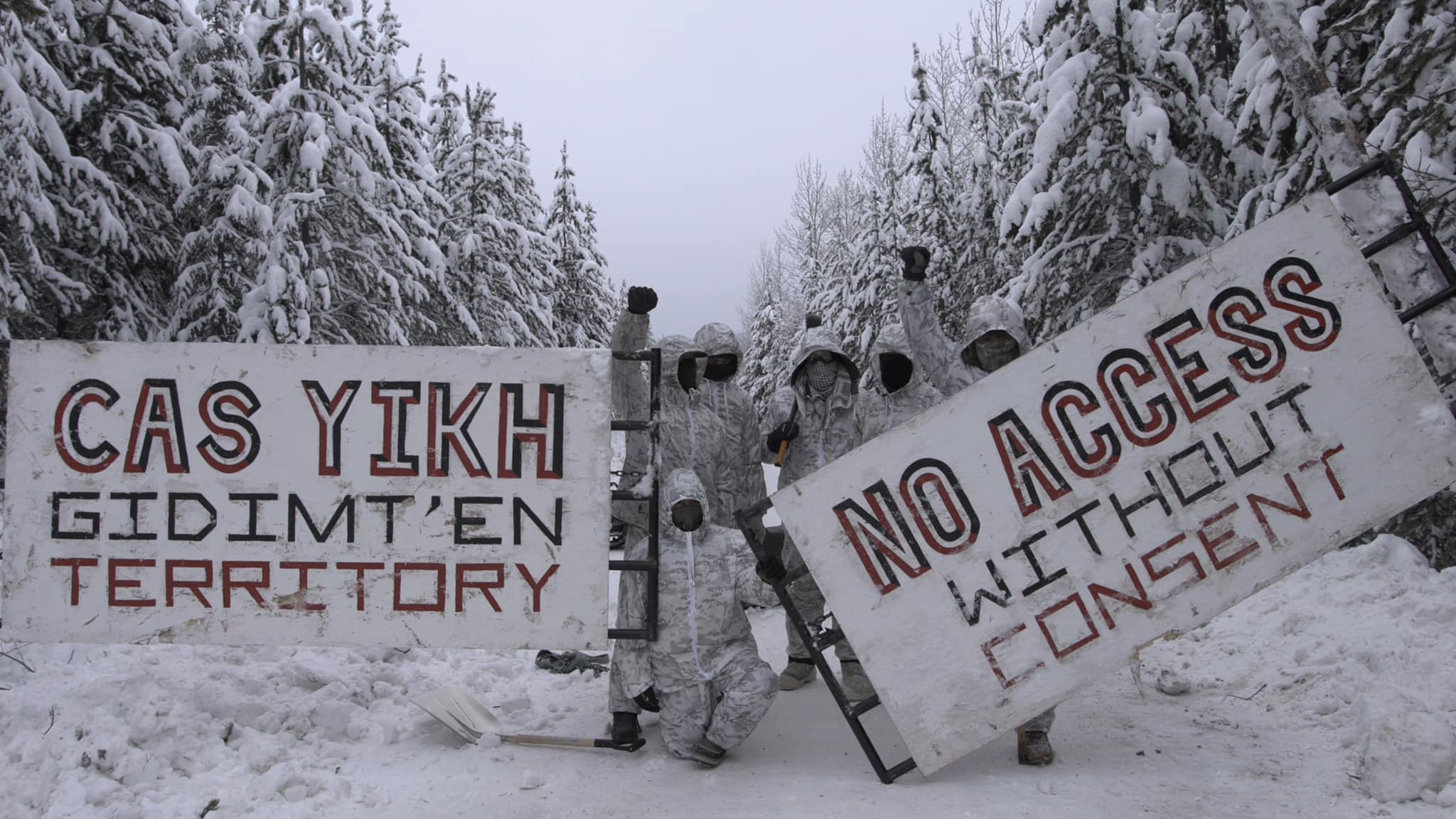 Wet'suwet'en land defenders are calling for the UN to visit the nation's unceded territory to witness the alleged violation of Indigenous rights. Photo via Gidimt'en Checkpoint / Facebook
Previous story
Next story

Gidimt’en land defenders are calling for the United Nations to visit Wet’suwet’en unceded territory to witness the alleged violation of Indigenous rights.

On Monday, the land defenders filed a formal submission to the UN Human Rights Council’s expert mechanism on the Rights of Indigenous People arguing Canada is violating several articles under the United Nations Declaration on the Rights of Indigenous Peoples (UNDRIP). The submission specifically outlines three significant police raids into the Wet’suwet’en yintah in January 2019, February 2020 and November 2021, which led to the arrests of 74 people in total.

“By deploying legal, political, and economic tactics to violate our rights, Canada and B.C. are contravening the spirit of reconciliation, as well as their binding obligations to Indigenous law, Canadian constitutional law, UNDRIP and international law.”

The submission concludes by urging “relevant UN bodies to conduct a field visit to our territory.”

Wet’suwet’en hereditary Chief Woos told Canada’s National Observer the aim is to get a “worldwide vision of what we’re going through.”

“The government is just totally and blatantly ignoring the facts of our law and the rule of law that they themselves are invoking,” he said.

The Wet’suwet’en and their allies are attempting to stop construction of the Coastal GasLink pipeline. Once built, the pipeline would stretch 670 kilometres across British Columbia to transport fracked methane from the Dawson Creek area to LNG Canada’s Kitimat facility on the coast.

The project runs through Wet’suwet’en Nation’s territory and has been opposed by the nation’s hereditary leadership who hold authority over traditional territories.

In 2019, the UN Committee on the Elimination of Racial Discrimination (CERD) called on Canada to stop construction of the Coastal GasLink pipeline, the Trans Mountain expansion pipeline and the Site C dam until free, prior and informed consent was obtained from the nations affected.

Wet'suwet'en hereditary Chief Woos is urging the United Nations to visit the nation's unceded territory because of human rights concerns as the #CoastalGasLink crisis deepens. #cdnpoli

At the time, the CERD said it was “disturbed by forced removal, disproportionate use of force, harassment and intimidation by law enforcement officials against Indigenous peoples who peacefully oppose large-scale development projects on their traditional territories.”

Canada has not made public its response to the CERD, but in November 2020, the UN publicly responded, offering a peek into Ottawa’s position.

Notably, the UN says Canada “provided no information on measures taken to address the concerns raised by the committee,” and that Canada is improperly interpreting UNDRIP. As the letter describes, Canada’s interpretation of obtaining free, prior and informed consent is “to guarantee a process, but not a particular result,” which contradicts the basic premise of consent. The UN asked Canada to respond to its comments by Nov. 15.

As reported by The Tyee, Ottawa neglected to file its response by the deadline and now says it aims to respond sometime this year.

A meeting note dated Oct. 28, 2021, which Canada’s National Observer received through a federal access-to-information request, shows senior federal and provincial officials discussing protests in Wet’suwet’en land and at Fairy Creek. The meeting occurred weeks before RCMP agents launched the November 2021 raid that was catapulted to national and international attention after images of militarized police hacking through the door of a home to arrest land defenders and journalists at gunpoint were published.

The meeting note says the purpose of the meeting is to discuss the protests “and begin the process of identifying and implementing collaborative, horizontal solutions to direct action at major protest sites.” It also references an Oct. 19 meeting between Natural Resources Canada and RCMP Commissioner Brenda Lucki regarding escalating protests against the Coastal GasLink pipeline.

Stéphane Shank with the Privy Council Office told Canada’s National Observer no decisions were made other than to “stay in contact as the situation evolved.”

“Federal and British Columbia deputy ministers met to take stock of the situation regarding protesters blocking the access road used by workers on the Coastal GasLink project,” he said. “They discussed the status of the project, the relationship with the Wet’suwet’en, the status of the discussions between the provincial government, Coastal GasLink, and the Wet’suwet’en, and the potential ramifications elsewhere in British Columbia and across the country.”

On behalf of Brownsey, provincial intergovernmental relations spokesperson Karen Van Marum offered even less information, telling Canada’s National Observer the meeting was an opportunity to “discuss the protests” and “share information, but not make decisions.” Requests for an interview were not returned.

Still, the fact British Columbia has an “LNG Canada Implementation Secretariat” nestled within its energy department to help handle the largest private-sector investment in the country’s history is telling –– as is having the assistant deputy minister in charge of LNG Canada implementation participating in meetings about Coastal GasLink protests.

“It shows clearly that the provincial government has put a certain priority on this,” said Kung.

“It's been a challenge, I would say, for an NDP government that, like the federal Liberals, wants to be seen to be taking a position of leadership on climate and reconciliation while still pushing through these fossil fuel pipelines.”

“Like any other situation worldwide, when the big money hits the area that does all the talking,” he said. “Doesn't matter what kind of environmental laws (there are), if the Indigenous groups are in the way, they'll push them out of the way. Literally, bulldoze them out of the way. And that's what's happening now.”

The LNG Canada project is estimated to cost $40 billion, and Ottawa has encouraged it with hundreds of millions dollars worth of investment to date.

How is the UN to know who

How is the UN to know who represents the Wet'suwet'en?

What ceremony, or recognition event distinguishes an actual hereditary chief from somebody just claiming to be one? Most hereditary-leader traditions have very public, in-the-news ceremonies of coronation or ascension, or whatever, but nobody has seen this for the Wet'suwet'en, not the way the elections of democratic councils are news, are documented and accepted by the whole community.

The various democratically-elected councils that approved the pipeline may not be the accepted leaders as far as land-claims go; but isn't it significant that all those who voted for the pipeline, have been re-elected, since? Some of them, multiple times.

Journalists treat it as some kind of shocking failure of the rule of law that courts have granted injunctions, that police have enforced them...but are the courts just frankly disbelieving that the hereditary chiefs getting all the news coverage, are in fact legitimate representatives of the community?

If chiefs Namoks, Woos, and Sleydo want Canadian and international courts to give them power over this situation, they might want to ask the Wet'suwet'en community for some widespread expression of support, if not a western "coronation"; I just honestly don't know how many Wet'suwet'en they speak for, and I think the courts are fairly sure they speak for few.

John Woodside | Wed, 02/09/2022 - 09:43
In 1997 the Supreme Court of Canada recognized the hereditary leadership as having authority over the nation's unceded land in a case called Delgamuukw v British Columbia. Essentially because the territory was never surrendered, the traditional governance structure that existed long before Canada existed continues to hold authority. So the hereditary leadership is the authority under Wet'suwet'en law, but it's also recognized by Canadian law. In other words, it's long settled who holds authority to consent.

Everybody knows that; not my

Everybody knows that; not my question.

My question is, how do we know whom the hereditary leadership IS?

The Wet'suwet'en constitutional statements on the web pages make clear that "hereditary" doesn't really mean you're a chief just by having the right parents; there's an aspect of community consensus, and a ceremony where the community gathers to acknowledge the elevation.

These stories omit any question of whether our Courts are ignoring Namoks, Woos, and Sleydo because our Courts don't acknowledge their status as the appropriate representatives. That would be very awkward if the Wet'suwet'en community stood behind them. Our courts did not rule on Degamuukw only to then be inconsistent in applying it.

I've seen stories here and there about the status of Namoks, in particular, being disputed, and I don't see anything on those web pages about the date, the ceremony, the community acknowledgment that their status as hereditary chiefs is undisputed. I can't imagine taking a position on the issue, because I haven't seen any independent journalist cover it.

Can the whining about

Can the whining about differences between the traditional systems and the Indian Act band structures please stop?
There have been multiple responses to this old, worn-out plaint. There have been referrals to many web-pages.
Judges of local courts don't have the job of determining whether dispute exists in the methods of determining leadership: that's been decided already by the Supreme Court of Canada. And one of the chiefs you mention as perhaps not having real legitimacy" was in fact one of the plaintiffs in that case that ended up before the SCC.
I think individuals self-admittedly ignorant as to legitimacy of leadershp of a population they are not part of, should probably also stop trying to guess why lower court judges might not uphold judgments of the highest court in Canada. At least in any way that suggests "larger reasons."

I just want to see

I just want to see independent coverage of the dispute that's been summarized as three women claiming to have been stripped of their status. There has been none. I've seen highly biased stories presenting each side, from those affected. None from a party neutral to the dispute. The NO won't touch it.

The one thing I have seen covered, Vancouver Sun, was Na'moks going into a neighbour's yard to shoot her dog dead. I can hardly imagine a more intimidating act in such a small community, an implied threat. It very much reminded me of many people I've known, who get their way by bullying others...and it tended to support the "stripped of titles" story, which basically accused him of bullying.

So I've been on the topic, ever since, in NO comments. Is that guy a hereditary chief because he enjoys the support of his people, or because he declared himself such, and most people are afraid to speak up?

“stay in contact as the situation evolved.” and “the meeting was an opportunity to “discuss the protests” and “share information, but not make decisions.”” sounds a lot like the 'sit back and assess' line from a recent movie.

"Fazil Mihlar, who previously worked with the Fraser Institute". These are the 'revolving door' tactics by corporations. I doubt there is anything 'previous' about this person. He still works for the Koch brother's industries and is only there to ensure the corporate will is done.