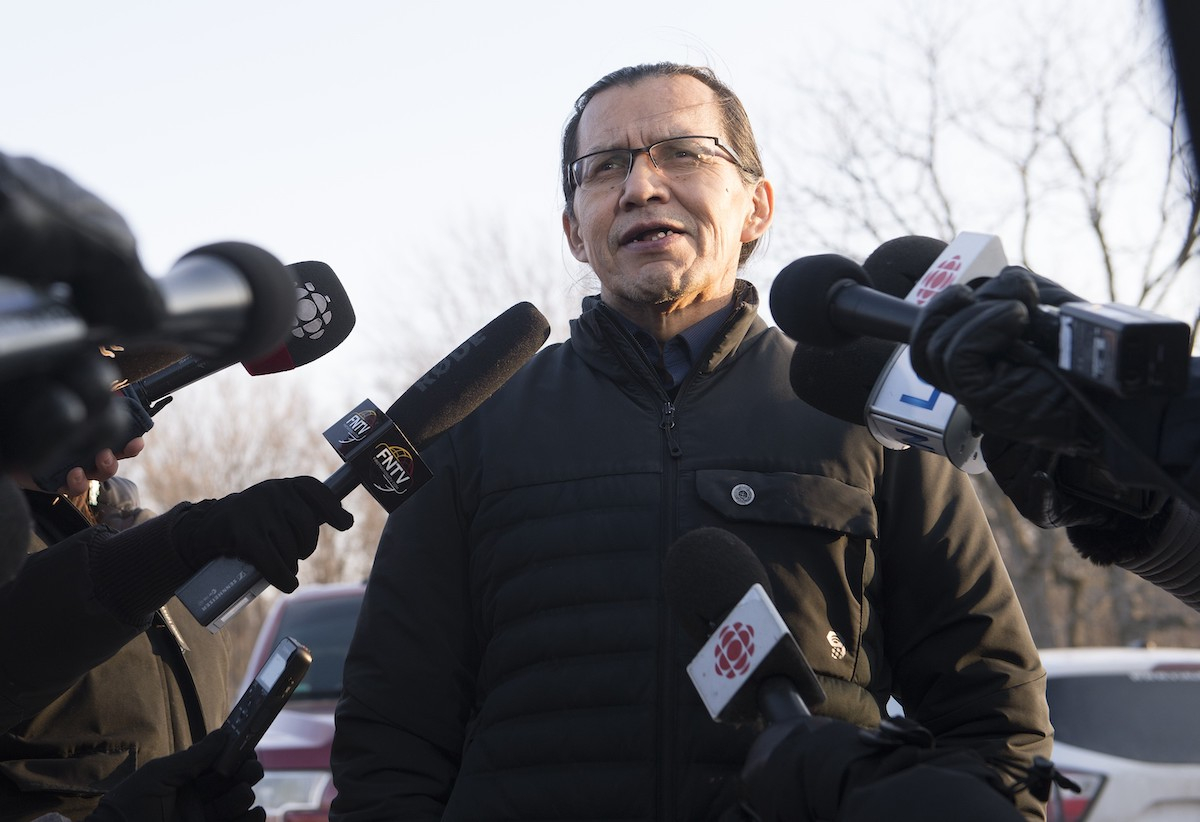 Wet’suwet’en hereditary Chief Woos is taking the fight against Coastal GasLink abroad, calling on international shareholders to divest from the multibillion-dollar gas pipeline.

On Friday, Chief Woos spoke at an annual shareholder meeting of the National Australia Bank (NAB). Last year, NAB pumped $117 million into the company to help it build the pipeline as part of a $6.4-billion loan to Coastal GasLink backed by 27 banks.

“As shareholders of National Australia Bank, you should know that your company is not upholding its own commitments to respect Indigenous and human rights,” he said.

“How do you reconcile your company’s supposed commitments to (the United Nations Declaration on the Rights of Indigenous Peoples, or UNDRIP) while financing a project that is illegal and committing human rights violations and perpetuating the oppression of Indigenous people for the purpose of colonial extractivism?”

NAB chair Philip Chronican responded by saying the bank does look into environmental and social risks on projects, referring to the Equator Principles, but could not offer any specific comment about Coastal GasLink. Instead, Chronican said he could “assure shareholders” the NAB has “no intention” of financing any more oil or gas extraction outside of Australia.

On Sunday, the Gidimt’en Checkpoint said it evicted Coastal GasLink workers from the drill site and had reoccupied Coyote Camp. Coyote Camp is where several land defenders and journalists were arrested a month ago during an RCMP raid.

Gidimt’en Checkpoint spokesperson Sleydo’ also spoke at the shareholder's meeting, describing her recent arrest by the RCMP at gunpoint and being restricted from returning to her territory. The project is contributing to the genocide of her people, she told the shareholders, and asked if the NAB was willing to take accountability for that.

“I’ll just repeat the point that this project was evaluated on the grounds of environmental and social risk at the time it was undertaken, and I have nothing further that I can add at this point of the meeting,” Chronican said.

Chief Woos told Canada’s National Observer that because Coastal GasLink has not obtained free, prior and informed consent from the Wet’suwet’en nation’s hereditary chiefs, who have authority over the nation’s unceded territory, the project is in violation of UNDRIP. That authority was recognized in the Supreme Court of Canada landmark Delgamuukw v. British Columbia ruling, which found Canada did not extinguish title to the land itself, meaning title to the land remains with the nation.

Coastal GasLink did sign agreements with Wet’suwet’en band councils and has received permits to build from the province, but those councils do not have the jurisdiction to grant consent because they were imposed by the Indian Act. The Delgamuukw case recognized the nation’s title to the unceded land flows from its hereditary, traditional governance system, whose authority over the traditional land remains unbroken.

“When the RCMP are violently arresting land defenders and elders, that's on National Australia Bank. It's on RBC. It's on TD. It's on JP Morgan Chase. It's on any bank that has a business relationship with #CoastalGasLink." #cdnpoli

“Everything was done illegally. We were doing our traditional ways of life out here on Wet'suwet'en yintah, and these people came around and started bulldozing … using violence at gunpoint and threatening us,” he said.

“As Wet'suwet'en people, we don't back down on challenges, we've always been known to stand up for what is right. So for us, it's our environment, our ways of life, our traditional ways, so we'd like people to know that globally,” he added.

The Canadian government has been scolded by the United Nations for failing to stop the pipeline construction. In 2019, the UN Committee on the Elimination of Racial Discrimination called on Canada to halt construction of Coastal GasLink, the Trans Mountain expansion project and the Site C dam until free, prior and informed consent was received. The committee said it was “disturbed” by the use of force against Indigenous peoples and “alarmed” by the escalating violence.

In late November, a group of Indigenous rights and climate advocacy groups wrote to Prime Minister Justin Trudeau, saying they are “extremely disturbed” by the continued failure to comply with what the UN committee is calling for, and for treating “serious human rights infringements with a dismaying lack of concern and lack of transparency.”

Stand.earth climate finance director Richard Brooks said NAB is not a special case because it’s just one of more than two dozen banks backing Coastal GasLink. Still, he says it has responsibility like any other.

“When the RCMP are violently arresting land defenders and elders, that's on National Australia Bank. It's on RBC. It's on TD. It's on JPMorgan Chase. It's on any bank that has a business relationship with Coastal GasLink, and they need to remember that,” he said.

Given its influential role in funding the companies that are driving climate breakdown, RBC has found itself as the centre of recent divestment campaigns. In September, a national advertising campaign was launched against RBC by Stand.earth, Greenpeace Canada recently staged a demonstration outside RBC’s Toronto headquarters, and there is an upcoming global week of action against RBC to close out 2021 over its support of Coastal GasLink.

In October, Wet’suwet’en hereditary chiefs wrote to RBC, TD and other financiers asking for a meeting to discuss divesting from Coastal GasLink. To date, the banks have refused, Chief Woos said. In letters returned to the nation reviewed by Canada’s National Observer, both RBC and TD told the hereditary chiefs to try meeting with Coastal GasLink representatives directly.

Chief Woos said he was “not surprised” meetings have been declined, but said increased shareholder pressure could help.

Brooks explained over the past decade that as climate awareness has grown, the influence of fossil fuel companies on governments around the world, including Canada, has weakened. He said credit goes to Indigenous-led and grassroots campaigns against individual projects for raising awareness about the harmful impacts of fossil fuels.

“It's shifted the political landscape … it ended up decreasing the power of the fossil fuel industry so that they are no longer as powerful or have as much leverage over climate policy in Ottawa or in Washington, D.C., as it used to,” he said.

“But who stepped into their place and is continuing to do the old-school business of lobbying for support of this industry … is the banks and other financial institutions who have a really tight relationship with the halls of power in Ottawa, Washington, D.C., and other capitals around the world.

“So I really think the banks are doing the dirty work,” he said.

I would value journalism

I would value journalism about all of the Wet'suwet'en hereditary chiefs. There's been a lot about Woos, Sleydo, Namoks. Can Woodside interview any of the others?

It might be useful for readers, to have a breakdown of the traditional leadership structure.