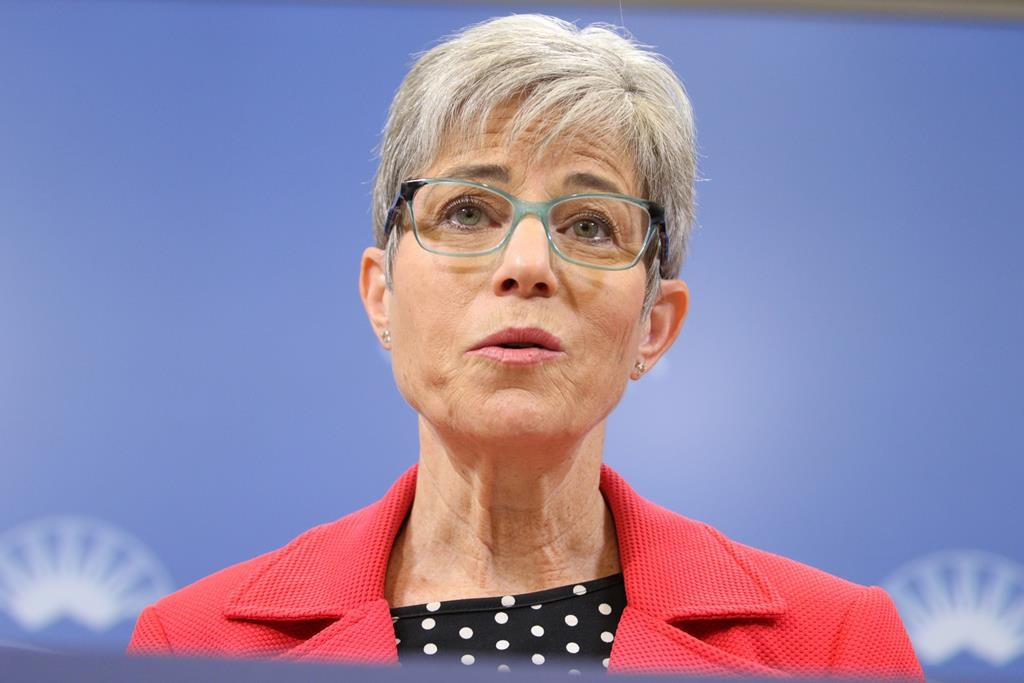 B.C. Finance Minister Selina Robinson is photographed during a news conference ahead of Tuesday's budget at the legislature in Victoria on Monday, February 21, 2022. Photo by The Canadian Press/Chad Hipolito
Previous story

British Columbia has earmarked $2.1 billion to fund disaster recovery efforts and future response to the threats posed by wildfires, floods and heat waves in a budget that forecasts a $5.5−billion deficit.

The budget does not include a total estimate of the recovery costs, prompting the government to add a $1.1−billion contingency fund in its financial accounting for the 2022−23 fiscal year to cover future costs.

“While we have all experienced the realities of climate change this year, I can’t help but think of Indigenous people in the Nicola Valley, farmers in Abbotsford and the residents of Merritt, Princeton and Lytton,” said Robinson, referring to communities damaged by flooding or wildfires last year.

“There is a long road ahead and rebuilding what we have lost is only part of the job,” she said. “We must act now to protect people and communities against future climate disasters.”

Aaron Sutherland of the Insurance Bureau of Canada said the climate funding is an important step to addressing the risks associated with climate change.

“It’s important as a society, we come together and have a frank conversation around how we’re going to better protect our communities moving forward,” he said. “This is the first budget I can think of that really starts to put serious investments into building resiliency into those risks.”

B.C. #budget includes $2.1B in disaster relief; $5.5B deficit for next fiscal year. #BCPoli #ClimateChange

The minister said despite the challenges of the COVID−19 pandemic, climate change and the discovery of unmarked graves at residential schools, the province strives to be economically, socially and environmentally strong.

“We have all learned a great deal over the last two years,” Robinson said. “Through each challenge, we have seen time and time again that we are stronger together. There is a long road ahead as we all rebuild and repair the damage left by these difficult times.”

Families can expect lower child−care costs, she said, adding that the NDP government is "continuing to make progress" towards its promise of $10−a−day child care, with fees to stand at $20 a day by the end of the year.

Smokers can expect to pay more effective July 1, when the government will apply the provincial sales tax to tobacco to offset the costs to the health−care system.

Robinson said forest industry workers and communities affected by the government’s strategy to protect old−growth forests will be eligible for a $185−million program that provides retirement−bridge funds and job training.

"This is possibly one of the most disappointing budgets I’ve had to look at," said Falcon, adding the government has failed to set strategic goals.

He said the government’s plan to spend $27.4 billion on infrastructure over three years, which includes expanding the SkyTrain from Surrey to Langley, lacks timelines and there are no details on construction schedules.

"I look around the Lower Mainland and I can’t see anything new built," said Falcon. "They don’t know how to get big projects done."

However, Falcon said he commends the government for helping forest workers transition from the industry and for extending some youth−care supports to age 27.

Green Leader Sonia Furstenau said in a statement the budget acknowledges the province’s challenges but lacks the vision to deal with the overlapping crises facing B.C.

This report by The Canadian Press was first published Feb. 22, 2022.