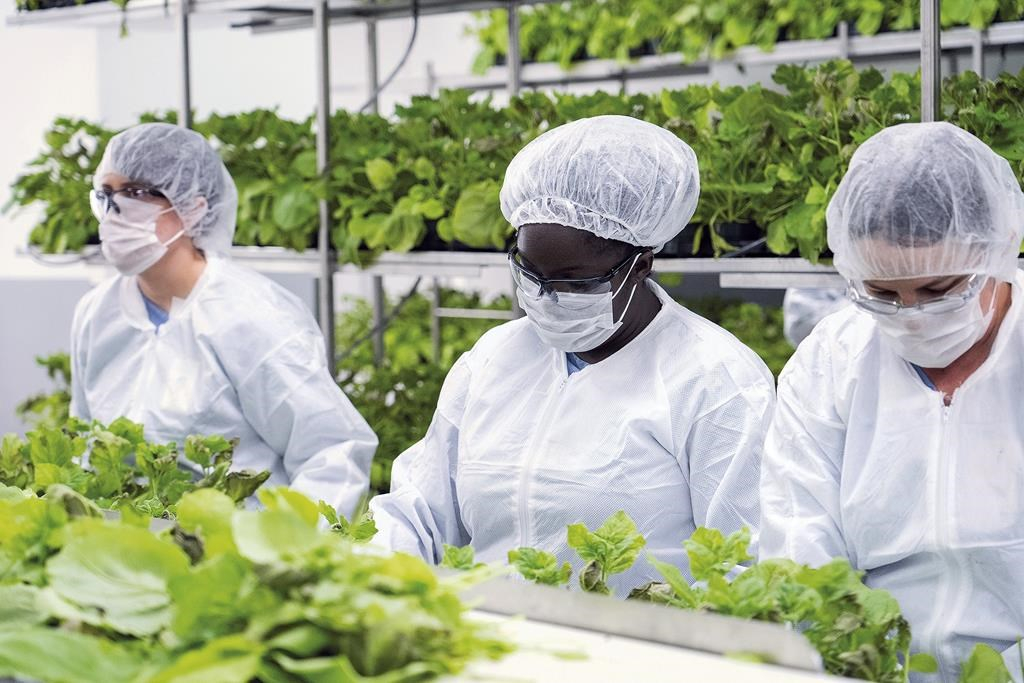 In this 2020 photo provided by Medicago, technicians process plants inside a Medicago facility in Durham, N.C. on Tuesday, Dec. 7, 2021. Handout photo by Gabriel Rancourt/Courtesy of Medicago via AP
Previous story

Health Canada authorized a new COVID−19 vaccine Thursday that it touted as the first greenlit shot to be developed by a Canadian company and the first to be made with plant−based technology.

Known as Covifenz, the vaccine was developed by Medicago, a biotechnology company based in Quebec City that uses a plant host to make virus−like particles which help the body’s immune system make antibodies.

That allows the body to recognize them and spark an immune response.

"The virus−like particles are grown in plants that are similar to tobacco plants, which can produce large amounts of the virus particles in a short period of time," Sharma said Thursday in a virtual press briefing. "Once these particles are injected into the body, they trigger the immune system to produce antibodies against the virus."

Sharma added that the virus−like particles mimic the natural structure of the virus without containing any of its genetic material — "which makes the person’s immune system able to recognize the particles without causing infection."

Sharma said that while other vaccines, including jabs that protect against HPV and hepatitis B, use virus−like particles, Medicago’s COVID−19 shot is the first to use plant−based technology.

Clinical trials suggested the vaccine — a two−dose series administered on a 21−day interval — was 71 per cent effective in protecting against COVID−19 infection one week after the second dose.

Sharma said the trials involved 30,000 participants and the vaccine was 100 per cent effective against severe disease in those studies.

Medicago’s product is authorized for use in people aged 18 to 64, with Health Canada noting its effectiveness and safety in those under 18 and over 64 is still unknown.

Sharma said Medicago is "currently gathering data on older individuals," adding that the company’s clinical trials had limited participants over age 65 because many of them were already vaccinated when the studies took place.

Clinical trials were conducted before the currently dominant Omicron variant of COVID−19 took hold, but Sharma said they did take place while other variants, including Alpha, Gamma, Lambda, Delta and Mu, were circulating.

She said, however, that preliminary laboratory data suggests Medicago’s jab does produce neutralizing antibodies against Omicron, adding that the company is "required to provide data regarding protection against current and emerging variants of concern as soon as it’s available" as a condition of its authorization.

Sharma said mild side effects that are typical of all vaccines were seen in the Medicago trials, with no difference in serious side effects reported between the vaccine and placebo groups.

Dr. Marc Berthiaume, director of the bureau of medical sciences for Health Canada, said the Medicago vaccine is expected to be available by mid−May, though he added "the calendar and number of doses is still under discussion."

Medicago’s jab is the sixth COVID−19 vaccine authorized by Health Canada, following the mRNA shots from Pfizer−BioNTech and Moderna, the viral−vector vaccines from Oxford−AstraZeneca and Johnson & Johnson, and a protein−subunit jab from Novavax.

Novavax’s product was authorized by Health Canada last week, and the National Advisory Committee on Immunization described it in their Feb. 17 guidance as a "new option" for people who were unable or unwilling to receive an mRNA vaccine.

Dr. Howard Njoo, Canada’s deputy chief public health officer, said Thursday that NACI’s preference has leaned towards the mRNA products in the past — "both from an effectiveness point of view but also because of the well−known safety profile."

He said NACI is expected to provide guidance on the use of Medicago’s product within the next couple of weeks.

"It’s not for me to speculate what they will indicate," Njoo said. "Certainly the data is there and they will analyze that."

Health Canada’s online vaccination coverage tracker shows that more than 88 per cent of the eligible population had received at least one dose of a COVID−19 vaccine, with 84 per cent fully vaccinated as of Feb. 13.

Forty−four per cent of Canadians have also received a booster dose.