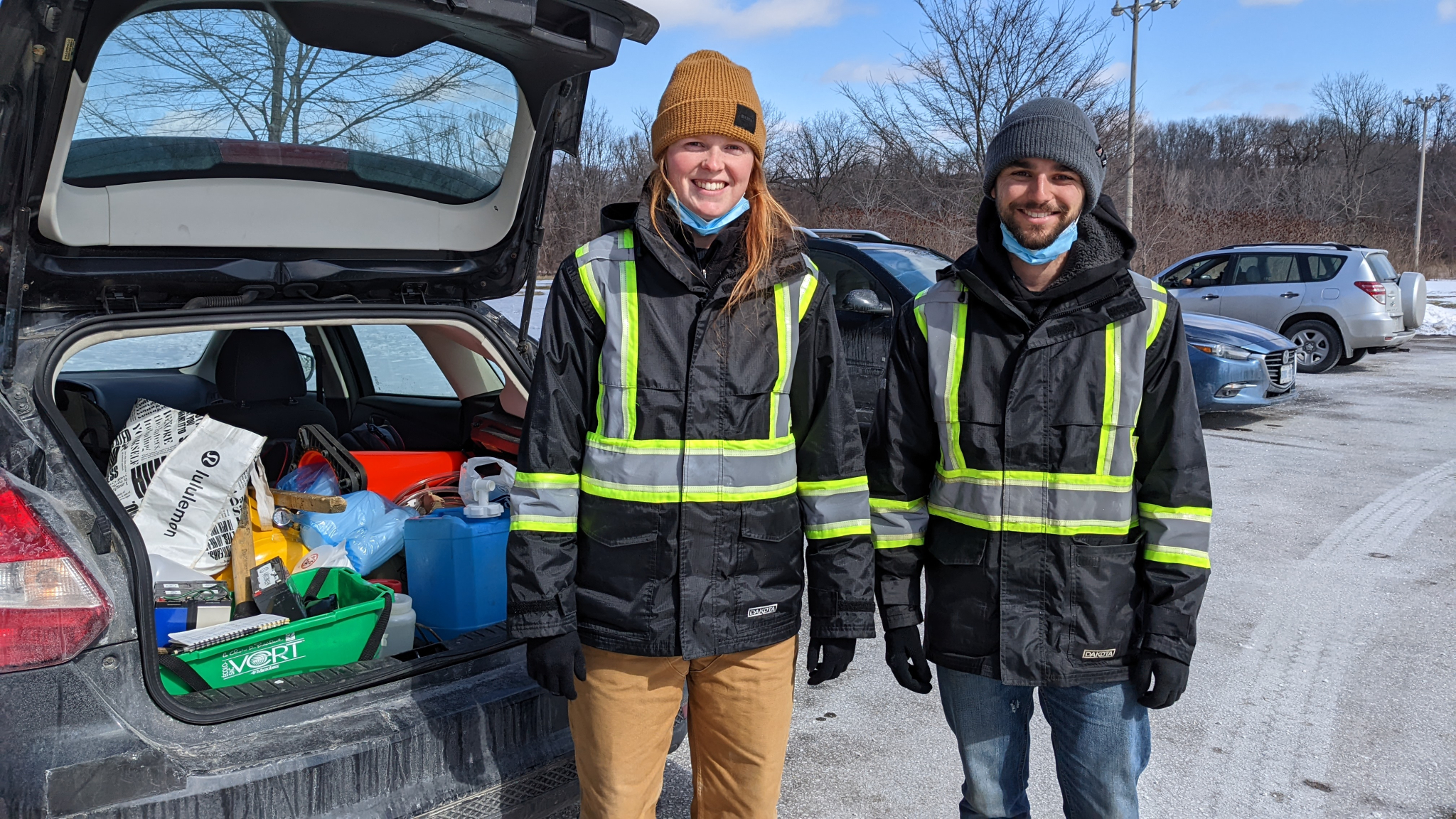 Alexandra Johnston and Eric Anderson with their supplies for the round trip to collect samples from six community sites they make several times a week. Photo by Morgan Sharp
Previous story
Next story

Alexandra Johnston and Eric Anderson take a short walk through crisp snow from the car park to the manhole cover a stone’s throw from the Humber River in Toronto’s northwest.

The pair of recent postgraduates show up here several times a week, part of a more than 100-kilometre round trip to six community sites where they collect wastewater samples to test for COVID-19 levels.

Those samples — and others collected at major treatment facilities in the east and west ends of Toronto and several downtown sites — are key to tracking the rise and fall of infection rates, which are no longer accurately recorded by individual testing.

“There’s always a lovely aroma with wastewater,” Johnston said as she lifts the cover of the sampler box Toronto Water installed next to the manhole and pulls out one of the bottles it had partially filled over a recent 24-hour period.

Alexandra Johnston talks about her work collecting wastewater samples from around Toronto to help monitor COVID-19 levels on a community level. Video by Morgan Sharp

Winter’s frozen temperatures can make it more difficult to get enough samples for a composite, says the 26-year-old, who has worked with her alma mater X University (formerly Ryerson University, currently in the midst of a name change) on the project for almost a year.

On this visit, the site could only offer a one-off "grab sample" for the pair to send back to the laboratory for processing.

(Canada's National Observer will feature a visit to the lab later this week.)

The university (along with the University of Toronto) teamed up with the province, the city’s Toronto Public Health and Toronto Water, and Unity Health’s St. Michael’s Hospital in the surveillance initiative, which has taken on more relevance since Ontario tightened testing requirements at the end of 2021.

Sewage samples collected from manholes, at congregated sites and at treatments plants around Toronto are helping fill the gap in COVID-19 data visibility caused by tighter testing rules.

The site just north of Highway 401 collects wastewater from 100,000 residents living upstream from it.

“We call that a sewer shed,” she explains. “When they use their washrooms or whatever, all that wastewater flows through the sewage pipe, and then we pick it up at this specific location.”

The most recently published Toronto wastewater data shows COVID-19 levels either static or declining. Photo via City of Toronto dashboard

One community site farther upstream collects a secondary sample from one-tenth of the area, providing more specific information that can be cross-referenced with vaccination rates and socio-economic indicators.

There are six such community sites in total, strategically placed around the city to track the variance in COVID-19 showing up in human excrement in different parts of the city. Other efforts track levels at eight facilities in the city, including shelters, long-term care homes, hospitals and campus residences.

The city said on Jan. 28 that its public health department would release some of the data it collects, roughly one month after the province made policy changes that limit who is eligible for PCR testing. It has since made rapid testing more readily available.

For COVID-19 surveillance, wastewater can produce results a few days ahead of clinical data, Johnston said.

She and Anderson collect from the upstream sites while a postgraduate student does three downtown sites, which can’t fit a sampler and instead use a cheesecloth-like filter to collect test samples. 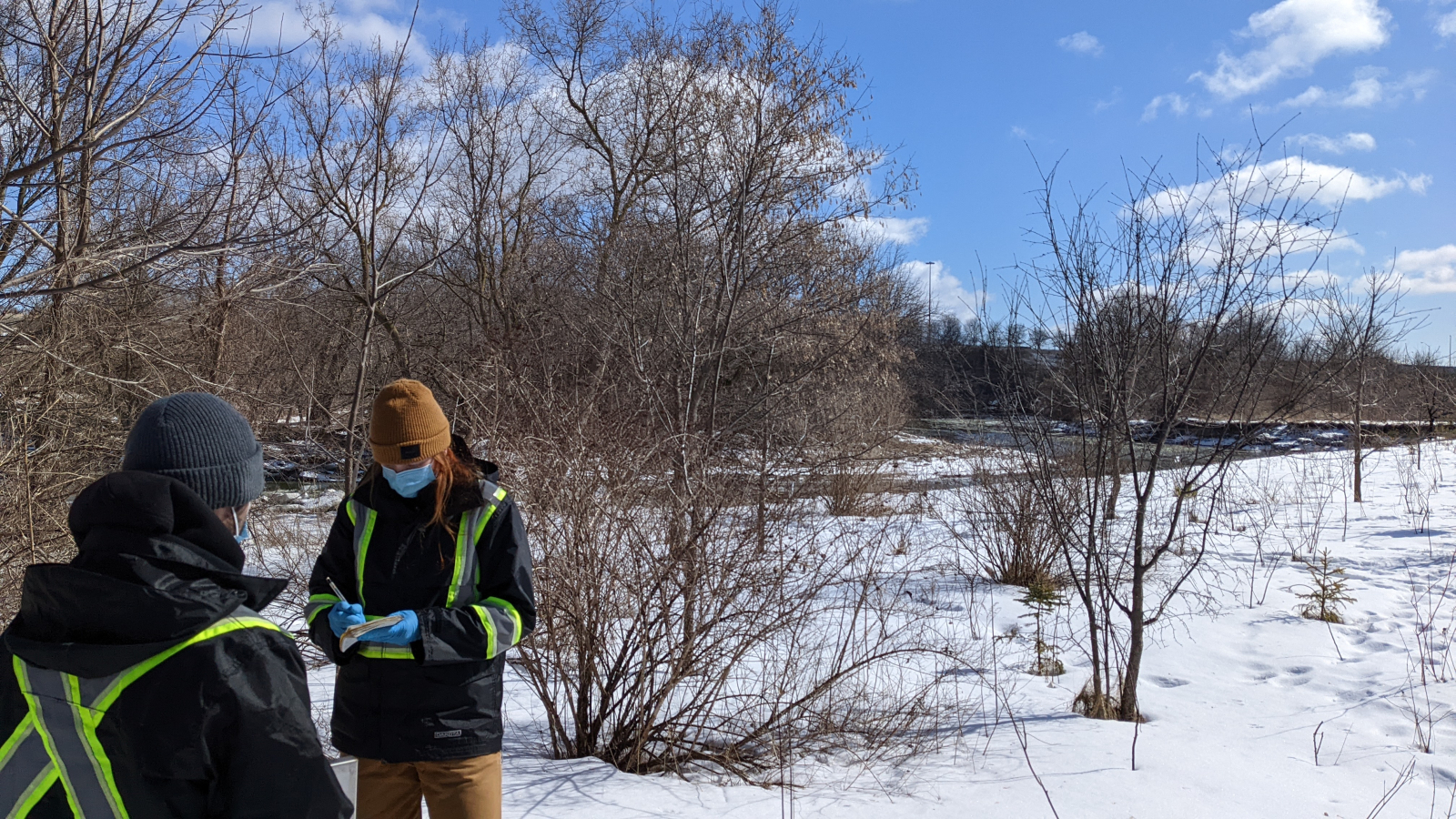 “That gets dropped down the manhole like a fishing line, and it sits in the sewage for 24 hours,” she explains. “And then you go and collect it, and you can actually squeeze all the sewage and all that nastiness out of it and then use that to do the testing.”

I’m impressed with this

I’m impressed with this initiative. one of the saner, reliable initiatives Ontario has taken. Barrie Ottawa and Windsor have been doing it as well since 2020 I think to get province wide variants of infection.
All we need to do it get politicians to listen to the “no way to lie about whether you've got covid or not” results, and make policy based on that. But that would assume their goal is to keep residents safe?