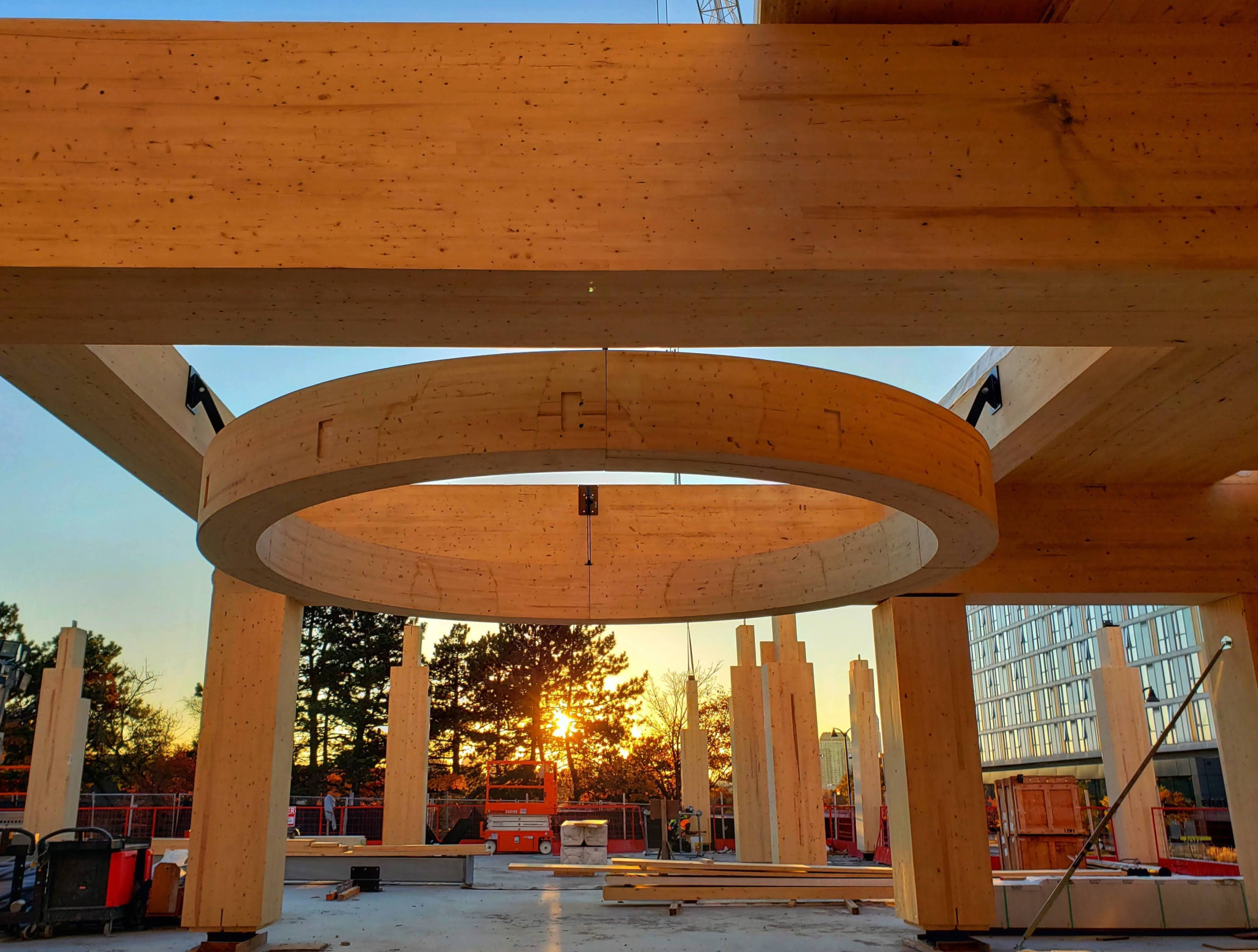 A recent scene at the site of mid-construction addition now being built at Centennial College's Progress campus. Photo supplied by EllisDon
Previous story
Next story

Indigenous narratives and esthetics are woven through the mass-timber construction emerging on Centennial College’s Progress campus, and the young architect behind the work hopes people demand more of that in the country’s future buildings.

Built on the shared territories of the Haudenosaunee and Anishinaabe peoples, the zero-carbon building design incorporates creation stories from each along its main avenue, which leads visitors to a central roundhouse and on to an open kitchen ready for Indigenous faculty in Centennial’s culinary school (and others) to cater feasts.

“They're very intricate narratives pertaining to Indigenous peoples, but the thing is that the whole thing is wrapped in this beautiful geometric pattern reminiscent of snakeskin or fish scales,” Eladia Smoke tells Canada’s National Observer.

In those naturally recurring patterns, the principal at Smoke Architecture said she hoped the college’s multicultural student body will be able to see their own artisanal works and textile patterns.

“We imagine this as a space that — because it is coming from an inspiration that is from the land we all share — as people enter ... they'll feel comfortable and be able to see a little bit of themselves in that space,” she said.

The design incorporates a gentle rise in the topography to create a stepped amphitheatre, mirrored outside and in, that is suitable for classwork or small group meetings based on the weather, Smoke said. The hall is inspired by midewigan, a pre-contact architectural form of simple bentwood framing “that barely encloses the space,” she said.

“It's a teaching lodge, and the way you teach is you refer to inspirations from the natural world,” she explains. “So this is a space that is reminiscent of that because there's lots of glass and then you have this wood framework breaking it up into bays.”

Centennial says the six-storey (150,000 square feet, $105 million) addition to an existing campus building, which is due to open in 2023, demonstrates the college's commitment to reconciliation, Indigenous education and sustainable design.

“At Centennial, we view sustainability, inclusivity and Indigeneity as wholly interconnected and we wanted to create a learning space that demonstrates the importance of that tripartite relationship,” the college’s president Craig Stephenson said in a December update on the project.

“It's a teaching lodge, and the way you teach is you refer to inspirations from the natural world,” says Indigenous architect Eladia Smoke. #CentennialCollege #architecture #Indigenous

As Smoke recalls, the college approached her team with a book of poetry by Chief Stacey Laforme called Living in the Tall Grass and said “manifest this in architecture for us,” she said, laughing.

But the college administration's embrace of Native concepts is an outlier in Canadian architecture, Smoke added.

“I hope people will demand that more because we really haven’t seen a lot of representation of Indigenous narratives, Indigenous esthetics, and Indigenous architecture in our mainstream spaces,” she said.

“As people see projects like (Centennial’s) happen, I hope they will see and perceive and feel that richness, that resonance that happens when you bring in narratives that are of this place.”

The use of mass timber, which is composed of a mix of wood strips laminated together to form strong structural components, was an important component of the project for both Smoke and Centennial.

Made possible by recent changes to building codes, mass timber sequesters carbon while replacing alternatives — concrete and steel — that have a heavy carbon footprint in their production.

“Its zero-carbon emissions design and its ability to store thousands of tonnes of carbon in its sustainably harvested mass-timber ... structure will be an important precedent in both Canada and around the world,” said Craig Applegath, the project principal at design firm DIALOG, another partner in the work with construction company EllisDon.

Unlike steel, which fails all at once around its melting point, wood has a predictable char rate in the case of fire and retains structural integrity well, giving occupants time to escape, Smoke said.

Looking forward to the

Looking forward to the building's completion. I was recently dismayed by the words of a forestry industry spokesperson who referred to wood/wood products as "fibre" destroying the integrity of the once living material. Such industrial reductionism is the baneful influence of humanity's separation from the living world. This "mass" timber, at least respects the elemental nature of the "fibre" and restores to it the dignity of its living precursor.

Thing is, though, there are

Thing is, though, there are already too many forests cut. And so much cut every year that the combination of tree plantations and natural recovery doesn't come close to replacing those trees cut for wood. Wood doesn't "sequester carbon." Living trees sequester carbon in their structure. Wood *is* "sequestered carbon." From a tree that used to sequester carbon, till it ws cut down in order to use the once-living sequestering material of the trree, as wood.