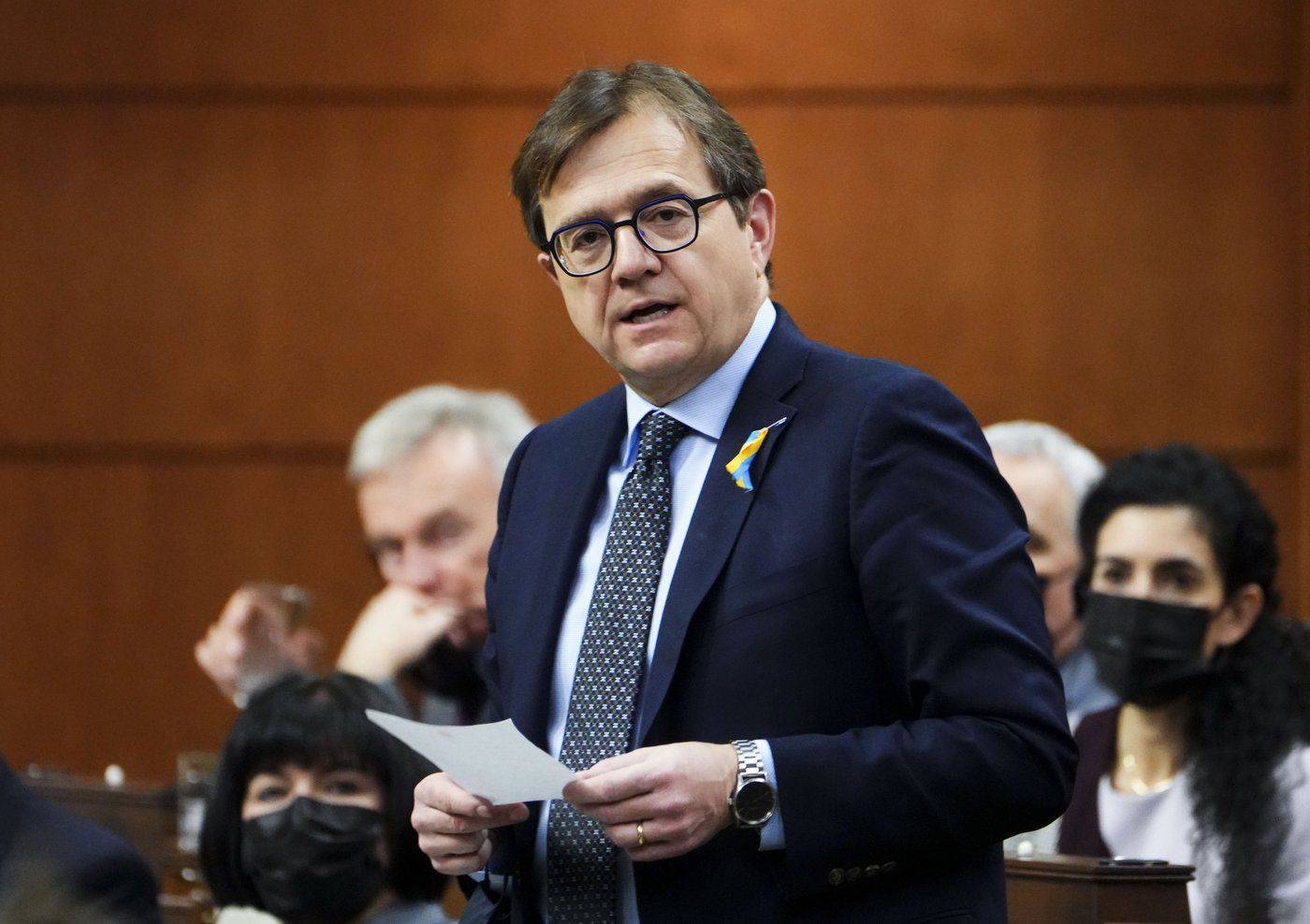 Minister of Natural Resources Jonathan Wilkinson rises during question period in the House of Commons on Parliament Hill in Ottawa on Thursday, March 3, 2022. File photo by The Canadian Press/Sean Kilpatrick
Previous story
Next story

The global energy crisis sparked by Russia's invasion of Ukraine is repressurizing North America's pipeline debate — and Canada's natural resources minister says it offers one more compelling reason for Michigan to abandon its crusade against Line 5.

Even without the supply pressures created by U.S. and Canadian bans on importing Russian energy, Michigan is engaged in a wrong-headed effort to shut down the cross-border pipeline, Jonathan Wilkinson said in an interview.

But with inflationary forces and the import bans pushing energy prices to new records in both countries, he said now would be a good time to pause the hostilities between the state and Enbridge Inc., the pipeline's Calgary-based owner and operator.

"It is something that is not only important to Canada, but it's important to parts of the United States," Wilkinson said of Line 5.

"Canada has supported the proponent very actively … it's now before the courts. And we obviously will have to wait to see the determination. But certainly, we are optimistic because the case is a strong one."

Michigan Gov. Gretchen Whitmer and Dana Nessel, her attorney general, have been trying to shut down Line 5 since November 2020, fearing a leak in the Straits of Mackinac, where the pipeline crosses the Great Lakes.

Canada's not alone in pushing them to stand down.

Republican state senators in Michigan passed a resolution earlier this week urging the governor to embrace policies to foster energy independence, "including ending the state's efforts to shut down Line 5."

Whitmer, Nessel, President Joe Biden, Energy Secretary Jennifer Granholm and others "have pursued policies that have harmed our ability to achieve energy independence, including the president's decision to halt the Keystone XL pipeline," the resolution reads.

"We urge Gov. Whitmer … to immediately cease their efforts to shut down the Line 5 pipeline and instead work proactively to lower energy costs for the residents of this state."

State officials did not respond to media inquiries, but environmental groups in the U.S. were quick to condemn the resolution and defend the government's efforts.

"Michigan shouldn't let Enbridge and the oil industry use the war and humanitarian crisis in Ukraine to keep us from protecting the Great Lakes from a catastrophe," the National Wildlife Federation and Oil and Water Don't Mix said in a joint statement.

"To use Putin's war to promote a dangerous oil pipeline in the Great Lakes at a time when people are dying for freedom and democracy should be condemned by Michigan's political leaders and every citizen."

Some, including Alberta Premier Jason Kenney, have seized on the renewed concerns about North America's energy supply — as well as Europe's ongoing dependence on Russian oil — to resurrect talk about Keystone XL, which Biden cancelled on Day 1 of his presidency.

Canada is widely seen as having limited capacity to increase its output to the U.S., although Ottawa is exploring options in that regard, Wilkinson said.

"We are looking actively at whether there is some incremental pipeline capacity that would allow us to flow additional amounts of crude to the United States, such that we can actually contribute to increasing all supply generally," he said.

"Obviously, the most particular area that is looking to secure additional sources to replace Russian oil is in Europe."

Most experts agree the Biden administration won't be moved on Keystone XL, and even its principal architect and proponent, TC Energy, insists the project is dead and not coming back.

But whether it's Keystone XL or some other similar project, there's an energy reality staring the U.S. in the face that lawmakers seem reluctant to confront, said Goldy Hyder, chief executive of the Business Council of Canada.

"The decision that was made on Day 1 by the administration to cancel the KXL pipeline may have been a political consideration at the time, but we're in a whole new world today," Hyder said Thursday after a day of meetings on Capitol Hill.

"Our view is, if not now, when exactly are you going to take a look at how you secure a reliable supply?"

The White House won't talk about it in detail, but media reports suggest the U.S. is looking to countries with dubious human-rights records — Iran, Saudi Arabia and Venezuela in particular — to offset the impact of the Russian energy ban.

"That may be a short-term fix, because you need oil right away, but in the longer term is an indication that you actually need a friendly ally — ideally, one really close to you," Hyder said.

As an added bonus, Canada's energy producers are "committed to the climate transition sector that is doing everything it can to bring down the emissions from the extraction of fossil fuels."

But not even the threat of a protracted multilateral conflict in eastern Europe could displace the lack of public support for building more pipelines, said Ramanan Krishnamoorti, a chemical engineering professor and chief energy officer at the University of Houston.

"I just don't see the social licence to operate. It's just not there, and it's progressively getting worse," Krishnamoorti said in an interview.

"I think you're going to see more oil by truck and rail in the more immediate term. Should that become untenable, we might see some of the pipelines — the ones that are already there — potentially expanded. But new pipelines, I'd be hard pressed to see that happen."

Biden announced earlier this week a ban on imports of Russian oil, coal and natural gas liquids, part of a punishing suite of economic sanctions in response to Vladimir Putin's invasion of Ukraine.

But he's offered precious few details about how the U.S. will fill the gap, beyond encouraging producers to ramp up domestic production and increasing the country's capacity to produce and run on renewable energy.

The ban on Russian imports comes with the U.S. already battling record-high gasoline prices, part of an inflationary spike brought on by the lasting impacts of the COVID-19 pandemic.