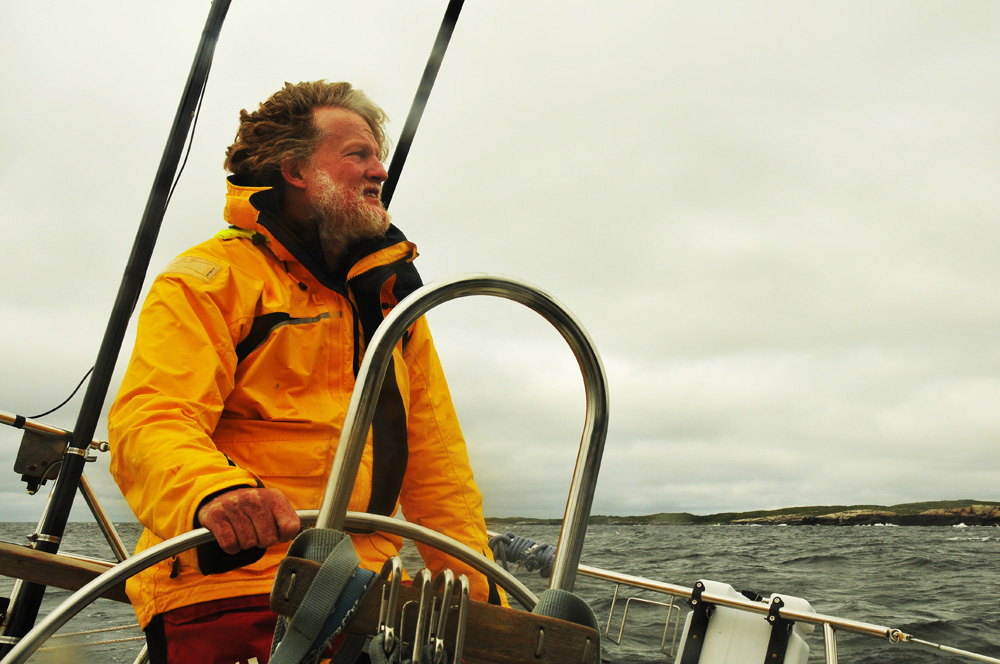 More than 500 kilometres off the coast of Newfoundland and Labrador, marine biologist Hal Whitehead has encountered northern bottlenose whales, dolphins and seabirds thriving in the open ocean. But he’s also seen the potential for all of that to change — if Bay du Nord, the deepest oil production well in Canada’s history, gets approved.

“We would be degrading this spectacular place,” says Whitehead, a professor at Dalhousie University in Halifax.

Whitehead’s research focuses on sperm and bottlenose whales — he’s written books about the culture of the mammals and studied them off the coast of Nova Scotia since 1998. He’s travelled the long distance to the Sackville Spur, the area where Bay du Nord is proposed, three times on a 12-metre sailboat to look for whales with PhD students from the university. In 2015, the team used microphones to confirm their presence and the following year went back and spotted 50 in the area.

A new population of northern bottlenose whales was an exciting discovery for the team, especially when there are just 140 of the species in the Scotian Shelf, an area that spans 700 kilometres southwest of Nova Scotia, where Whitehead has done much of his research.

While spending about two weeks at sea, Whitehead was taken aback by the area’s natural beauty, especially in contrast to its industry. The Sackville Spur is in international waters, and foreign fishing boats would trawl the area as the team looked for whales. Behind the boats, dead fish would sometimes appear, and once — a sperm whale.

A thesis resulting from the trips, Northern Bottlenose Whales in Canada: The Story of Exploitation, Conservation and Recovery by Laura Feyrer, concluded exploitation of the whales so far has left them vulnerable, but that protecting the habitat could be an “effective conservation tool."

“It was sort of a strange time. It was wonderful out there, and at the same time, it was horrible. All these dead creatures, and the booming,” he says.

More than 500 kilometres off the coast of Newfoundland and Labrador, marine biologist Hal Whitehead has encountered northern bottlenose whales, dolphins and seabirds thriving in the Sackville Spur — the would-be site of Bay du Nord.

The area will get a lot busier if Bay du Nord is approved. Currently, Norwegian energy giant Equinor and its partner company Husky are seeking approval for the project, which includes numerous exploration and discovery licences, the creation of a floating oil production station and the drilling of up to 40 wells in the Flemish Pass Basin, around 500 kilometres east of St. John’s. If approved, it would become Canada’s first deep-water drilling site. On March 4, the federal government delayed a decision on the project for 40 days.

The waters off the coast of Newfoundland and Labrador have long attracted commercial interests, says Whitehead, but he notes there’s “been much less attention to what these places are like, what lives in them.”

The abundance of marine life makes the potential of a spill in the area all the more worrisome, says Shelley Kath, an environmental lawyer who investigated Equinor’s environmental impact statement, which provides a breakdown of a project’s potential impacts on the surrounding environment.

Fisheries and Oceans Canada (DFO) heavily criticized Equinor’s initial environmental impact statement but eventually worked with the Impact Assessment Agency of Canada (IAAC), which is tasked with leading the environmental impact assessment process, and Equinor to finalize an updated statement that is now “complete.” It was issued in July 2021.

However, Kath says many concerns raised by DFO scientists simply weren’t addressed in Equinor’s final environmental impact statement. The company doesn’t adequately address the effects Bay du Nord would have on marine life in the event of a surface oil spill or underwater blowout, she adds — notably, what the release of hydrocarbon gas, particularly methane, would mean for the surrounding environment.

If a spill or blowout were to occur, the methane released underwater could essentially suffocate certain underwater organisms through a process called deoxygenation, explains Kath.

Canada’s National Observer reached out to the IAAC with Kath’s criticisms before publishing an article earlier this month. The agency responded two weeks later but did not address specific concerns about the potential harm to marine life.

“Since 2019, DFO has worked with the agency to address the concerns raised in the report, it does not impact the ongoing assessment process,” the agency said while noting the draft environmental impact assessment doesn’t include subsequent advice from DFO.

Both Whitehead and Kath say there would also be impacts from the construction and operation of Bay du Nord. Even if a spill never occurred, they argue, the ecosystem would still suffer — marine life would be impacted by more surveying; the pollution from the operation would affect the surrounding ecosystem.

“It's noisier, it's dirtier,” says Whitehead.

The 200,000 barrels of oil a day Equinor plans to extract from Bay du Nord would also have effects far beyond the Sackville Spur. Canada’s National Observer columnist Barry Saxifrage broke down the proposed project’s impacts and found the oil it produces would release 30 million tonnes of carbon dioxide into the atmosphere each year. Those greenhouse gas emissions would contribute to future global warming.

Meanwhile, the effects of climate change are already ramping up. In the Arctic, for example, the total amount of sea ice has shrunk to less than half of what it was in the 1980s, making it the area most deeply impacted by climate change worldwide — warming at three times the rate of the rest of the world.

“If we continue to green-light and greenwash these horrible polluters, my grandchildren will have nothing to inherit. There won't be any ice to fish on. And as an Inuk, I cannot sit by while that happens,” she said.

“We're the people of ice and snow. That's who we are. And that's who we have been since time immemorial. Destroying the ice is destroying us. Investing in oil and gas is violence against these lands and waters, and it perpetuates the cycles of destruction and colonialism.”

This story has been updated to include information about protecting habitat as a means of conservation for northern bottlenose whales.