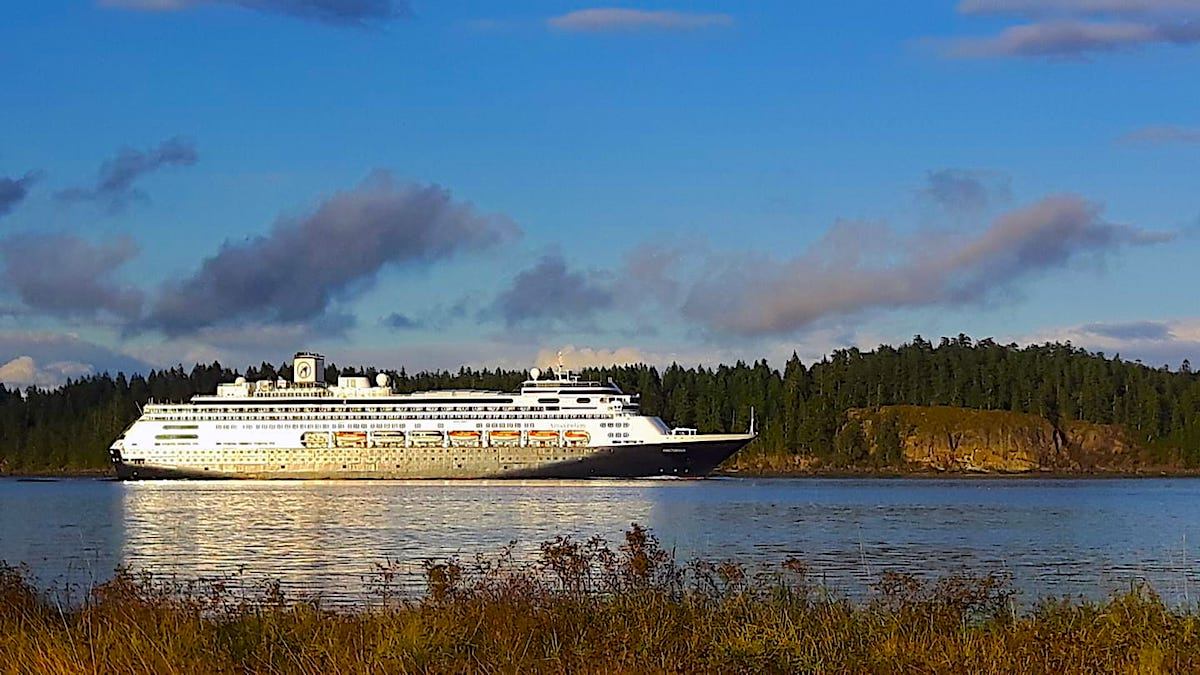 Environmental groups are hoisting red flags as the cruise ship season relaunches after the easing of COVID restrictions on the West Coast despite Ottawa’s recent announcement it will roll out stricter wastewater dumping rules.

“It’s really vague on details,” Barford said of the federal announcement, noting there is no timeline and compliance by the sector will be voluntary until any new rules are in place.

“It’s a great signal and a wonderful show for the environment,” she said.

“But until we actually have the regulations and the proposed language, we're in the same situation where the B.C. coast is still a toilet bowl open for business to cruise ships.”

Transport Canada said it plans to implement stricter measures for the treating and discharging of grey water and black water.

Black water, or sewage waste, contains fecal coliforms, ammonia, chlorine, and may contain a variety of toxic pollutants, such as pharmaceuticals, heavy metals, and hydrocarbons.

While it appears Canada may be aligning some of its sewage and grey water treatment levels with more stringent standards set out in Alaskan waters, it continues to ignore the largest wastewater stream of all, Barford noted.

As cruise ships return after a two-year COVID hiatus on the B.C. coast, environmental organizations expect a continued wave of wastewater to follow in their wake.

More than 90 per cent of the volume of wastewater dumping from cruise ships involves scrubber discharge, she said.

Rather than use cleaner fuels to meet international emission standards, many ships continue to use dirty heavy fuel oil (HFO) — but employ exhaust gas cleaning systems, or scrubbers, that use seawater to remove sulphur dioxide, other contaminants, carcinogens and heavy metals before dumping them overboard.

As a result, the discharge messes with ocean acidification, and heavy metals can accumulate in the food web and harm marine life and cause reproductive disorders in endangered marine mammals, such as southern resident killer whales and belugas, according to the International Council on Clean Transportation.

“Scrubber wastewater is acidic and laden with heavy metals and carcinogens,” Barford said.

“Those don't metabolize there. They're essentially forever chemicals in the marine environment.”

The Port of Vancouver recently moved to ban ships from dumping the bulk of their scrubber wastewater because of concern about the environmental impacts, Barford said.

Ideally, Transport Canada should also be banning the use of scrubbers all along the B.C. coast because it’s simply a workaround for companies looking to keep using cheaper, dirtier fuels, she added.

“Instead of just putting marine gas oil in their tanks — which they're required to do in California — they operate a scrubber and take air pollution and simply put it into the water.”

The cruise ship industry is an important part of Canada’s domestic tourism sector, injecting $4 billion into the national economy and 30,000 direct and indirect jobs, according to the federal government.

The regulations will outline new requirements concerning the minimum distance wastewater can be discharged from shore — now three nautical miles or greater from the coast — along with strengthened treatment levels, said Donna Spalding, spokesperson for the Cruise Lines International Association (CLIA).

Although the new measures are voluntary until regulations are established, CLIA members will adhere to them immediately, Spalding said, adding specifics will likely be outlined to the sector by Transport Canada next week.

However, CLIA members were already exceeding international and national regulations and not discharging untreated sewage into the ocean, even if permitted in some circumstances, she said.

“For grey water, it is already the policy of CLIA member lines to discharge at greater than four nautical miles, a policy they will continue to follow,” Spalding said.

More than 80 per cent of the vessels plying B.C. waters have advanced waste treatment systems and that number will increase to more than 91 per cent by the end of 2022, she said.

Such systems treat wastewater to a tertiary level, a higher standard than some wastewater facilities in many coastal communities in Canada, she added.

There are continuing discussions around plans to install pier-side reception facilities to accommodate cruise ship wastewater.

Regardless of the assurances by industry associations and willingness to report compliance with the new rules, Canada needs to implement stringent monitoring and enforcement measures as well, Barford said.

There have been numerous and repeated environmental violations by the sector in the past, she added, citing the recent and repeated probation violation by Princess Cruises, owned by parent company Carnival Cruise Line, in failing to set up an internal investigation office.

The court-ordered condition followed the conviction of Princess Cruises and a $40-million fine for the deliberate dumping of oil-contaminated waste from one of its ships and a subsequent coverup.

“Voluntary reporting of compliance is certainly something I support,” Barford said.

“But recognizing the actors at play and their storied history, we need onboard observers to enforce the rules.”

The waters adjacent to the Great Bear Rainforest on B.C.’s central coast, already under consideration as a marine protected area, is one such example, she said.

And no dumping certainly shouldn’t be allowed in existing protected marine areas such as the Scott Islands marine national wildlife area located north of Vancouver Island and along the heavily trafficked cruise ship route to Alaska.

The situation is urgent, she added, noting 300 cruise ships are expected in the Port of Vancouver over the summer months, representing an eight per cent increase from ship visits in 2019.

“We need consistent regulations that protect the places that are important to us — for endangered species and for our shared food web,” Barford said.

“Canada’s very trusting of the industry and currently … we are not doing anything to protect ourselves from being exploited.”

Requests for comment were not returned by Transport Canada or the office of Transport Minister Omar Alghabra before Canada National Observer’s publishing deadline.