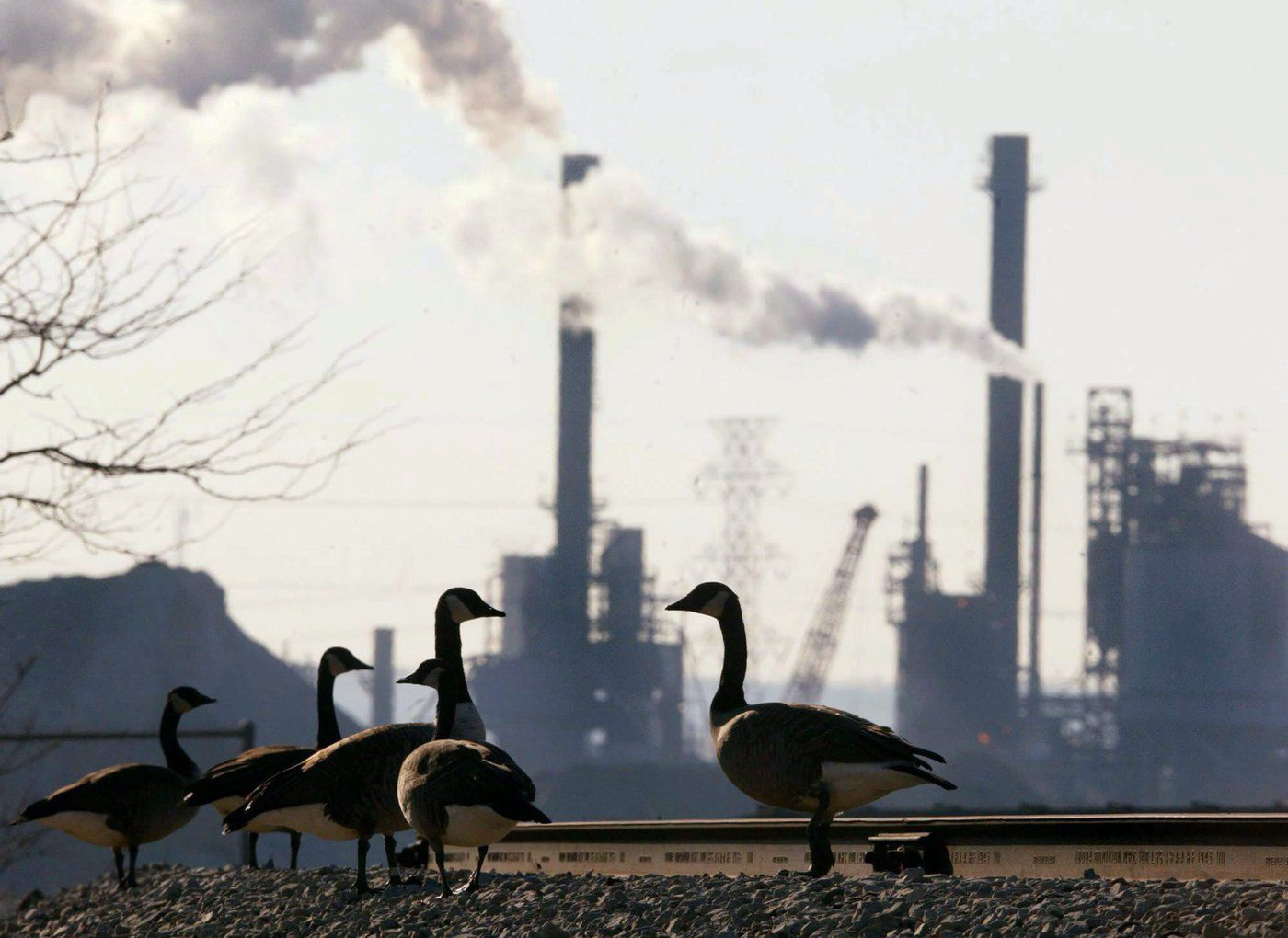 A group of Canada geese stand on railway tracks as a plant operates in the background at Hamilton Harbour in Hamilton, Ont. on Tuesday, December 10, 2002. File photo by The Canadian Press/Kevin Frayer
Previous story
Next story

Big industrial plants in provinces covered by the national carbon pricing system paid more than $161 million for their greenhouse gas emissions in 2019, but some critics say the system is designed to ensure the biggest emitters pay the smallest price on pollution.

"Right now, it looks to me like a lot of the big industrial players aren't doing their fair share," said Keith Stewart, a senior energy strategist at Greenpeace Canada.

Unlike the carbon levy consumers and smaller businesses pay on the fuel they buy, big companies with higher emissions, such as automakers, plastics makers and power plants, pay the carbon price only on what they emit above a set limit.

Like the carbon levy, the industrial carbon price applies only in provinces and territories without comparable systems. In 2019, the first year of the national carbon pricing program, it was in effect in Manitoba, Ontario, New Brunswick, Prince Edward Island, Yukon and Nunavut. It also applied to natural gas pipelines and coal and gas-fired power plants in Saskatchewan.

In total, those affected facilities produced approximately 65 million tonnes of greenhouse gases in 2019. If they had to pay the carbon price — which was $20 a tonne in 2019 — on all their emissions, the cost would be $1.3 billion.

But the government recognized that would be an economic burden and that technology doesn't exist yet for most industries to reduce their emissions to zero.

Instead, most big emitters pay the carbon price on anything they emit above 80 per cent of what the average emissions are in their industry. In theory, this means the carbon price is charged mainly on emissions companies could find a way to eliminate, making the carbon price an incentive to invest in technology that cuts emissions.

Industries that face more foreign competition, such as cement, lime and some fertilizers, have an even higher limit, 90 or 95 per cent of the average.

Facilities pay the carbon price only on emissions above that limit. If they're below that limit they get federal credits they can sell to other facilities that want to offset their emissions to avoid paying the carbon price. The cost of those credits depends on demand.

The most recent annual report on carbon pricing said 250 facilities were registered within the big industrial system in 2019, of which 189 produced more emissions than their limit for a total of 8.3 million tonnes of excess emissions.

Another 37 companies came in under their limit and were given credits for 910,174 tonnes.

The total carbon price paid was $161 million, amounting to about $19.30 per tonne, based on the emissions above the limit.

But Stewart said if you look at their total emissions, the price per tonne is below $2.50, while consumers and small businesses paid $20 a tonne in 2019.

Because of COVID-19, deadlines for reporting on the 2019 emissions year were delayed. There is still no data available publicly explaining how many of the surplus credits given to companies below their limit were sold to companies above their limit in lieu of paying the carbon price. Nor is it clear how much those credits cost.

"This suggests that the marginal price will be high, and thus a strong incentive to reduce," he said.

In Manitoba, Saskatchewan, Ontario, and New Brunswick, big emitters accounted for about 25 per cent of total emissions in 2019, but paid less than 10 per cent of the carbon levies collected. Consumers and small businesses paid the rest.

Consumers do get a rebate from the federal government that for most families is more than their carbon price costs. Small businesses can apply for grants to pay for things that cut back on their emissions.

But big emitters can also apply for grants to fund projects that cut their emissions, paid for by the revenues from the big emitters' carbon price.

Stewart said the government needs to rethink how many emissions industries can produce for free.

A similar recommendation was made last summer by the Canadian Climate Institute, which reviewed Canada's carbon pricing systems for the federal government.

"They are explicitly rewarding the most emissions-intensive facilities in the country to not make the major investments needed to be prepared to compete in a carbon-constrained market."

This report by The Canadian Press was first published April 14, 2022.