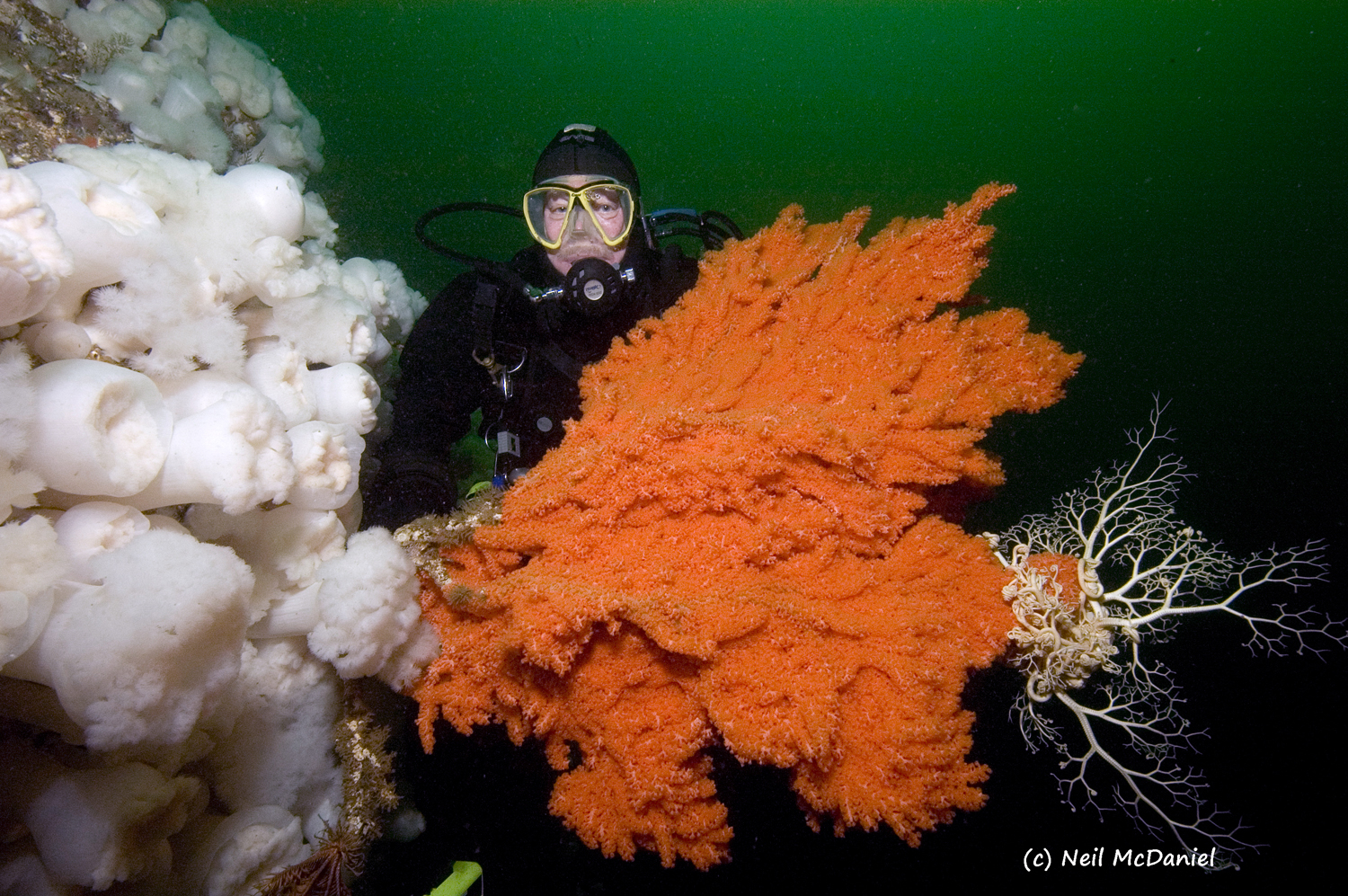 Conservationists and First Nations are calling on the federal government to protect a unique ecosystem of corals and sponges in a remote B.C. inlet. Photo by Neil McDaniel
Previous story
Next story

A remarkable coral garden tucked away in a remote inlet on B.C.’s wild central coast is in danger unless the federal government takes immediate steps to save it from destruction before prawn fishing season gets underway, conservationists say.

Heavy prawn traps and ropes, which make contact with the seabed, are particularly destructive to the delicate red tree corals, or Primnoa pacifica, in a unique area in the centre of Knight Inlet, said professional diver, filmmaker and naturalist Neil McDaniel.

The marine zoologist has been pushing Oceans and Fisheries Canada (DFO) for a decade to close the small section of the inlet to fishing, particularly each spring in May and June as prawn season gets underway.

The large, intricate-fingered corals may take as long as a century to form, but can be destroyed in a moment from contact with fishing gear or anchors, McDaniel said.

McDaniel is perplexed at the ministry’s failure to protect the coral ecosystem, even on a temporary basis, given DFO’s own science supports such a move.

What’s more, both the area’s First Nation and the province have flagged the site for conservation while developing a network of marine protected areas along the northern West Coast.

“I don’t know why DFO is so resistant,” McDaniel said, noting that such large corals in such shallow waters are unmatched elsewhere in B.C.

“When I found out last week [DFO] had no intention of giving the area any interim protection, I was angry about it, to be honest.”

Both marine conservationists and First Nations are calling on the DFO to issue an interim commercial fishing ban in a rare coral hot spot in Knight Inlet.

The move re-establishes the Mamalilikulla’s ancient role as guardians and to collectively make decisions with federal and provincial governments to ensure the well-being of the lands, waters and creatures in their territories, Chief Councillor Winidi (John Powell) recently said.

“They put their own regulations in place, which have gravely failed, as is evident from the devastation in our territory, which has been subjected to logging and commercial fishing on a massive scale for decades,” he said.

A moratorium on commercial fishing in the area has not materialized, Powell added.

“One of the incentives to declare the IPCA when we did is that seasonal openings for prawn and crab fisheries were approaching, and those fisheries can be very detrimental to the ocean floor-dwelling creatures like coral,” he said

“All of these reasons, and more, are why we are taking back our stewardship responsibilities in Gwaxdlala/Nalaxdlala.”

The DFO did not provide a response to Canada National Observer’s query about whether it intends to suspend fishing in the Hoeya Head Sill area to protect the corals.

The federal government has worked closely with provincial, territorial and First Nations communities to advance work to develop a marine protected network in the Northern Shelf Bioregion, or the Pacific North Coast, said ministry press secretary Claire Teichman in a statement.

“We are actively considering how Mamalilikulla First Nation’s IPCA, as well as other sites, can fit into the broader context of reducing harm to sensitive and ecologically important areas in support of the Government of Canada’s commitments to protect 25 per cent of Canadian marine waters by 2025, and 30 per cent by 2030.”

McDaniel said it’ll be quite the irony if by the time DFO actually establishes a marine protected area in Knight Inlet, there’s nothing left to conserve.

“It’s just like closing the barn door after the horses have left,” he said.

“We have several more years, during which time, prawn fishing will carry on … and the corals will be destroyed.

DFO has made good use of targeted fishery closure protections for ancient glass sponge reefs in various parts of the coast, such as Hecate Strait, Howe Sound and the Strait of Georgia, said Jay Ritchlin, David Suzuki Foundation director-general for western Canada.

Such measures are limited in scope and don’t involve the blanket closure of a large geographical area, Ritchlin said.

An interim fishery closure designed with First Nations might close the relatively small area but would still allow fishing in the majority of the 100-kilometre-plus inlet.

“It’s not a big hammer that shuts down everything all at once,” he said.

Such fishery protections are easier to put in place and flexible compared to the lengthy, complex process to get a marine protected area legislated, Ritchlin said.

“I feel fairly confident that if DFO wanted to take that approach … [it] could do that fairly quickly,” he said.

“Species like prawns, red rockfish and other commercial species use it as a nursery or refuge area,” said the Order of Canada scientist who first conducted research in the Knight Inlet area more than three decades ago.

“If you take out such good feeding areas, you might just find your fishing grounds in the region are suddenly not so good anymore.”

A dump of glacial rock made the shoal — as shallow as 65 metres in a fjord often half a kilometre in depth — which experiences strong tidal currents and turbulence that stir up food and create conditions ideal for the coral and other deepwater or rare species, Tunnicliffe said.

In addition to the corals, soft goblet or cloud sponges thrive on the sill along with Townsend eualid shrimp and bigmouth sculpin.

But it’s the Primnoa pacifica coral, usually found in deep water beyond the reach of recreational divers or marine biologists, that’s the main draw, Tunnicliffe said.

“I can tell you, it was a stunning sight,” she said.

“I’ve worked a lot of the coast, and I haven’t seen that density and size of corals.”

A Satellite view of the

A Satellite view of the protected area shows a clearcut much of the Lull Creek watershed. Was this done before or after the indigenous people declared a protected area? Clearcuts in BC's steep terrain are notorious for dumping mud and sediments into downstream areas such as Lull Bay. How does this affect the corals and sponges?

I’m afraid I’m not sure how

Rochelle Baker | Tue, 04/19/2022 - 08:33
I’m afraid I’m not sure how logging the watershed would affects the corals. I assume sediment isn’t great for any static marine creature. But the Mamalilikulla definitely believe watershed damage has wiped out the salmon runs and in turn hurt bears and eagles.

In Fathom Five National Marine Park, the Canada Shipping Act, Vessel Operating Restriction Regulations (VORRs) Schedule 1 are used to protect shipwrecks. Access is only provided by permit issuance. Recent changes to the S. 10.1 in the VORR regulations refer to designating such areas for conservation. This would take 2+ years if Transport Canada was keen on this application so not a short term fix but maybe faster than a DFO MPA. The application would come from the First Nation under the auspices of the IPCA. Food for thought.