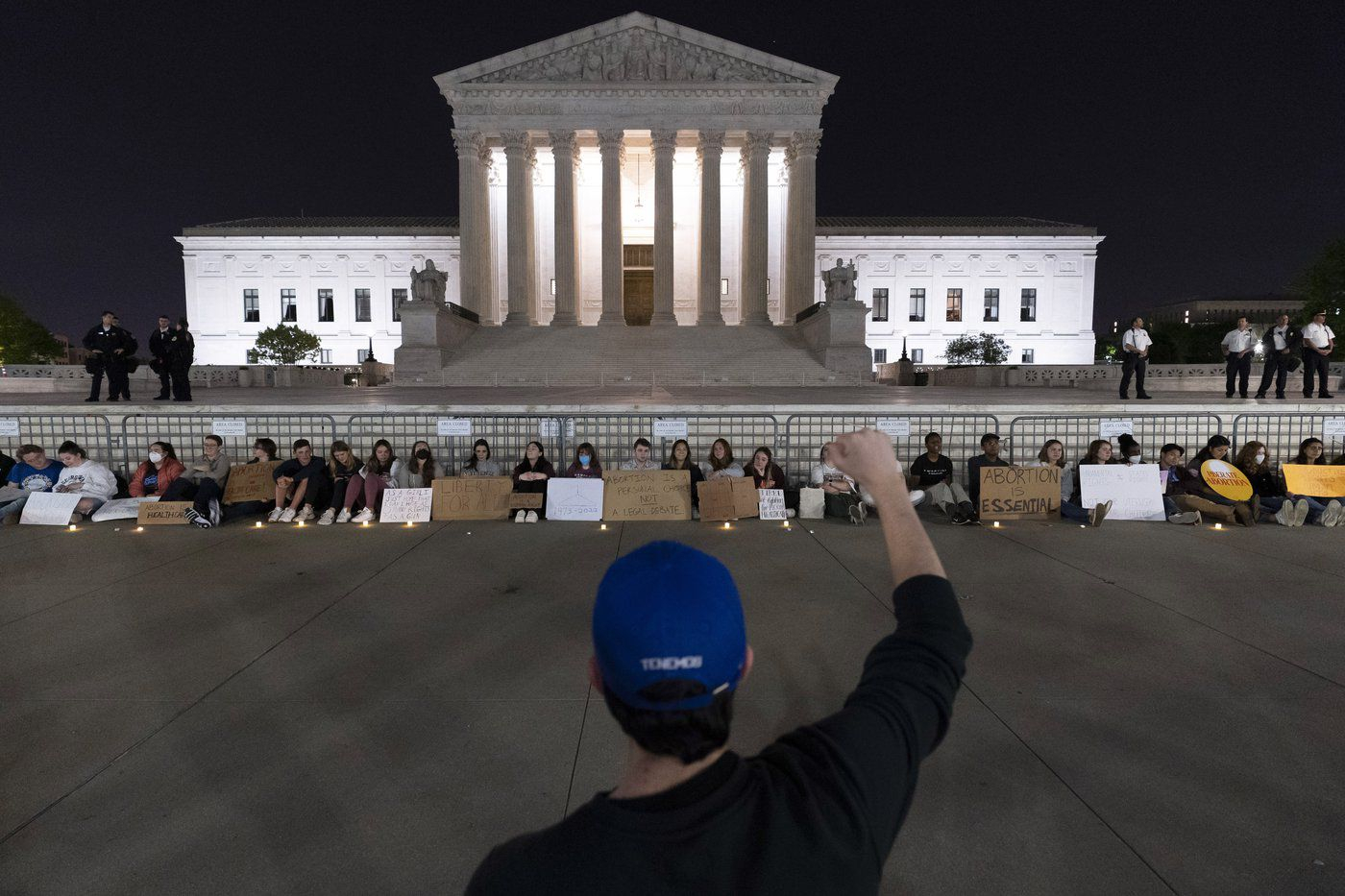 A crowd of people gather outside the Supreme Court early on Tuesday, May 3, 2022, in Washington. Photo by The Associated Press/Alex Brandon
Previous story
Next story

Rescinding the constitutional right to an abortion would be just the beginning, President Joe Biden warned Tuesday as the world confronted anew the possibility that women in the United States are poised to lose the right to choose.

Outside the U.S. Supreme Court, activists on both sides of the abortion debate gathered with equal parts dismay and delight, all of them reeling at the notion that Roe v. Wade, the landmark 1973 ruling, could soon be overturned.

"I remember sitting there stammering, going, 'What?'" said Sonja Morin, an anti-abortion crusader from Massachusetts who happened to be in D.C. on Tuesday to take part in a separate protest.

"I just I couldn't wrap my head around it," said Morin, 19. "It's an optimistic day that we've been waiting for for so long, but it's crazy — and obviously, precedent-breaking that it comes so soon."

On the other side of a narrow barricade, as Capitol police officers kept a wary eye from a distance, a larger crowd of abortion advocates were gathered, just as they had done the night before, shortly after Politico broke the explosive news.

Protesters, pressed for time, were sprawled on the sidewalk using Sharpies to hand-letter makeshift placards out of panels of torn cardboard. One used an old-school ink-and-stencil kit to churn out leaflets reading: My Body, My Choice.

By mid-morning, the high court had confirmed that the draft majority opinion obtained by Politico — penned in February by Justice Samuel Alito, who thoroughly rejects both the Roe decision and a 1992 ruling known as Planned Parenthood v. Casey — was authentic, but still far from final.

Should the core argument survive long enough for the court's final ruling, it would give individual states the power to decide whether abortion should be legal. More than half are widely expected to move quickly to ban it; more than a dozen already have laws on the books that need only the Supreme Court's blessing.

"Roe was egregiously wrong from the start. Its reasoning was exceptionally weak, and the decision has had damaging consequences," Alito writes.

"We hold that Roe and Casey must be overruled."

On the pro-abortion access side of Tuesday's split-screen protests, Jamie Manson, president of Catholics for Choice, said she was more surprised by how the news emerged than by the conclusion the conservative court appears close to reaching.

"Shocking, because this doesn't happen — I mean, leaks of drafts of Supreme Court decisions, what's the story there — but not surprised, because we've been watching," Manson said.

Chief Justice John Roberts said he had ordered an investigation into the leak, which he called an "egregious breach of trust."

It's not clear whether Roberts will support the Alito opinion, side with any of other three Democrat appointees or write his own dissent.

"We know we have five radically anti-choice, Catholic justices on the Supreme Court, so I'm not surprised," Manson said.

"But my hope is that this is a wake-up call for people … I'm hoping this wakes people up to say, 'This is real. And this is happening in the United States of America.'"

Polls have consistently indicated that fewer than one-third of Americans support striking down Roe v. Wade, the Supreme Court decision that has served as both a bedrock precedent for the courts and a lodestar for reproductive rights champions for the last 49 years.

More evidence emerged Tuesday when the Washington Post released a new survey, conducted last week with ABC News, that found 28 per cent of respondents believe the decision should be overturned, compared with 54 per cent who want it upheld.

That divide may go a long way toward explaining the motives behind the leak, particularly with midterm elections coming up in November that are widely expected to be a punishing comeuppance for Democrats.

"The integrity and independence of the Supreme Court is once again under attack," said Senate Minority Leader Mitch McConnell, the Republican from Kentucky.

"I hope that the leaker, who is extremely likely to be found given the limited number of people who have the ability to access early drafts of opinions, will be dealt with as severely as the law may allow."

Biden himself wasted little time Tuesday telling Americans that the stakes are high — and that they will have the power to protect hard-fought rights if they turn out in droves this fall to send Democrats to Capitol Hill.

"It would mean that every other decision relating to the notion of privacy is thrown into question," Biden said as he left the White House for a trip to Alabama. Issues like same-sex marriage and contraception could come under pressure based on the rationale spelled out in the draft decision, he warned.

"If the court does overturn Roe, it will fall on our nation's elected officials at all levels of government to protect a woman's right to choose," the president said in a separate written statement.

"And it will fall on voters to elect pro-choice officials this November."

Biden also signalled a willingness to sign into law a bill that would codify abortion rights, although that would be impossible without control of Congress. The Democrats are widely expected to lose that control before next year.

Sen. Elizabeth Warren, the progressive firebrand from Massachusetts who challenged Biden for the Democratic nomination for president in 2020, struggled to contain her frustration Tuesday in an interview with CNN.

To varying degrees, four of the five Republican appointees on the court indicated during their confirmation hearings that they would respect the precedent established by Roe v. Wade, Warren said.

"Look, I feel really angry about this," she said. "What I feel angry about is that an extremist Supreme Court is going to impose their views on the rest of America."