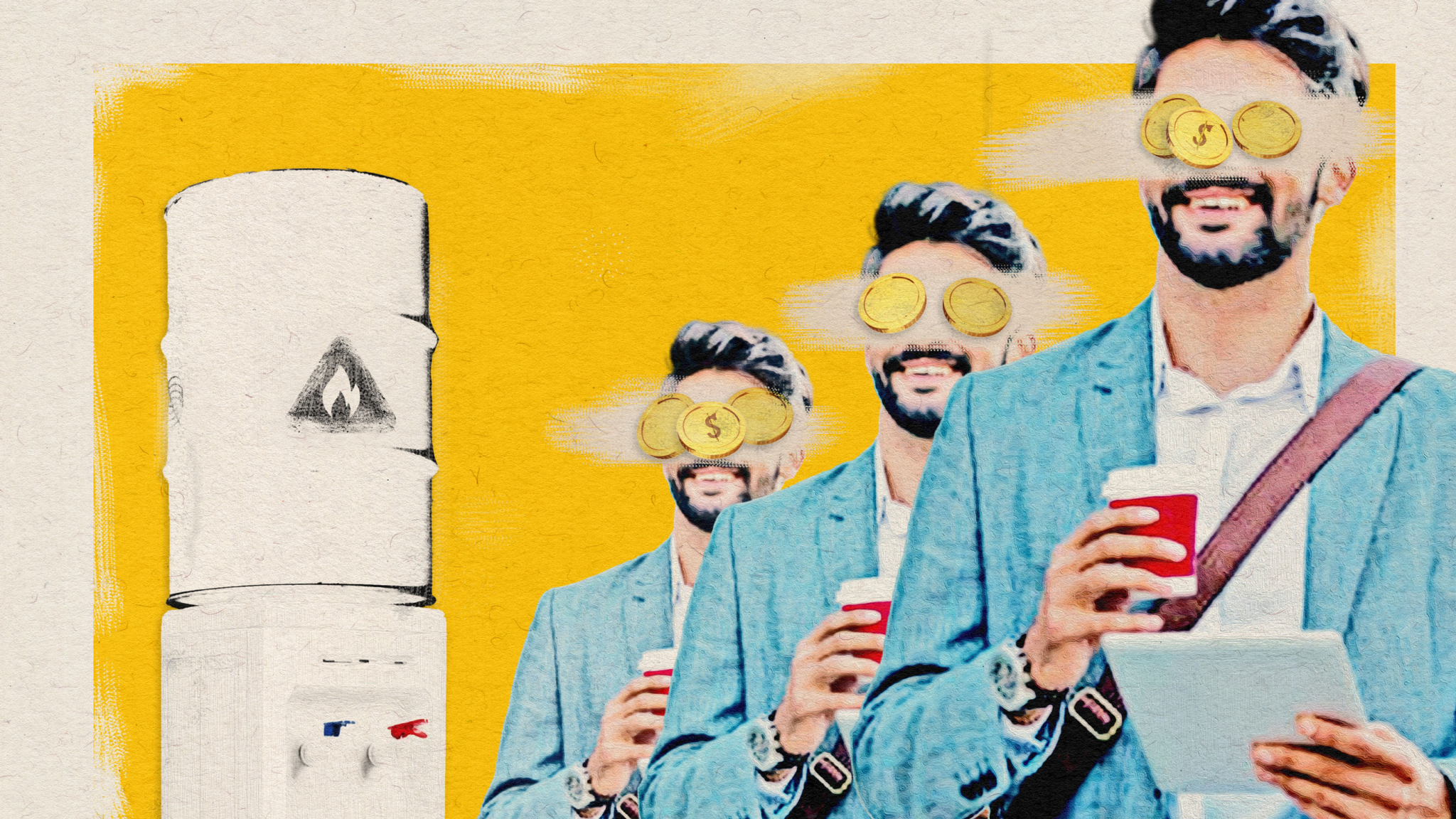 These five banks alone have pumped approximately $911 billion into coal, oil and gas companies since the Paris Agreement was signed in late 2015, and they are on track to cross the $1-trillion threshold later this year. That money is used to expand fossil fuel production, build new pipelines, construct liquefied natural gas (LNG) facilities and more, frequently at the expense of Indigenous rights.

Now, with a global energy transition underway, Canada’s bankers find themselves neck-deep in oil money with a choice to make: Turn their backs on fossil fuels — the main driver of climate change — or continue financing the very activity threatening all life on Earth.

Most banks don’t appear to want to make this choice. Instead, they’re trying to thread the needle by delaying climate action so there’s more time to squeeze revenue out of existing investments that can’t transition to a world without fossil fuels. Unfortunately for them, and us, time is running out to slash greenhouse gas emissions in half by 2030 — the only way scientists say the planet can buy time to prevent catastrophic warming.

Last year, the Big 5 banks loaned or invested $165 billion in fossil fuel companies, representing a leap of $61 billion — a nearly 60 per cent increase — from their collective investments in 2020, according to data compiled by a network of civil society groups.

Banks have also promised to scale up sustainable financing, recognizing the financial sector has a vital role to play in limiting global warming to the Paris Agreement’s goal of no more than 2 C, and as close to 1.5 C as possible. RBC has promised to lend $500 billion to sustainable projects by 2025, for instance, and Scotiabank aims to have made $350 billion worth of climate finance available by 2030.

At the same time banks are pledging to scale up sustainable finance, climate advocates warn greenwashing is damaging the credibility of the entire concept of “sustainable” finance. For example, RBC provided “sustainable” financing to oil and gas company Tamarack Valley Energy in February to buy Crestwynd Exploration Ltd. — another oil and gas company. Clearing up what counts as “sustainable” is one of the recommendations outlined in the Expert Panel on Sustainable Finance’s 2019 report to the federal government, but to date, there hasn’t been meaningful progress, leaving banks to craft rules that suit themselves. Experts say the lack of clear regulation is holding back investments that could bring emissions down because investors want certainty.

As the world navigates an energy transition, Canada’s bankers find themselves neck-deep in oil money with a choice to make: Turn their backs on fossil fuels or keep financing the very activity threatening all life on Earth. #FinancingDisaster

This work is already being done internationally. Last year, the European Union agreed on an initial sustainable finance taxonomy to create a “common language” for investors looking to compare apples to apples. The United States is taking steps in this direction, too.

Undoubtedly, Canadian banks are playing an outsized role in fuelling the climate crisis by lending fossil fuel companies tremendous amounts of cash to build out infrastructure and lock in carbon emissions. But where exactly does that money go?

Other energy giants like Suncor, Shell, Kinder Morgan, Teck Resources, ConocoPhillips, and AltaGas have also all received billions of dollars from Canada’s largest banks since the Paris Agreement was signed.

Canada’s fastest-growing source of planet-warming carbon pollution, the oilsands, received $21 billion from Canadian banks, representing a 51 per cent increase in financing from the year before.

In a report published last year called Fossilized Finance, the Canadian Centre of Policy Alternatives (CCPA) details how Canada’s Big 5 banks support the expansion of the fossil fuel economy by lending to, investing in and advising companies on major projects. Borrowing from Globe and Mail investment analyst Tim Shufel, who called the banks a “comfortable oligopoly,” the CCPA report spells out how Canada’s major banks use their sheer market dominance to enrich themselves through fossil fuel investments, becoming some of the largest and most profitable companies in the country.

Despite a “difficult” 2020, the report finds RBC, TD, BMO, Scotiabank and CIBC closed the first year of the pandemic with $41.2 billion in profit, down 11.6 per cent from the previous year. Key to their profits are fossil fuel investments: as documented by the Corporate Mapping Project, the Big 5 banks are among the largest owners of fossil fuel companies in Canada. Moreover, these banks are collectively among each other’s largest shareholders. For example, TD, BMO, CIBC, and Scotiabank (through its subsidiary 1832 Asset Management) are all in the top 10 owners of RBC. Likewise, RBC, BMO, CIBC and 1832 Asset Management are all in the top 10 owners of TD. It’s a similar story at BMO, CIBC and Scotiabank, where the Big 5 own billions of dollars worth of shares of one another.

Though the Big 5 compete with each other to lead financing deals, they often work together on major fossil fuel investments, forming financing syndicates to supply the amount of money needed. Take the Coastal GasLink pipeline, which is tapping a $6.4-billion loan to finance its construction. BankTrack identifies 27 financiers of Coastal GasLink, including all of Canada’s big 5 banks. Additionally, RBC, BMO, Scotiabank, CIBC and TD provided $200 million worth of working capital to Coastal GasLink. Or consider the groups behind a $1.1-billion “sustainable” financing deal with fossil fuel giant Enbridge: the investment arms of RBC, BMO, TD, CIBC, Scotiabank, National Bank of Canada, Dejardins, HSBC and ATB Financial, as well as Merrill Lynch Canada, a subsidiary of Bank of America.

For major fossil fuel investments, Canada’s largest banks all get a cut. However, two banks in particular find themselves in a special position. Both RBC and TD are Canada’s only banks to find themselves on the ranking of “global systemically important banks” compiled by the Switzerland-headquartered Financial Stability Board, which monitors the global financial system. It’s a fancy term basically meaning the banks are considered too big to fail. Because of how exposed they are to fossil fuels, if we were to phase out oil, gas and coal at the pace required to prevent catastrophic warming, these banks could lose billions of dollars.

Because new fossil fuel projects require millions — if not billions — of dollars of upfront investment, it typically takes decades to recoup that money. That means the pace of the fossil fuel phaseout could make a big difference in how much banks stand to lose in the energy transition.

That’s because of stranded assets — pipelines, drilling platforms, refineries and the oil and gas still underground, yet to be tapped, that will no longer have the same value once we move to a low-carbon economy. When the world switched from candles to light bulbs, for example, much of the infrastructure behind the candle industry was suddenly worth a lot less. It’s a similar problem to today: as more renewable energy projects — solar arrays and wind farms, for instance — are brought online, fossil fuel operations can be displaced. The Bank of Canada is explicitly warning this is a serious risk for financial institutions.

Independent financial think tank Carbon Tracker pushed the concept of stranded assets into the global climate conversation in 2013, but the organization is clear that’s only one side of the coin. Oil and gas companies are also required to pay the cleanup costs for drilled wells. If there wasn’t an energy transition on the way, companies could assume there was plenty of time to put away the necessary cash for those costs. However, that isn’t the world we live in. As we decarbonize, companies will have to pay to plug wells, as just one example, sooner rather than later. The risk here is what Carbon Tracker calls a stranded liability.

Someone will have to pick up the tab for cleanup, and the existing incentives for companies delay an energy transition. Think of it this way: if you run an oil company, what financial incentive do you have to clean up a well today if you could delay that cost into the future or shirk it entirely?

Fossil fuel companies are required by provincial regulators to close inactive wells, but that responsibility has frequently been offloaded to the public. The Parliamentary Budget Officer estimates the cost of orphan well cleanup to the public could reach $1.1 billion by 2025.

How does this affect banks? It’s all about how much money the fossil fuel company has. The more cash companies are required to squirrel away to clean up the mess, the less money they have to pay dividends to shareholders and pay back banks. When the government picks up the tab with taxpayer money, it effectively subsidizes the fossil fuel industry.

It’s important to see how stranded assets and stranded liabilities interact to understand how this is a ticking time bomb. As the world decarbonizes, an oil company could see its value plummet as its assets become worth a lot less. At the same time, liabilities in the fossil fuel industry are set to skyrocket. If the energy transition isn’t properly managed, this could mean fossil fuel companies defaulting on loans because they don’t have the money to pay for their expenses, which will affect the balance sheet of banks and ripple out into the broader economy.

This carbon bubble is set to burst, but it’s not yet clear how well the fallout could be contained. If we manage the transition well, it will be just a bump in the road. If we don't do anything, we'll be dealing with much bigger shocks and much greater consequences.

Well, rather than trusting

Well, rather than trusting them to make up their billionaire banker minds to do the right thing, we could make things easier for us and, in a way, them, by taxing all that fossil fuel cash away from them and having the government spend the money on renewables.
Or nationalize 'em. I'd be fine with that too.

Article: "Because new fossil fuel projects require millions — if not billions — of dollars of upfront investment, it typically takes decades to recoup that money. That means the pace of the fossil fuel phaseout could make a big difference in how much banks stand to lose in the energy transition."

So, basically, we are hooped. Fossil fuel lock-in.

Climate change is the biggest market failure in history. Governments and politicians are controlled by the corporations that profit from this failure.
This story does not end well.