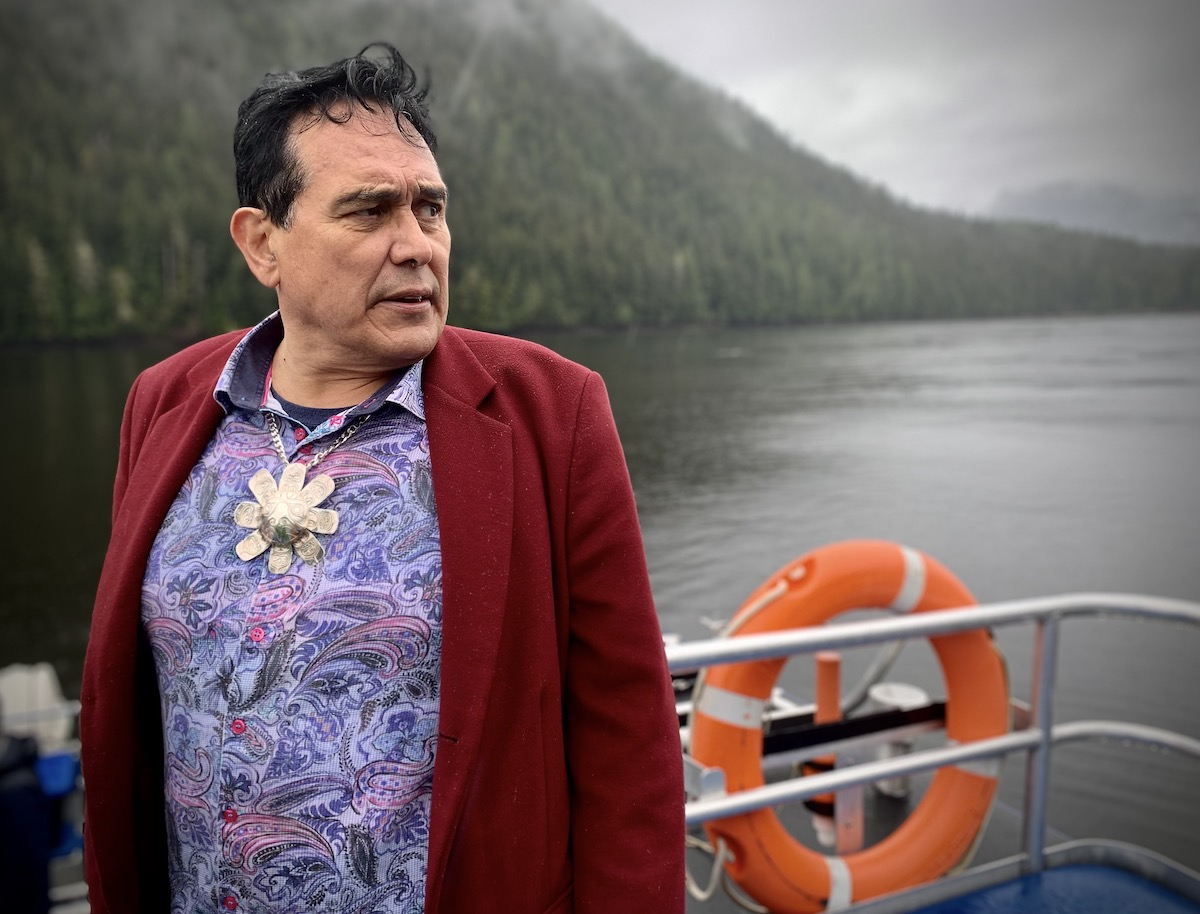 Mamalilikulla Chief Winidi, or John Powell, says the IPCA in Knight Inlet will not only save vital ecosystems but restore the nation's spiritual connection to sacred territory. Photo by Rochelle Baker
Previous story
Next story

The sound of singing and drums rang across the ancestral land and waters central to the origins of the Mamalilikulla First Nation for the first time in over a century on Thursday.

More than 100 members and guests made the long boat journey to Gwa̱xdlala/Nala̱xdlala — (Lull Bay/Hoeya Sound) in Knight Inlet on B.C.'s isolated central coast — to mark the Mamalilikulla’s ceremonial return to the ancient village site as the stewards of their territory.

Impervious to the grey skies and drenching rain, the Mamalilikulla celebrated the nation’s dedication of 10,416 hectares of land and sea in their traditional territory as an Indigenous Protected and Conserved area (IPCA).

Beyond laying strong foundations for reconciliation and conservation, the IPCA re-establishes a spiritual home for a nation displaced and scattered by colonial policy, said Mamalilikulla Chief Councillor Winidi, or John Powell.

“It is a means of restoring and maintaining our connection to the land, seas and skies, and the natural, cultural and spiritual resources within the IPCA,” Powell said.

The nation’s ties to the region are strongly reflected through oral and written history, Powell said, some of which include colonial records rejecting Indian reserve proposals for lands along Knight Inlet and on either side of the Lull River and its critical estuary.

By the early 1970s, the last remaining members of the nation were displaced from their traditional territory and Village Island, many lost to the residential school system.

Most Mamalilikulla First Nation (MFN) members have grown up outside of their traditional territories, Powell said.

“Very few have ever been here to Gwa̱xdlala/Nala̱xdlala,” he said, momentarily overcome by emotion.

The Mamalilikulla First Nation's declaration of an Indigenous Protected and Conserved Area also re-establishes a spiritual home for a people displaced and scattered by colonial policy, says Chief Councillor Winidi, or John Powell.

“To have so many of our community members here today, to begin this reconnection, touches my heart.”

The protected area includes three ancient village sites and other areas of archeological importance, such as shell middens, fish traps and petroglyphs.

The vital Lull and Hoeya watersheds and estuaries are critical salmon habitat, vital foraging areas for grizzly and black bears and important for birds such as the endangered marbled murrelet and secretive northern goshawk.

However, the region’s watersheds — which in the past hosted abundant populations of spawning salmon and Knight Inlet eulachon runs — have been decimated by industrial activity such as logging and commercial fishing.

The Mamalilikulla will now protect and enhance the IPCA in accordance with the ancient law of Aweenak’ola, Powell said.

“Our ancestors … gave us the responsibility to steward this land — our seas and our skies and our connection to the supernatural — and to protect, defend, nourish and house all the creatures who come from all of those elements.”

Acknowledging the B.C. government as an ally in the IPCA process and a delegation of staff from the Ministry of Forests and the newly established Ministry of Land, Water, and Resource Stewardship, Powell announced the nation had just signed a letter of commitment with the ministries to work out an agreement on joint decision-making in the region, as well as land management and long-term funding plans.

Powell also thanked Chief Robert Joseph, Reconciliation Canada ambassador and member of the Order of Canada and B.C., for hosting the ceremony, as well as the neighbouring nations for their attendance and support of the IPCA.

Absent from the proceedings were any representatives from the federal government — in particular anyone from the Department of Fisheries and Oceans Canada (DFO).

A unique biological hot spot of cold water corals and sponges in Hoeya Sound are included in the marine aspect of the IPCA, Powell said, but the Mamalilikulla have made no headway in getting co-operation from the DFO for a moratorium on commercial fishing around the fragile marine ecosystem.

“If there is one disappointment we currently share, it is the inability to attract any dialogue with (DFO),” he said.

As a result, the Mamalilikulla have appealed, with some success, to the commercial and prawn fishing sectors to voluntarily avoid the coral garden to prevent any destruction due to fishing gear dragging on the seabed.

“We're very pleased to have been able to begin this dialogue with the fisheries organizations on our IPCA, and intend to continue to take a strong leadership role in the absence of DFO, which is supposed to be responsible for marine habitat protection,” Powell said.

Chief Joseph said sacred spots in traditional territories such as the Gwa̱xdlala/Nala̱xdlala areas in Knight Inlet need the attention of their ancestral stewards.

“They’ve been lonely for a long time and need special attention,” he told Canada’s National Observer, noting he’s happy there is increasing recognition in some government agencies that Indigenous knowledge is critical to saving ecosystems.

“It’s so important, and it means that we might have a chance to save these places.”

The constant deluge of rain at the event did not deter elders in brightly-coloured rain ponchos from joining dancers in traditional regalia as they circled a crackling fire.

'Namgis First Nation Chief Don Svanvik reflected upon the mood as he started his address to the gathering.

“A little bit of rain can’t dampen the significance of this day.”

The joy and pain of language revitalization

Good news. But I'm left unclear about which level of government established the protected area. Is it a federal thing or provincial? Or both?

Rochelle Baker | Mon, 05/09/2022 - 10:52
Neither. The Mamalilikulla took action and declared the IPCA because frustrated by slow pace of government... see previous story. However, B.C. has signalled strong support for the process and work getting underway to set up framework for "land" portion of the IPCA. The main stumbling block is the marine portion, which includes coral gardens, which falls under federal jurisdication, particularly DFO.