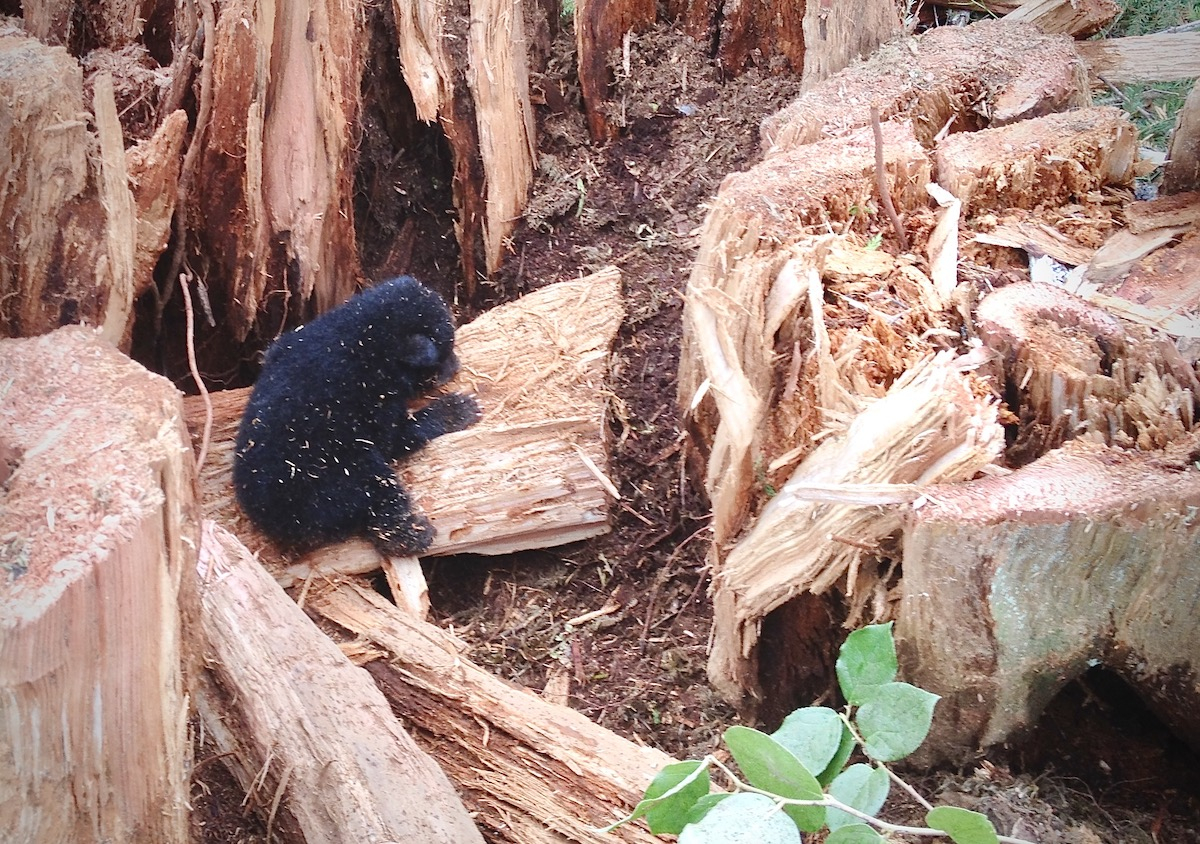 An exposed baby black bear scrabbles in the remains of its den in a stump destroyed by logging activity. Photo courtesy of Artemis Wildlife Consultants
Previous story
Next story

The photo of a baby black bear scrabbling around the woody debris of its destroyed den is certainly heart-rending, conservation biologist Tony Hamilton says.

The former large carnivore specialist with B.C.’s Environment Ministry recalls being called to attend the incident, despite it occurring almost a decade ago.

A mother and her cub were displaced from their nest in a huge, old stump that had been destroyed during logging operations in a second-growth forest on Vancouver Island near Campbell River.

The cub was initially abandoned by its mother, but the bears were tracked into the bush where it seems they reunited despite the destruction of their home, Hamilton said. But it could have been much worse.

Winter dens often double as nurseries, and if the cub had been exposed earlier in hibernation season, it likely would have died, Hamilton said.

“Any intrusion in that kind of environment is abhorrent,” he said.

The incident was unintentional, but the photo graphically depicts the need to prevent the destruction of bear dens by forestry operations in B.C., he said.

This spring, as bears emerge from hibernation and logging season revs up, conservationists, First Nations and the wilderness tourism sector are urging the province to protect bear dens to guarantee the long-term survival of the culturally iconic species.

More than a century of old-growth logging in coastal B.C. and on Vancouver Island has dramatically reduced the supply of suitable denning sites for black bears, said Mark Worthing @SierraClubBC. #ProtectBCBears #Biodiversity #WildlifeAct

More than a century of old-growth logging in coastal B.C. and on Vancouver Island has dramatically reduced the supply of suitable denning sites for black bear populations, said Mark Worthing, coastal projects lead at Sierra Club BC.

“It always fell through the cracks with these forestry regime changes,” he said.

Wildlife Act changes should be permanent and protections uniformly applied to both Crown and privately owned lands, Worthing added.

“We’re just looking to actually keep bear dens on the landscape … into the future, rather than trying to do something before it’s too late.”

Case studies for change already exist in Haida Gwaii and the Great Bear Rainforest on B.C.’s central coast where protection measures were enacted in response to First Nations’ concerns, he said.

Other First Nations on Vancouver Island are also taking measures to protect dens in their territories and want the province to step up and do the same.

A number of forestry companies have also voluntarily adopted measures to protect bear dens. BC Timber Sales, the provincial agency that controls about a fifth of the timber harvest, also has guidelines.

But in most instances, the rules are inadequate, inconsistently applied and not legally enforceable, Worthing said.

What do bears need in a nursery?

Coastal black bears need a warm, dry, safe place to shelter their young from persistent rain during their winter hibernation.

The length of the winter sleep varies with the weather, food supply and location, but it can stretch from November to May in colder locations, Hamilton said.

Unlike bears in the Interior that might excavate a den in soil, coastal black bears rely almost exclusively on hollows in large trees or woody structures — typically more than a metre wide, upright or fallen, mostly in old-growth areas, or in very large stumps left behind in mature second-growth areas.

Den chambers also vary, but average around 143 centimetres across, according to a Vancouver Island study by biologist Helen Davis, a leading champion for black bear den protection.

Bears drag in surrounding vegetation — such as salal, moss, ferns or tree debris — for bedding, and often squeeze themselves in through shockingly tiny entrances.

For example, an adult male bear, weighing 130 kilograms and just over a metre at shoulder height, can wiggle through an entrance 42 centimetres by 20 centimetres.

Den indicators include hair snagged on the edges of entrances, claw or bite marks from bears’ “remodelling” efforts, and a mix of dry foliage inside the chamber.

A sound den bear is used repeatedly and ensures the survival of multiple generations of bears, Hamilton said.

On northern Vancouver Island, 71 per cent of available dens were reused at least once, research by Davis and Hamilton suggests.

But repeat den use might be because of heavy timber harvesting driving down supply, said Hamilton, adding more effort is needed to maintain and “grow” new dens in mature second-growth forests.

As well as developing best practices for forestry operators to preserve dens, Davis is successfully experimenting with First Nations, conservation groups and industry to build new ones.

It’s important to ensure den redundancy across wide swaths of good bear territory to protect habitat and lower the risk they’ll prey on each other, Hamilton said.

“We need to be sure diversity and distribution of the species are maintained … [such as] home range structures with lots of overlap where maternal clans tolerate the presence of daughters and granddaughters.”

This will help bears weather other likely stressors — such as drought, fires and flooding — brought on by the climate crisis, he added.

Protecting dens involves identifying them in cutblocks before timber harvesting begins, using best practices to protect them over time and during subsequent logging operations, and minimizing disturbances to bears.

It’s not enough to simply protect a single tree in the middle of a denuded cutblock or a den next to a logging road, said Worthing, noting baby bears need a treed backyard to play in, with escape routes from danger.

Enacting rules to protect bears dens uniformly across B.C. is easy, “low-hanging fruit” for the province, and broadly supported by most stakeholders in the forestry sector, Worthing said.

“I haven’t met a single person who doesn’t think this is a good idea — and that includes foresters, truckers, loggers,” he said.

“No one wants to log a bear den,” he said, adding he believes most large companies would also be on board.

“I think they are ready,” he said.

“If they aren’t, they shouldn’t be welcome to operate in the province of British Columbia because it's just unethical.”

The joy and pain of language revitalization

It becomes ever more evident

It becomes ever more evident that large sectors of human society - especially those engaged in the extractive/destructive capitalitstic exploitation of the planet's riches and very fabric of this planet are incapable of living with, or sharing, this planet with anything that does not enrich themselves.

Their sole focus is ripping off those assets and more incredibly, expecting to take that stolen wealth with them when they are forced to abandon their own totally despoiled den!