By Barry Saxifrage | Analysis, Climate Solutions Reporting | May 24th 2022
#2008 of 2128 articles from the Special Report: Race to a Safer World 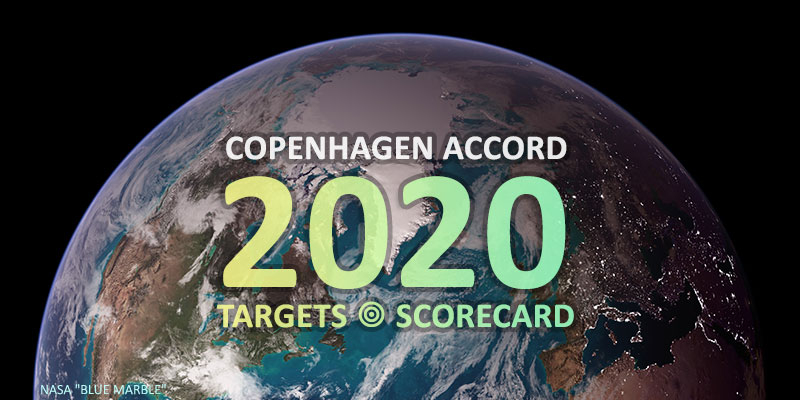 Back in 2009, the world's nations gathered in Copenhagen, Denmark, hoping to head off a full-blown climate crisis. Canada, along with all major developed nations, pledged greenhouse gas reduction targets for the then-distant year of 2020.

That year has come and gone. But the 2020 emissions data has only recently been released. So, this is our first chance to look at how well Canada and many of its peers did in meeting their international climate commitments. My first chart below focuses on Canada and the rest of its Group of Seven (G7) peers.

The chart shows Copenhagen Accord targets as coloured bull's-eyes. Each nation's actual emissions is shown by lines of a matching colour. To highlight the unusually large, and likely temporary, pandemic-driven drop in 2020, I've shown that year as a dotted line.

Let's start at the top with Canada, shown in red. The target we set for ourselves was slightly above our 1990 level, as shown by the red bull's-eye. We were so far above our target with only one year to go that even the huge pandemic drop didn't get us close.

Next highest is the Americans, in blue. They set a target lower than ours, as shown by the blue bull's-eye. By 2019, they were close enough that their pandemic drop pushed them well past it.

Japan, shown in gold, pledged a much lower Copenhagen target — at 25 per cent below 1990 levels. On the plus side, they've managed to cut emissions a bit more than the Americans since 1990. But they also fell well short of the target they set for themselves.

The rest of the G7 are shown in green. These include four European nations — the United Kingdom, Germany, France and Italy — plus the European Union as a whole. All the EU nations shared a single combined Copenhagen Accord target for 2020. That target, shown as a green bull's-eye, was 30 per cent below their 1990 level. As the chart shows, the EU was almost there in 2019. So, their pandemic drop was far more than they needed to reach it.

At the bottom of the chart are the two G7 nations that have made the deepest cuts in their emissions: the U.K. and Germany. In 2020, Germany emitted 40 per cent less than they did in 1990. Meanwhile, the U.K. has cut their emissions in half — currently emitting less per year than they did 130 years ago, in 1890.

My second chart expands the field to include the remaining 24 European Union nations as well.

Canada has had an "oversized failure" to meet our Copenhagen Accord greenhouse gas reduction commitment, writes columnist @barrysaxifrage. #ClimateAction

The chart's bars show the percentage change in emissions from 1990 to 2020. The many green bars show reductions. The few red bars, which include Canada, show increases.

Unfortunately, for our future safety, climate pollution in most nations has already rebounded from these pandemic-driven lows. Globally, the International Energy Agency recently reported that fossil fuel emissions surged to record heights in 2021.

So, it is likely emissions in Canada and most of its peers on these charts are already higher than what is shown here. In Canada, we will likely need to wait another year to find out how much our emissions rose last year. That's because our government takes a long time to publicly report.

Other nations, however, report more quickly. For example, the U.K. has already released a detailed report on their 2021 emissions. It shows that, indeed, their emissions have risen from their pandemic low of 49 per cent below 1990 levels. Last year, the U.K. emitted 47 per cent less than they did in 1990. That's the wrong direction, but I'm guessing there are a lot of Canadians that would be very happy to be in their shoes.

How has the U.K. managed to cut emissions, meet its climate targets and promptly inform its citizens of climate progress? A major reason is that their government is legally required to do all that. A year before the Copenhagen Accord, the U.K. enacted their Climate Change Act 2008, also known as the "Carbon Budget" law. This holds their government legally responsible for meeting carbon budgets that cover all emissions in all years.

In contrast, Canada's governments set distant single-year targets and then avoid taking legal responsibility for emissions in between. Our oversized failure to meet our Copenhagen Accord commitment highlights how ineffective Canada's approach has been. At any point we could, instead, adopt the U.K.'s "Carbon Budget" policy package that has worked so well for our Commonwealth peers.

Remember the above article on

Remember the above article on lobbyists? Remember several Conservative Premiers going to the Supreme Court of Canada to challenge Carbon Taxes. Listen to P squared pontificate he knows more than we public and will eliminate carbon taxes and regulations and likely anything that will help Canada reduce one of the highest per capita CO2 footprints in our world. Oh! More pipelines, more fossil fuels, more oil sands! Just what we need to make that red line graph head exponentially up.!

“In Canada, we will likely

“In Canada, we will likely need to wait another year to find out how much our emissions rose last year. That's because our government takes a long time to publicly report.”

Creative accounting takes time. It’s a lot of teamwork to figure out how and where to hide excess emissions.
And then someone has to draft suitable li[n]es and talking points for the Environment Minister so she/he can explain to the public how new pipelines and oil projects won’t add to emissions and will “fit in” with Canada’s climate plan.

“Trudeau Approves Kinder Morgan Trans Mountain Pipeline As Part of Canada’s ‘Climate Plan’” (The Narwhal, Nov. 29, 2016)
“Justin Trudeau announced the approval of the Kinder Morgan Trans Mountain pipeline Tuesday, saying the project is integral to meeting Canada’s climate commitments.
“‘Today’s decision is an integral part of our plan to uphold the Paris Agreement to reduce emissions while creating jobs and protecting the environment.’”

Jim Carr, Catherine McKenna: “Benefits and impact of Trans Mountain transcend any one province” (Edmonton Journal, 2018)
“Simply put, any natural resource development needs to demonstrate how it will fit within our national climate and clean growth plan – because meeting our climate targets is non-negotiable.”
https://edmontonjournal.com/opinion/columnists/opinion-benefits-and-impa...

Catherine McKenna: “With all projects, we take into account the emissions, and we make decisions based on science, evidence and facts, and when it comes to all projects, they also need to fit in with our climate plan—and they need to take into account those emissions.”
“5 quotes about staying the course on climate change from Canadian environment minister Catherine McKenna” (2017)
https://www.jwnenergy.com/article/2017/1/19/5-quotes-about-staying-cours...

“Everything we do has to be consistent,” McKenna told The West Block‘s Vassy Kapelos. “It’s really (that) a project has to overall fit within our climate plan. Let’s take Alberta, Alberta’s a great example … We know that projects in the oil sands have to fit in that hard cap, so that’s good.” (2018)
https://globalnews.ca/news/4016425/catherine-mckenna-pipeline-approval-a...

Sandy Garossino: "There's an extraordinarily compelling case to be made for Trudeau's climate plan, and how the TMX pipeline fits into the bigger picture."
“The serious $70 BILLION climate plan you’ve heard nothing about” (National Observer, 2019)
https://www.nationalobserver.com/2019/06/21/opinion/serious-70-billion-c...

Assurances as hollow as a pipeline.
With its plan to fail on climate, Canada is right on schedule. No change in course required.