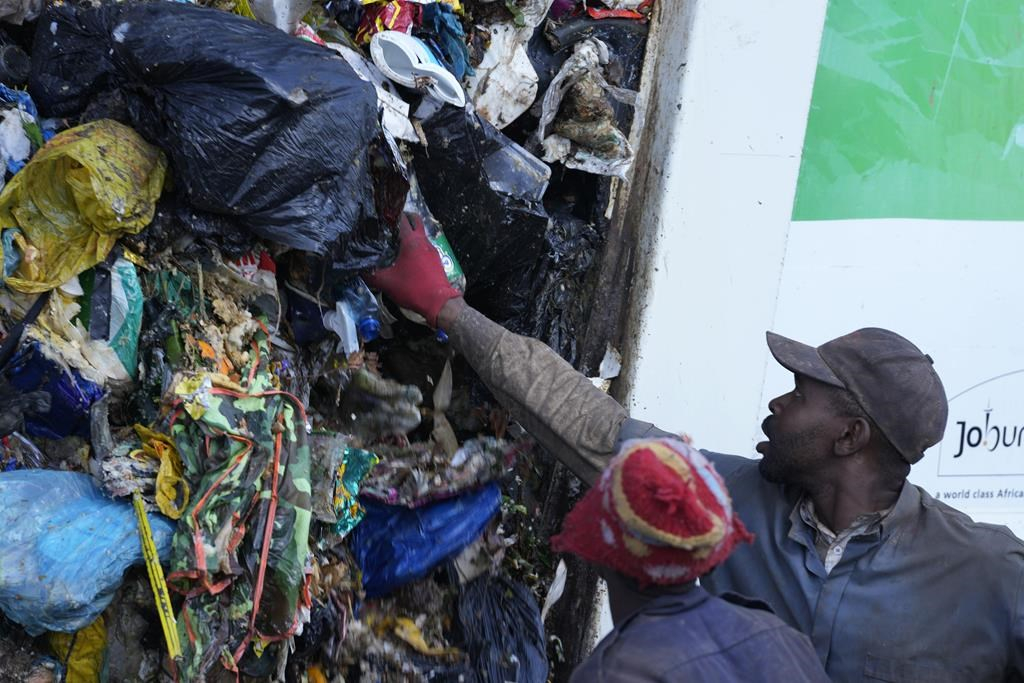 Waste pickers rummage through garbage, at a dumping site in Johannesburg, South Africa, on Friday, May 20, 2022. (AP Photo/Themba Hadebe)
Previous story
Next story

Environmental activists are meeting in South Africa this week to press governments and businesses to reduce the production of plastic because it is harming the continent’s environment.

The conference, “Towards Zero Plastics to the Seas of Africa,” being held in Gqeberha (formerly Port Elizabeth), South Africa, through Friday brings together academics and experts on the plastics industry and its effects on the continent, say organizers.

The participants are focusing on the actions needed to stop plastics from ruining Africa’s land and seas, say the organizers, the African Marine Waste Network. The conference follows the United Nations Environmental Assembly’s resolution for the development of a legally binding treaty on plastic waste by 2024.

Despite a growing recycling industry, plastic waste is piling up in Africa’s landfill sites, clogging stormwater drainage systems and polluting rivers and oceans.

Africa has an average waste collection rate of 55% but only 4% of it is recycled, according to a report by the U.N. and the Center for Scientific and Industrial Research in South Africa.

This is way below the African Union’s target for the continent’s cities to recycle at least 50% of their waste by next year.

In Johannesburg — South Africa’s most populous city with more than 6 million people — the landfill sites are fast reaching capacity. The municipality collects up to 40,000 tons of general waste including plastic every month, according to its waste management agency Pikitup.

“Plastic is not biodegradable ... so it lives for a very long time. It eats up our landfill space and is very difficult to compact,” said Pikitup spokesman Muzi Mkhwanazi.

In 2018 the city made it mandatory for residents to separate plastic from other waste, but not many are practicing that.

Johannesburg’s biggest landfill site in Turffontein is a hive of activity as waste trucks drop off garbage and waste pickers spread themselves across the area to pluck out plastics, cardboard, bottles and wood that can be sold to recyclers. The rest is crushed and then covered by new deliveries of waste.

Thousands of freelance waste pickers work on the streets of the sprawling metropolis as well as at the landfill site. They sort various types of garbage into what they can sell to recyclers in order to eke out a living. Others have paid employment at recycling centers.

Agnes Hlungwani says she has been supporting her family by sorting plastic waste at the Whole Earth Recycling plant. When her husband died in 2006 sorting waste was one of the only types of work she could get, she said.

“I sent my children to school and I have supported myself. My husband is no longer around, but the children are grown up now, all because of this job,” said Hlungwani.

Waste campaigner Musa Chamane told The Associated Press that the conference is necessary to press decision−makers in businesses, governments and municipalities to reduce plastic waste.

“Although there is sorting that takes place at the landfill, it is not ideal as it is mixed with food waste, medical waste and that’s not hygienic,” she said. “If we can stop using non−recyclable plastics in our packaging material and encourage more people to start recycling we will have a better rate of recycling.”