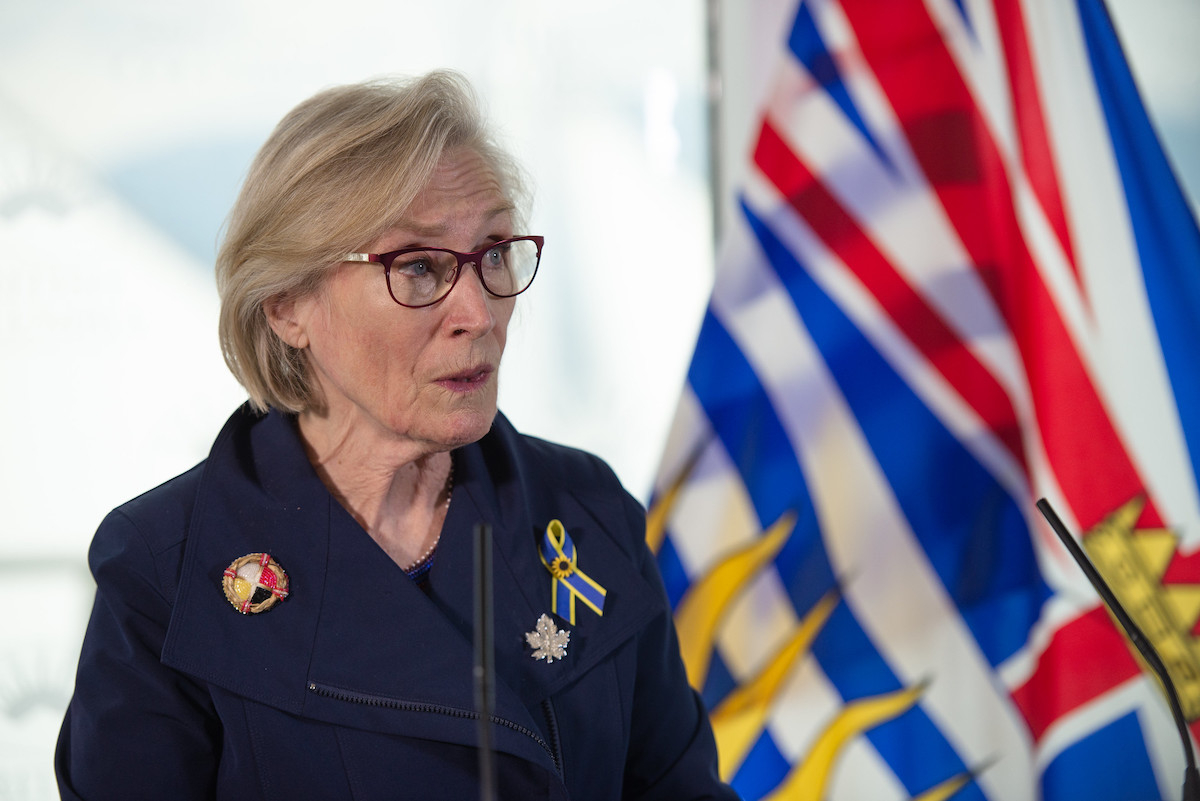 Response to Ottawa’s historic announcement that it will decriminalize the personal possession of small amounts of illegal drugs in British Columbia ran the gamut Tuesday.

While some expressed relief at the move, which aims to help tackle the toxic drug crisis, others criticized the plan as patchwork and irresponsible.

“I’m heartened to see some actual movement on this issue,” said peer advocate and broadcaster Garth Mullins, noting he and other people who use drugs have been fighting for decriminalization for more than two decades.

“I thought it would never come,” Mullins said.

The federal government's decision will allow adults in B.C. to possess up to 2.5 grams of illegal drugs such as opioids, cocaine, methamphetamine and ecstasy as of Jan. 31, 2023.

But the province’s three-year exemption to federal drug laws is bittersweet because the amount of drugs people can carry before they are seized or individuals face criminal penalties is far too low, he said.

B.C. had asked Ottawa for a possession threshold of 4.5 grams, an amount drug users had already suggested was inadequate.

“This amount doesn’t really decriminalize everybody,” Mullins said. “People with the biggest habits who are the most vulnerable to criminalization get left out.”

It also illustrates that the federal government continues to make drug policy decisions unilaterally, without input from the very drug users who forced decriminalization onto the table for discussion in the first place, he said.

“Really, it’s a place to start. We’ll just have to keep the fight going,” he said.

The announcement was a somewhat hollow victory, said Leslie McBain, one of the founders of Moms Stop the Harm (MSTH), a nationwide group representing thousands of mothers and relatives who have lost loved ones to toxic street drugs.

Not only are the possession thresholds too low to prevent harms to people who use drugs frequently, but the federal announcement fails to address the urgent need for regulated, easily accessible alternatives to poisoned street drugs, McBain said.

Acting immediately to establish safer supply is the quickest way to curb the death toll in a national public health crisis that has killed nearly 30,000 people over the last six years, she said.

The failure to do this is largely the result of political cowardice, she said.

“We know all these deaths are preventable, yet governments are dithering around because of different politically motivated reasons,” McBain said.

Decriminalization does not legalize illegal drugs

“Let me be clear,” Malcolmson said. “Drug trafficking remains illegal, and decriminalization will support enforcement efforts to focus on organized crime and drug traffickers instead of on individual users.”

Over the trial period, data stemming from B.C.’s exemption, the first in Canada, will be analyzed and may result in adaptations, including adjustments to possession thresholds or even the complete shutdown of the pilot initiative. 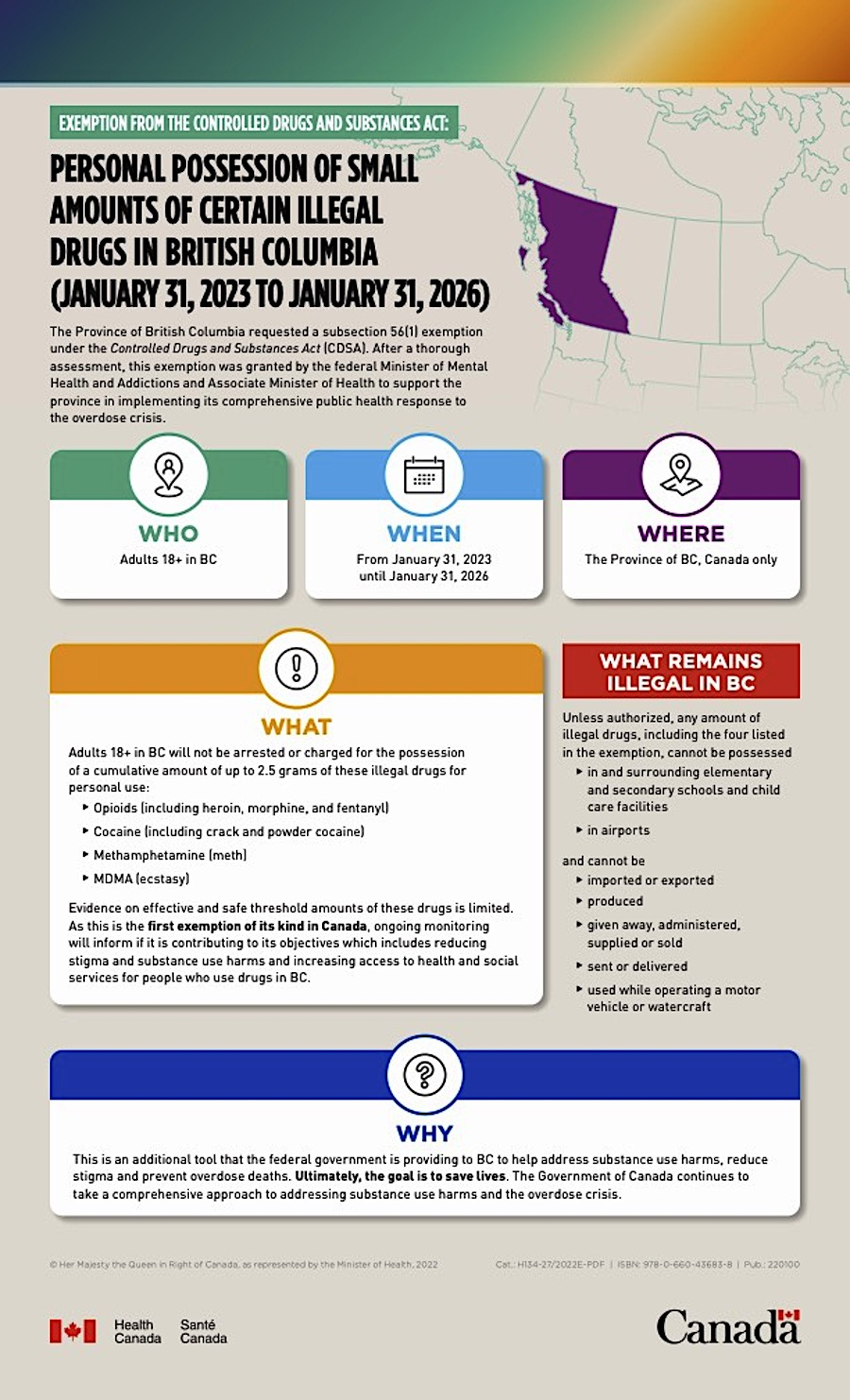 B.C. will be a case study for granting exemptions elsewhere in Canada, Bennett said.

“Building the evidence for this exemption from (the federal drug act) is going to be really important, I think, for the rest of the country,” Bennett said.

Both ministers said decriminalization was one of a range of responses, such as treatment, harm reduction and the housing and health supports necessary to tackle the public health crisis.

Since 2017, the federal Liberal government has allocated more than $800 million to a number of measures to tackle the toxic drug crisis, said Bennett, announcing an additional $11.78 million of Health Canada funding for 14 substance use and addictions projects in B.C.

While both ministers acknowledged safer supply was vital to saving lives, neither outlined any concrete steps or timelines to expand safer supply provincially or federally.

Decreasing the stigma, shame and fear of criminal prosecution associated with drug use means people will be more likely to access the health and social support they need to stay safe, said B.C. Provincial Health Officer Dr. Bonnie Henry, a longtime advocate of decriminalization.

Vancouver Mayor Kennedy Stewart said he was emotional hearing about the provincial exemption, given it also covered the city’s decriminalization request to the federal government.

“I can tell you, I felt like crying and I still feel like it,” Stewart said, adding the provincial exemption marks a bold, new approach to tackling the poisoned drug crisis.

“Decriminalizing the simple possession of drugs is an historic, brave and groundbreaking first step in the fight to save lives,” Stewart said. “It marks a fundamental rethinking of drug policy that favours health care over handcuffs.”

However, Gord Johns, federal NDP critic for mental health and harm reduction, said the Liberal approach to the poison drug crisis is patchwork and irresponsible.

‘It’s cynical (the federal government) is announcing this the day before the vote on Bill C-216,” Johns told Canada’s National Observer, adding the poisoned drug supply doesn’t end at the B.C. border.

“The harms of criminalization will continue in every other province and territory,” said Johns, MP for Courtenay-Alberni.

“Incrementalism kills when it comes to this issue, and it's not the way to respond to a national crisis.”

McBain is also suspicious about the timing of the federal announcement. It may cloud the importance and need for Bill C-216 to address the toxic drug crisis in a more fulsome way, she said.

MSTH and other advocacy groups fighting for better drug policy worked hard to increase awareness on the importance of the bill with both the public and MPs.

“I’m hopeful the bill will still be supported by politicians,” Bains said, adding B.C. may be on the forefront of progressive measures to deal with the toxic drug crisis, but greater government responses are still urgent and necessary.

“We are going to lose five to seven people today (in B.C.) from drug harms,” she said. “That means five to seven families arranging funerals and being in grief for the rest of their lives.”