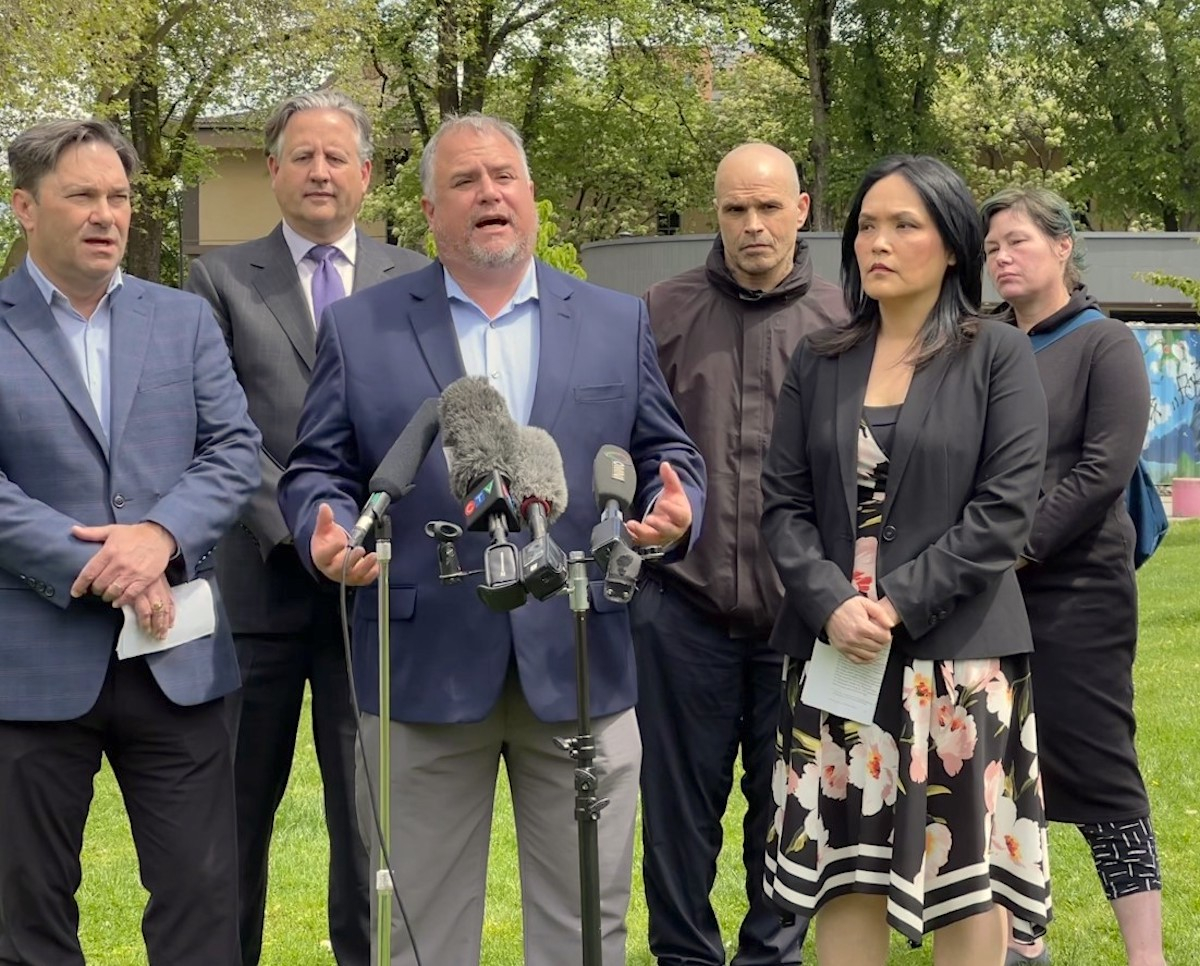 A concerted push is shaping up to get the federal government to back a bill that would decriminalize the simple possession of drugs and shape a national strategy that includes regulated safe alternatives to poisoned street drugs.

Vancouver Mayor Kennedy Stewart and a number of Lower Mainland MPs joined federal NDP mental health and harm reduction critic Gord Johns on Friday after he met with local groups advocating for better policies to save lives and reduce the stigma experienced by people who use drugs.

More than 27,000 Canadians have died as a result of toxic street drugs since 2016, with approximately 20 people dying on a daily basis last year.

The Liberal government is failing to listen to its own experts, said Johns, who’s been touring the country to garner support to move his private member's bill forward for consideration by the Standing Committee on Health on June 1.

“We know criminalizing those who use substances is killing people and causing more harms,” Johns told Canada’s National Observer, accusing the Liberals of inaction and lack of will to devise any comprehensive policy while the public health emergency worsens over time.

“Clearly, the stigma starts with the prime minister,” Johns said.

“[Justin Trudeau] only chooses to listen to experts in science when it suits his political purposes.”

Advocacy groups, provincial and public health officials and the Canadian Association of Chiefs of Police have long urged Ottawa to make changes to divert people from the criminal justice system and increase access to health and treatment services.

The federal government has stated it’s not open to decriminalizing drug possession but intends to focus on a health and educational approach.

"Clearly, the stigma starts with the prime minister," says NDP critic Gord Johns, the sponsor of the proposed bill, on the federal Liberals' resistance to decriminalizing the personal possession of small amounts of drugs. #ToxicDrugCrisis #Canada

Advocacy groups such as the HIV Legal Network and Moms Stop the Harm, a network of thousands of moms and relatives who have lost loved ones to poisoned street drugs, are throwing their support behind the proposed legislation.

On May 31st I will be traveling to Ottawa with a group of warrior moms in support of Bill C-216. The vote to move this bill to committee stage is on June 1st, 2022 and we want to be when it passes.https://t.co/y6iTPl6YVN#4Ryan#MSTH#billc216#cdnpoli#toxicdrugcrisis

While Vancouver, Toronto and B.C. have already applied to the federal government for exemptions to the Controlled Drugs and Substances Act to allow people to carry small amounts of illicit drugs such as cocaine, heroin or fentanyl, these requests have also been left to “gather dust,” Johns said.

Vancouver’s mayor said he was proud to support the bill, adding the criminalization has had negative impacts on the health and well-being of far too many people across Canada.

“It unfairly targets those who are homeless, experiencing mental health issues, and racialized and Indigenous communities,” Stewart said.

“This bill is a chance to take a more compassionate approach — ensuring drug users end up in health care, not handcuffs.”

No community on Vancouver Island, or across Canada, has been spared during the toxic drug crisis, said Johns, MP for Courtenay-Alberni, adding 327 people died across the Island Health region last year.

Virtually everyone has experienced the loss of a family member, friend, neighbour or community member due to the poisoned drug supply, he said.

“I’ve known six of those people personally,” he said.

“If we measure our country by how we treat our most vulnerable, we're failing miserably.

“This is a federal issue and the federal government needs to step in and act.”

Cities looking to decriminalize drugs to save lives

I appear to be blind for I do

I appear to be blind for I do not see how decriminalizing street drug possession and clearing criminal records will save lives?
As for funding, is it not a provincial healthcare issue? and federally taxing the cost of this across the country is some what unfair.
I am sorry for those that are addicted but it is not my fault and I do not feel I should incur the cost.
Sorry if I sound uncaring but do we have a alcohol, gambling, program for other addictions?

Decriminalizing possession means reducing or eliminating stigma and discrimination against users. Which means they're more likely, and able, to access health care services.

It also reduces the opportunity for criminals who market street drugs to "step on" them--the old saying in my work was "there is no quality control on the street". Almost NO street drugs are purely and solely what they're marketed as. Everything else is, at best, benign, and at worst highly toxic, and often fatal.

Clearing criminal records provides an opportunity for people to enter health care, education, employment, and other spheres of "normal" life.

Yes it's a provincial issue, but the feds transfer $ to the provinces all the time, to address specific needs.

It's not confined to one geographic area or another--it's already spread across the country, and we are all already bearing the costs--ill health, lack of access to employment, sometimes criminal involvement for funds, heightened demand for ER and other hospital services, increased costs for social service, the fall-out from lack of education....

You're already footing the bill, as am I. I prefer to spend my tax dollars more wisely.

And yes, in many provinces, we have programs for alcohol misuse, and gambling, and other addictions.

You're not blind, just uninformed. I worked in the field, at the system and structure level, for over 20 years.

Go to ccsa.ca--it's a federal resource, and chock-full of information--expert information.

Thank you for your words of

Thank you for your words of wisdom earned through experience, Kathy.

So, imagine you're addicted