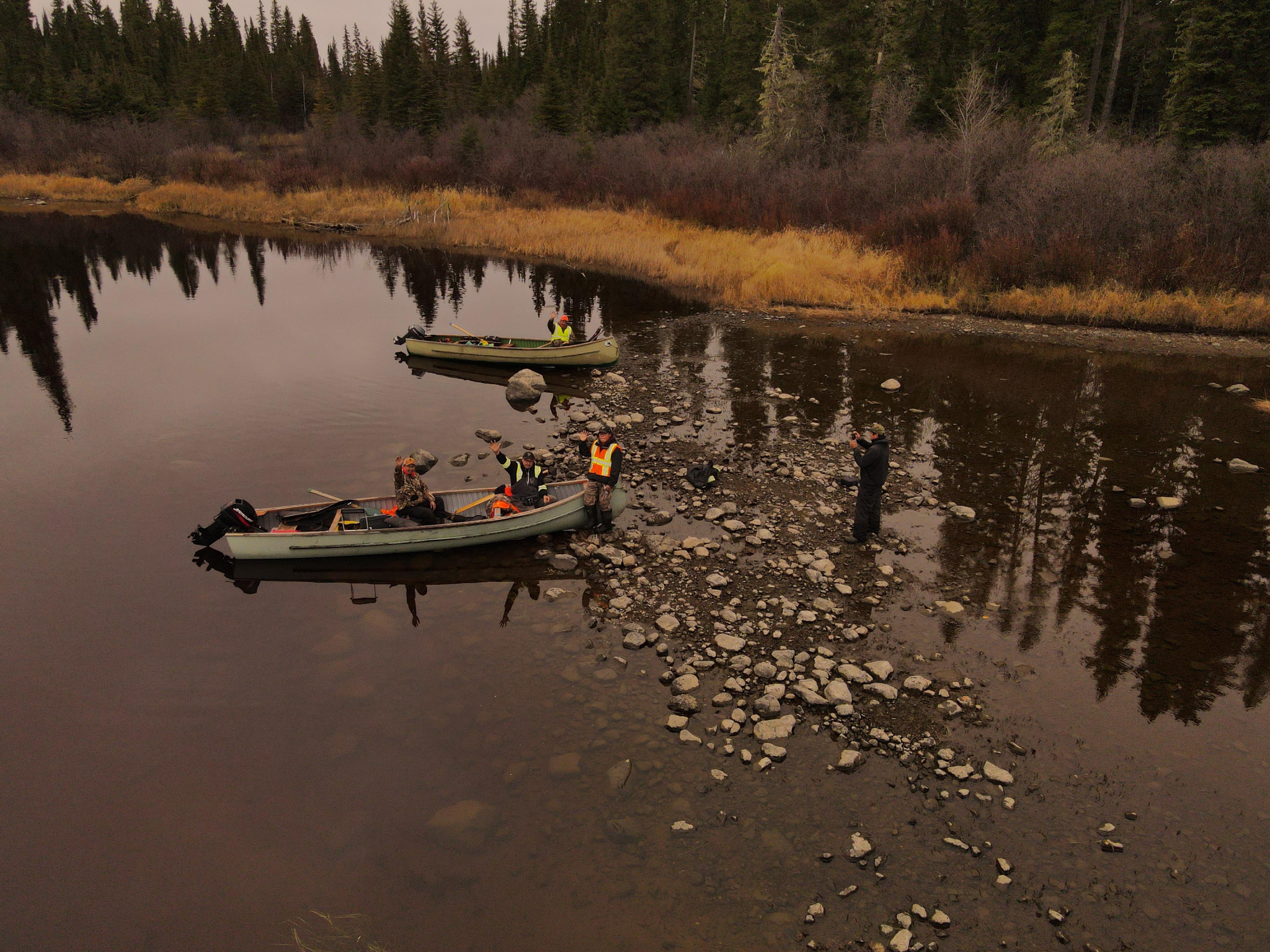 Neskantaga First Nation Chief Wayne Moonias, seen at the far end of the boat, says his nation hasn't given consent to any of the parties' plans for the Ring of Fire. Photo submitted
Previous story

As election day looms in Ontario, Progressive Conservative Leader Doug Ford continues to tout his plan to develop the Ring of Fire, a mineral deposit the PCs say is vital for the future of electric vehicles. However, some Indigenous nations in the area say the plan’s consequences have not been adequately considered and the government hasn’t consulted them.

The Ring of Fire, about 500 kilometres northeast of Thunder Bay, is home to a 5,000-square-kilometre mineral deposit. The province’s plans include a $1-billion investment to build roads to access those deposits, as much of the remote area is now accessible only by plane, but the project has been up in the air for years. Last week, The Narwhal reported the $1-billion investment the province has asked the feds for is far from being secured.

A number of Indigenous communities are nestled in the area, with varying opinions on the mining proposition. Neskantaga First Nation sits on the Attawapiskat River, downstream from the would-be Ring of Fire. Chief Wayne Moonias said the project would impact his community “forever” and that he doesn’t think the environmental assessment process now underway is sufficient.

“The consultation is not adequate enough (for) the decisions that need to be made. We have not provided our consent to any of the plans that the campaign or the government or the people in the media are talking about,” he said.

“So it's very troubling when the premier and the proponents and the industry say that they want to access our traditional homelands.”

Much of the Ring of Fire is in the Mushkegowuk-James Bay riding, which is 27 per cent Indigenous and 60 per cent francophone. The riding is currently held by the NDP’s Guy Bourgouin, who won with 4,827 votes, or 51.77 per cent, in 2018. The Progressive Conservatives were behind at 2,795 votes, or 29.98 per cent.

Neskantaga First Nation is in the Kiiwetinoong riding, created in 2017. The area saw a close race in 2018 when NDP MPP Sol Mamakwa beat his Progressive Conservative competitor by only 1,467 votes. There are 32,987 residents in the riding, 68 per cent of whom are Indigenous, making it an area where votes from First Nations affected by the Ring of Fire matter.

The chiefs of Marten Falls and Webequie First Nations announced last month they would outline how they plan to work together with the province to move the Ring of Fire project forward. The nations also signed a memorandum of understanding with the provincial government in March 2020. Both First Nations were contacted by Canada’s National Observer but did not respond in time for publication.

“... Needless to say, the environment has no price tag, therefore development will proceed only if the environmental assessment process is thorough and with the full participation of Marten Falls First Nation,” said former chief Eli Moonias in a press release.

However, Attawapiskat, Fort Albany and Neskantaga First Nations have declared a moratorium on development in the area. Neskantaga Chief Wayne Moonias said the push to develop the Ring of Fire is all the more concerning because of the government’s inaction on the boil-water advisory his community has been under for 27 years. He also points to the high rates of suicide and poverty, and recent flooding in the area.

Neskantaga First Nation Chief Wayne Moonias said a lack of support for northern Ontario First Nations communities, along with a sub-par plan to develop the Ring of Fire, spans across all the election platforms he has seen. #OnElxn

“Those are issues that are really happening in our communities … all you hear about is how they want access, they want to open the minerals,” he said.

“... (They) want to open up the north without even considering the other issues that are being faced by people — by our elders, by our children, by our mothers.”

Moonias said the lack of support for northern Ontario First Nations communities, along with a sub-par plan to develop the Ring of Fire, spans across all the election platforms he has seen.

Here’s what the four main parties have to say about the Ring of Fire ...

On May 7, Ford put out a press release reaffirming his commitment to the project, while putting down the previous Liberal government (which was in power between 2003 and 2018) for not following through on its commitments to get the mining projects off the ground.

“Only the Ontario PCs have been able to work alongside Indigenous partners to break the log-jam and take important steps forward in getting an all-season road built to the Ring of Fire,” said Ford.

“For 15 years, the Liberals were all talk but no action. (NDP Leader) Andrea Horwath and (Liberal Leader) Steven Del Duca will find any reason to say no to building a road to the Ring of Fire with endless studies, reports and committees.”

Meanwhile, in the NDP’s platform, the party puts down Ford’s government for inaction around the Ring of Fire since coming into power in 2018. Like the PCs, they say they’ll get the project going.

“Because of Ford’s inaction, the project is further away than ever. The Ontario NDP knows that the key to building a responsible, sustainable future for resource development in Ontario is consulting and working alongside First Nations, mining and exploration companies, refiners and northerners,” reads the platform.

“Developing the Ring of Fire is a tremendous opportunity if we get it right, and that means enacting our duty to consult with First Nations and engaging in sound environmental management. We are committed to doing so, and will move forward clearly and transparently with all stakeholders and First Nations.”

The Ontario Liberals’ platform also contains a clear promise to develop the Ring of Fire.

“We’ll also ensure the Ring of Fire is developed in a sustainable, inclusive and environmentally conscious way — fully funding road access, facilitating the connection of First Nations communities to the provincial power grid and entering into revenue sharing agreements with Indigenous communities,” says the party.

Canada's National Observer reached out to the Ontario Green Party after leader Mike Schreiner said his government would work with Indigenous nations to mine minerals in the north in a sustainable way at a CBC leadership debate.

The Greens pointed to their plan for the north, which says they will “increase sustainable, circular and Indigenous-led access to critical minerals and metals while fully adhering to principles of UNDRIP” and “develop the Ring of Fire in partnership with Indigenous communities, respecting Indigenous sovereignty and equity ownership, resource sharing with Indigenous communities and local municipalities, while utilizing sustainable mining practices to minimize environmental harm.”

It IS possible to do projects

It IS possible to do projects like this and "get it right", but OMG you have to ride herd on the mining companies with a microscope and a whip. Canadian mining companies get away with literal murder in most parts of the world, and that sick culture comes home.

I sure hope Sol Mamakwa is

I sure hope Sol Mamakwa is reelected and becomes the next leader of the ONT NDP.

now that would be something!!! he has the dignity, gravitas, and eloquence that would stop doug cold.

I agree with the above comment. accountable oversight, huge fines for non compliance, and the lowlands value as a carbon sink, as the lungs of the earth MUST be in the calculations of what and how mining happens. Ive heard scientists say, maybe get the minerals in less sensitive and valuable places??