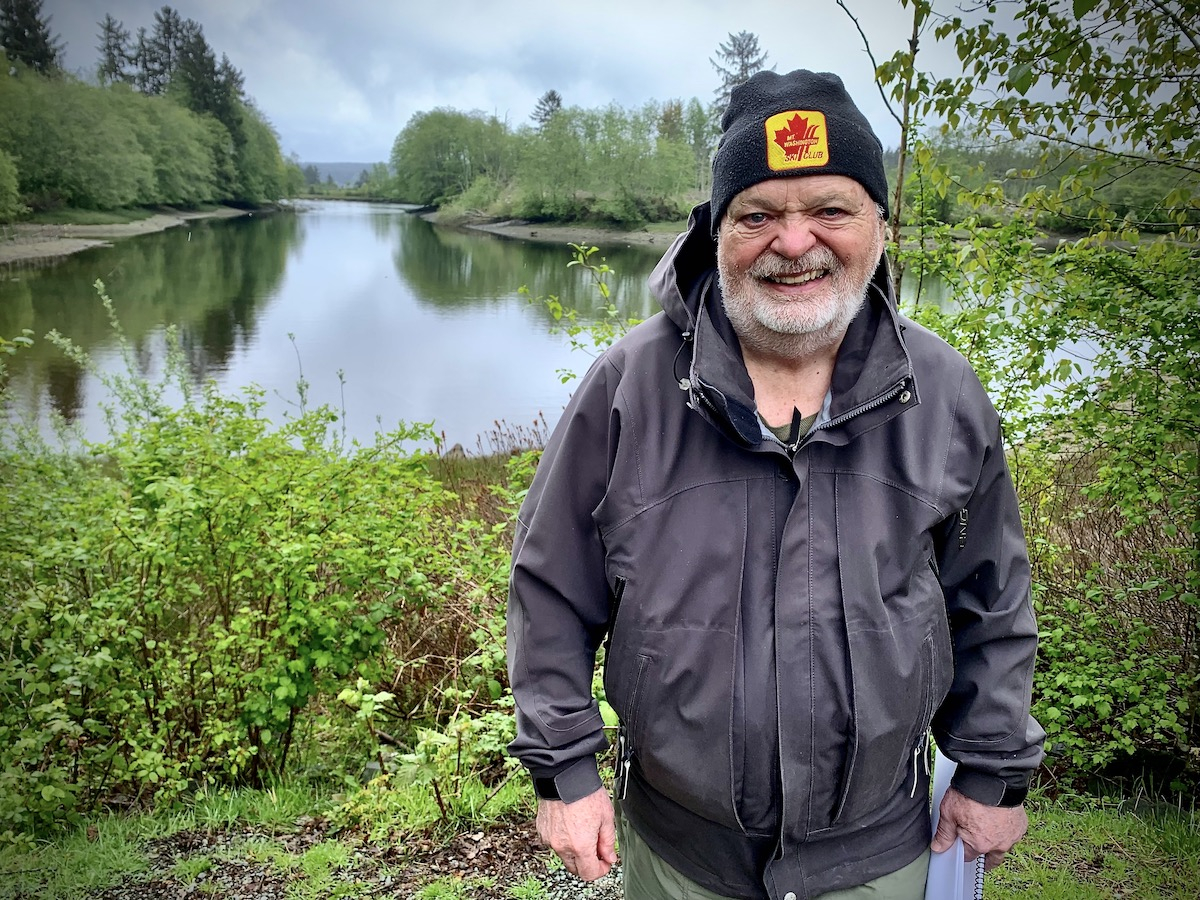 Jim Van Tine stands near Mill Pond, once the site of an industrial wasteland, in the now restored Campbell River estuary. Photo by Rochelle Baker
Previous story
Next story

Jim Van Tine points out a grassy marsh bench sloping into a tranquil pond populated by ducks and ringed by a mix of salmonberry shrubs and alder and cottonwood trees at the heart of the Campbell River estuary.

The site — Mill Pond in the Baikie Island Reserve — was an industrial wasteland little more than 20 years ago, stuffed full of log booms and surrounded by timber yards, Van Tine said.

“It was completely sterile,” said Van Tine, one of the founding architects of the estuary’s revitalization plan that has transformed the area over the last couple of decades.

Sensitive riparian habitat — the zone of vegetation along wetlands, streams and rivers so vital to fish and wildlife — were either buried or dredged to meet the needs of lumber mills or other industries that dominated the estuary for most of the 20th century.

Small channels were excavated into large sloughs so that huge log booms could be pushed up sensitive waterways to be closer to mills or stored in the purpose-built pond.

Tonnes of rock and gravel were dumped on wetlands to create work sites and lumber yards, said the retired hatchery manager for Fisheries and Oceans Canada.

“They drove machines right into the water, where they boomed the logs, took them out [and] put them back,” he said.

“We had a fisheries scientist here and we looked through the area and we couldn't find one remnant of what might make food for fish.”

Little more than 20 years ago, the Campbell River estuary was an industrial wasteland. Its restoration and transformation illustrate what can be achieved as governments and conservation groups undertake a massive push to save critical ecosystems.

But a downturn in the forestry sector and the resulting bankruptcy of the mill created an opportunity for the Vancouver Island city known as the Salmon Capital of the World to reclaim the prime fish habitat.

In 1999, the city teamed up with the Nature Conservancy Canada and the Tula Foundation to purchase Baikie Island and begin an ongoing remediation effort that has become a showcase for estuary restoration.

After an extensive survey and planning process, much of it facilitated by Van Tine working as the project’s lead, crews began the long process of ripping up concrete and uncovering a century’s worth of gravel, rock and wood debris.

More than 38,000 cubic metres of fill was shifted or trucked in the first phase to rebuild and plant the shoreline and make shallower waterways and back channels to create habitat for all five species of salmon and steelhead and cutthroat trout that use the estuary at various points in their life cycles.

Subsequent land purchases and years of work with extensive community support followed before the nature preserve was officially opened in 2012.

Transforming the estuary meant tackling one project at a time, grunt work involving a lot of digging and planting, and the stamina to withstand innumerable bureaucratic obstacles, Van Tine said.

“It took three years to plan one project and less than three months to do,” he said.

With the drastic declines of wild salmon stocks tied to the advancing climate crisis, the federal and provincial governments, in partnership with First Nations and conservation organizations, are undertaking massive efforts to restore salmon habitat and estuaries across the West Coast.

A meeting point where salt and freshwater mix and intersect with the land, estuaries are nutrient-rich, bioproductive ecosystems that act as fish nurseries and migratory bird pit stops.

They also perform a lot of valuable ecosystem services, like filtering water, trapping carbon and stabilizing shorelines. Already degraded by development and industry, coastal estuaries are increasingly vulnerable to climate change due to rising seas, changes in rainfall and river levels, along with ocean acidification and water temperature changes.

In an effort to mitigate the risks, Ottawa and B.C. have allocated a combined $234 million over five years to protect and restore fish habitat, much of it in estuaries, which represent only three per cent of the coastline but are critical to a wide variety aquatic and terrestrial animals and 80 per cent of all water birds.

The K’ómoks First Nation recently secured $1.4 million to restore the estuary for the Puntledge and the Tsolum rivers in the heart of their traditional territory on Vancouver Island.

Similar to Campbell River, the nation is looking to revert an abandoned industrial sawmill site back to its origins as a key salmon migration corridor.

While the restoration of the Campbell River estuary exemplifies how much can be achieved in a relatively short time, each project requires a unique plan and approach, Van Tine said.

“There are some similarities, but there’s no cookie-cutter approach to estuaries,” he said.

Along with the return of fish and wildlife to the estuary, the nature reserve is a treasured recreational hub for kayakers, dog walkers and bird watchers, he said.

Recovering an ecosystem is a never-ending project, said Van Tine, adding he has aged out of the pick and shovel work.

Much of the maintenance or improvements of the estuary are co-ordinated by the Greenways Land Trust, he said.

The charitable conservation group commands a squadron of volunteers to battle the continual onslaught of invasive plants while also planting native species, banding Canada geese, installing bird and bat boxes and mapping endangered plants such as the deltoid balsamroot.

“Our workforce is largely made up of school-aged children,” joked Greenways executive director Cynthia Bendickson.

Student groups and youth organizations involved in environmental education programs bring a lot of energy and enthusiasm to pulling or hacking away at invasives such as Scotch broom, Himalayan blackberry, yellow flag iris and purple loosestrife.

The original impetus for restoring the estuary was to create salmon habitat, but there’s been a gradual shift to a whole ecosystem approach to create habitat for many different species to improve biodiversity, Bendickson said.

“The work around invasive species is oftentimes not sexy conservation,” she said.

“But it's definitely … where I think we as an organization really can have a huge impact because we have that community involvement.”

“Without all the work we’ve done, the estuary would look different than it does now and be much poorer for all kinds of wildlife,” she added.

But the overabundance of some animals can be problematic, Bendickson said.

Canada geese, which now reside year-round on the estuary and are notorious for their appetite and pooping abilities, can completely devour sedge grasses on marsh banks leading to their erosion, she said.

In response, the Wei Wai Kum Nation watchmen and the Guardians of the Mid-Island Estuaries Society are replanting the grasses and erecting woven sapling fences on marsh flats.

The structures ward off the geese because they obstruct landings and takeoffs, Bendickson said.

Beside geese, another challenge to preserving the estuary is the constant search for funding.

While a lot of senior government money is currently coming down the pipeline to begin estuary work, there doesn’t seem to be much available to sustain restoration long term, Bendickson said.

Constantly trying to find lump sums for big projects or even funding for maintenance work in the reserve beyond what the city provides makes it hard for the charity to commit to planned projects over extended time frames, she said.

“I think having ongoing sustained funding over longer periods of time is what these ecosystems need,” Bendickson said.

“Restoring the Campbell River estuary is not a three-year project.”

The work that has been done

The work that has been done to the estuary is absolutely amazing.