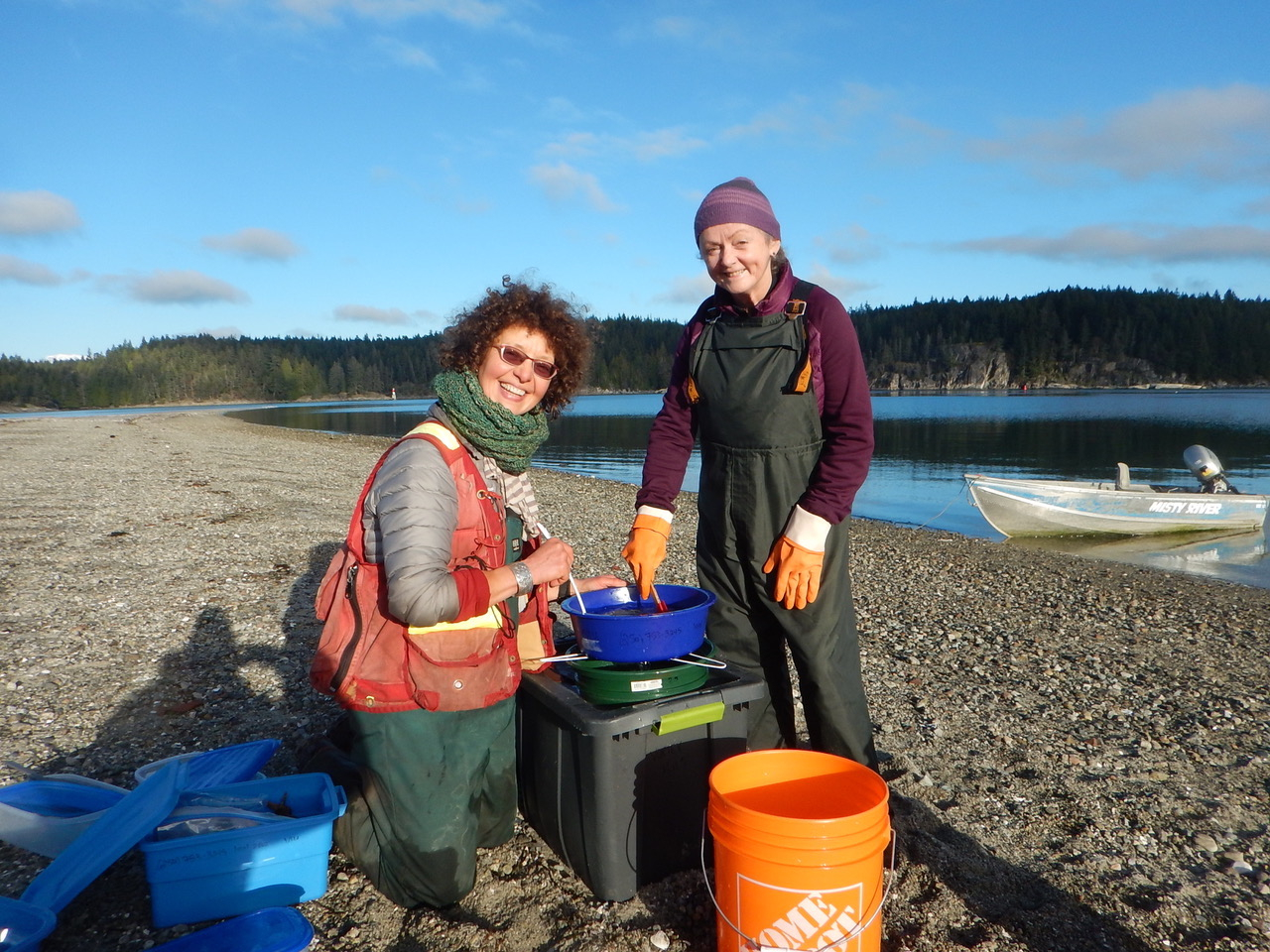 Sabina Leader Mense and Arlene Tompkins do sampling at the shoreline of Shark Spit near Cortes Island in 2019 for the forage fish mapping network project. Photo by Dennis Mense
Previous story
Next story

Should you find yourself walking any West Coast beaches this winter, take a moment to send loving vibes to the tiny — but mighty important — little fishes that may be underfoot, a Cortes Island marine biologist recommends.

It’s peak spawning season for the Pacific sand lance, one of the crucial forage fish species being mapped as part of an extensive citizen science project along the east coast of Vancouver Island, says Sabina Leader Mense, the marine stewardship co-ordinator for the Friends of Cortes Island Society (FOCI).

Right now, the microscopic fishes are busting from their eggs like popcorn along the shore of the island’s hot spots at Smelt Bay and Mansons Landing, Mense said.

The spawning window for the sand lance generally falls between the first week of November and the first week of February. But curiously on Cortes, peak spawning seems to occur a couple of weeks earlier than spawning at other locations along the shores of east Vancouver Island, she said.

Female Pacific sand lance, commonly known as needlefish, time their egg-laying on the island’s sandy shores with the highest tides on the biggest moons in early November.

“You can head down to the beach and actually see large schools of Pacific sand lance swimming just offshore to spawn on these very, very high winter tides,” Mense said.

“It’s very exciting to see them.”

The slender silver females, measuring up to 20 centimetres long, literally swim though the sand to deposit their eggs while schools of males release sperm into the waters above, she said

The fertilized eggs — invisible to the eye and measuring a mere 0.6 to 0.8 millimetres in size — are sticky and glue themselves to grains of sand, which act as a ballast to hold eggs down in their shoreline hatchery, Mense added.

“We can only cover so much area. Involving citizen scientists really allows us to expand and collect more data,” says Haley Tomlin of the Mount Arrowsmith Biosphere Research Institute at Vancouver Island University. #fish #spawning #conservation

Eggs hatch a month later as free-floating larvae living in coastal bays and estuaries until they form schools of tiny fish when they reach about 2.5 cm in size.

During spawning season, FOCI volunteers do field work, taking sand samples from beaches and filtering it down to get information on egg occurrence, abundance and development, Mense said. The data is then forwarded to Project Watershed, an environmental stewardship organization in Courtenay, which co-ordinates the citizen science teams for the forage fish-mapping network in northern Vancouver Island.

The Pacific sand lance (Ammodytes personatus) and surf smelt (Hypomesus pretiosus), which use upper intertidal sand and pebble habitat for spawning, are the focus of the network’s efforts, she said.

Few people know much about forage fish or why they are so important, Tomlin added. But forage fish are a fundamental cornerstone for the marine food web, she said.

Salmon, particularly endangered chinook salmon, and marine mammals like humpback and killer whales, seals and sea lions all prey on the small fish. A range of birds, such as herons, eagles and the endangered marbled murrelet, also depend on forage fishes.

“They are just a great source for a ton of different commercially and ecologically important species,” Tomlin said.

“It's important to keep the species going, and they need spawning habitat to keep reproducing.”

There’s a real gap in knowledge about exactly where and when the fish spawn along B.C. shores, she said.

However, all the data being collected by the forage fish network is being submitted to the Pacific Salmon Foundation’s Strait of Georgia Data Centre.

“They have, and organize, an open access database,” she said.

“It’s great because then everybody can access all the information (for research).”

Another objective in mapping spawning grounds and documenting when they are used by the fish will help establish policy for protecting the beaches from development or other disturbances during critical windows of time, she said.

The role of citizen scientists and volunteers on the project is critical for both increasing community awareness of the importance of forage fish and by extending the geographical reach of the study, Tomlin said.

MABRRI has, at most, four staffers to cover a region that stretches from Cowichan Bay north to Deep Bay, and includes a few of the Gulf Islands.

“We can only cover so much area,” Tomlin said. “Involving citizen scientists really allows us to expand and collect more data.”

The volunteers are also key for increasing awareness around forage fish.

“Citizen scientists spread the word about the importance of the species,” Tomlin said.

“They are helping collect the samples and are going home to tell their partners, friends and family what they’re finding.”