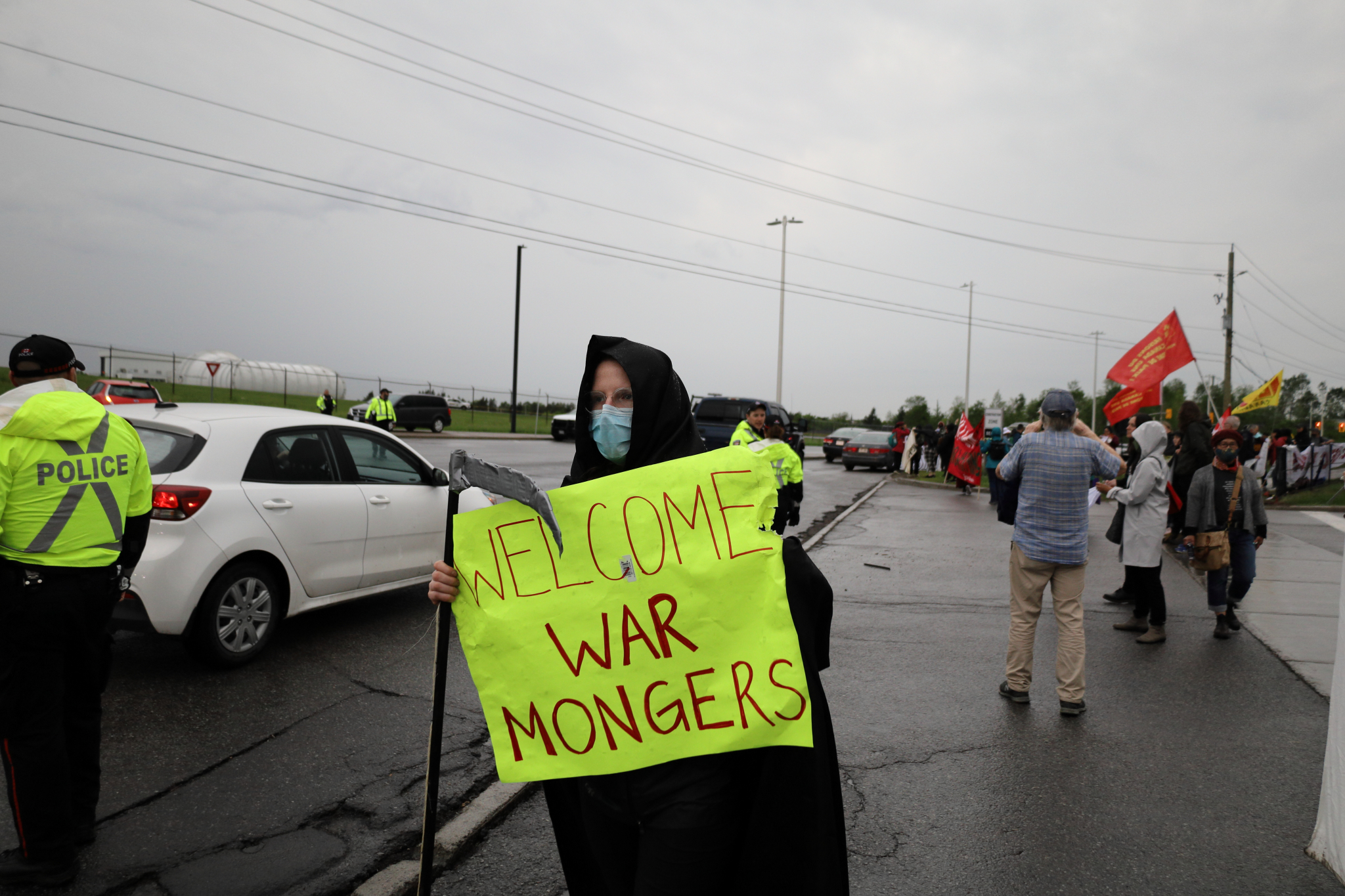 Demonstrators chanting and brandishing banners and signs periodically blocked the vehicle and pedestrian entrances of Ottawa’s E.Y. Centre as attendees streamed into the parking lot to register for the annual global defence and security trade show CANSEC.

One protester, dressed in the grim reaper’s signature robe and scythe, stood at the vehicle entrance, waving at drivers as they tried to get through the crowd of anti-war campaigners. An expected 12,000 people and 55 international delegations will attend the two-day event, organized by the Canadian Association of Defence and Security Industries. CANSEC showcases leading-edge technology and services for land-based, naval and aerospace military units to international delegates and top government and military officials.

Early on June 1, over 100 anti-war campaigners gathered outside Ottawa's EY Centre to protest the opening of Canada's largest weapons and defence fair to condemn war profiteering. In this video, one group of protesters can be seen obstructing access to the venue by slowly marching across one of the vehicle entrances. Video by Natasha Bulowski / Canada's National Observer

But before attendees could marvel at the weaponry on display inside, they had to pass the protest. Although police worked to keep demonstrators out of the parking lot, a few managed to sneak past and lie down to block cars from entering the lot.

They were promptly carried or dragged away by police.

The protests did not stop the show inside the exhibition centre, where military leaders, government officials, diplomats and politicians mingled amid the latest and greatest military technology. Displays featuring massive armoured vehicles, guns, protective gear and night-vision technology stretched as far as the eye could see. After a keynote speech by federal Defence Minister Anita Anand, attendees wandered through more than 300 exhibition booths, browsing the merchandise, asking questions and networking.

For General Motors Defense, the trade show is an opportunity to figure out what the Canadian clientele wants, so the company can build equipment to match requirements that will exist in future programs, Angela Ambrose, vice-president of government relations and communications for the company, told Canada’s National Observer.

While sales “can certainly happen at a trade show,” Ambrose says networking with potential customers and competitors is the main priority, which lays the groundwork for future sales.

Military officials, government bureaucrats, diplomats and general attendees can get a feel for weapons, but while some posed happily with their gun of choice, others were camera-shy.

Not all attendees will want their faces or products photographed “due to the sensitive and competitive nature of the industry and/or security considerations,” the event’s media guidelines state, adding: “Before recording or photographing any person, booth or product, media should ensure they have consent.”

Those manning the booths kept an eye on photographers, sometimes interjecting to dissuade them from taking photos containing people’s faces.

At the outdoor exhibit, attendees inspected, photographed and posed in armoured vehicles and helicopters. Canada’s National Observer was told not to publish photographs of a massive military vehicle flown into the trade show from the U.S.

Nicole Sudiacal, one of the protesters, said the arms, guns and tanks being showcased at CANSEC “have been directly involved and complicit in wars against the people all over the world, from Palestine to the Philippines, to places in Africa and South Asia.” Armies, militaries and governments are “profiting off of the deaths of millions and billions of people around the world,” most of whom are Indigenous communities, peasants and working-class people, the 27-year-old told Canada’s National Observer.

“These are the people who are selling their guns to fight against resistance across the world, who are fighting against climate [action] … they are directly complicit, so we're here to stop them from profiting off of war.”

A news release from World Beyond War states that Canada is the second-biggest weapons supplier to the Middle East and has become one of the world’s top arms dealers.

Lockheed Martin is among the wealthy corporations at the trade show and “has seen their stocks soar nearly 25 per cent since the start of the new year,” the news release says.

Bessa Whitmore, 82, is part of the Raging Grannies and has been attending this annual protest for years.

“The police are much more aggressive than they used to be,” said Whitmore. “They used to let us walk here and block the traffic and annoy them, but now they're being very aggressive.”

As cars slowly moved with help from the police, Whitmore and other protesters stood in the rain, yelling at the attendees and disrupting to the best of their ability.

She is sad to see cars lined up to “buy weapons that are going to kill people someplace else.”

“Until it comes here, we won't react … we're making a lot of money selling killing machines to other people.”

This is an important story.

This is an important story. It's indicated in the analysis that Canada is said to be the 'second biggest supplier of weapons to the Middle East" and has become one of the world's biggest arms suppliers.... if accurate, probably as a proxy/subsidiary to American arms manufacturers... though Bombardier wants to sell a bunch of light armoured vehicles to the Saudi regime.
How did Canada get here? Are Canadians aware of our evolving 'stature' in the armaments industry? Leaving aside Canada's previous reputation as being a nation that ffostered (and hopefully still fosters) peace-keeping, this (in my view) dark "diversification" of the Canadian economy is indicative that we're quickly becoming two faced... and complicit in creating circumstances in other nations which move them further down an expensive (and frequently dubious) path..... one which frequently aggravates regional tensions. It's considerably easier to adopt an aggressive external (and internal) posture and to do nasty things when a nation is armed to the teeth, and very often this type of armaments investment means far less, and even meagre, funding for necessary social development and other more credible expenditures/investments in the nation that goes on the military 'kit' shopping sprees. I remember President Obama within the past 6 years of so criticizing Russia's economy, saying it's essentially predicated on O and G... and weapons sales, Canada doesn't need to go down this path. This is not healthy.

Sincere apologies... not Bombardier, but 'General Dynamics (Canada)'... so a case still speaking to one of my points, a subsidiary to a colossus in global weapons sales (Gen. Dynamics) ...based in America... but setting up a plant in Canada. This is not a wise diversification of our own country's economic base.