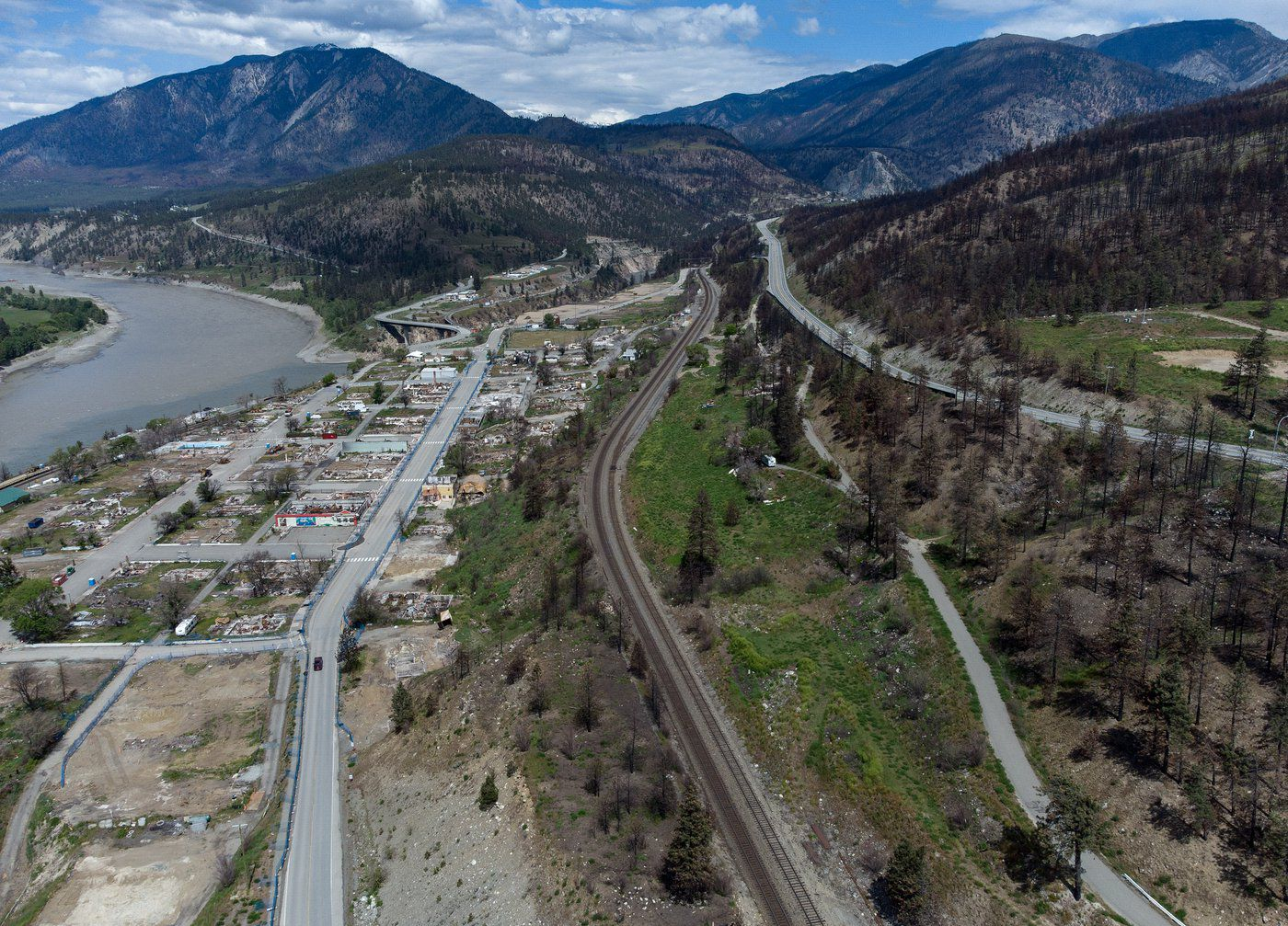 The burned-out remains of businesses and properties destroyed by last year's devastating wildfire are seen along with rail lines, centre, and the Trans-Canada Highway, upper right, in Lytton, B.C., on May 21, 2022. Photo by The Canadian Press/Darryl Dyck
Previous story
Next story

Harjit Sajjan toured the ruins of Lytton, B.C., on Tuesday, witnessing the full impact of what a wildfire did to the community when it raced through the village in June last year.

Just before the tour, the minister of international development announced $77 million in funding from the federal government to help Lytton rebuild a fire-resistant and energy-efficient community.

Owen Collings, a former resident and site support worker in Lytton, led the minister through the village, pointing to scorched remains of businesses and properties alongside blackened trees, describing the buildings that once stood there.

"I've been to a lot of places internationally but when you see it in your home country, it really hits you," Sajjan told Collings, referencing his time as federal defence minister.

Sajjan, the member of Parliament for Vancouver South, said $64 million of the federal funds will be used to help rebuild public buildings, $6 million has been set aside for residents to bring their homes up to the same standards, while small- and medium-sized businesses will get $7.2 million to help them restart.

Sajjan said the disaster showed that fire spreads from one building to another, and making buildings fire-resistant would benefit the whole community.

Lytton could be a model of climate change recovery for the rest of Canada, said Sajjan, who made the announcement at a gas station on the highway outside of Lytton that escaped the wildfire.

"With extreme weather fuelled by climate change becoming more common, we need to work together as we are doing here in Lytton to show that we can rebuild in a better way. In a more resilient, green and sustainable way."

Lytton's Mayor, Jan Polderman, said in a statement that the village council has already introduced a new bylaw to support a vision of building to net-zero, which emits no greenhouse gases.

The goal is for residents to have access to their homes to start rebuilding by the end of September, Polderman said at the news conference.

However, he said it could take years to fully rebuild the village, citing other fire-ravaged communities such as Slave Lake and Fort McMurray in Alberta.

"Generally speaking, you're looking at a four- to eight-year timeline to have a community rebuilt," he said.

"Lytton is the epicentre of climate change disasters in North America," he said. "We're moving in the right direction to have the protocols and the infrastructure in place to see things done better in the future, but we're not there yet."

The fire started the day after Lytton set a Canadian heat record of 45.6 C. Two people caught in the fast moving inferno died.

The federal government announced last week it was advancing a $207-million payment to B.C. as it finalizes applications for the federal disaster assistance fund for communities affected by last year's wildfire season.

"It's a little late but it's definitely needed," she said in an interview. "Better late than never."

This report by The Canadian Press was first published June 14, 2022.

Fire resistant buildings. I need considerably more detail to decide if there is anything man-made that can "resist" a wildfire tornado. Throughout the entire article there is nothing that suggests any level of government has a focus on prevention. All seem to ignore the probability that there will be future Lyttons, future floods from fire ravaged mountains, future landslides,... Who is going to pay for all this when our governments can't seem to bring themselves to tax or penalize the corporations willfully contributing to BC's climate disasters. As the climate scourge works it way across the continent, who is going to bear the brunt of the distress, the financial ruin, the destruction of communities, of families, of economies? Care to guess?