Two bodies discovered in the small town north of Hope 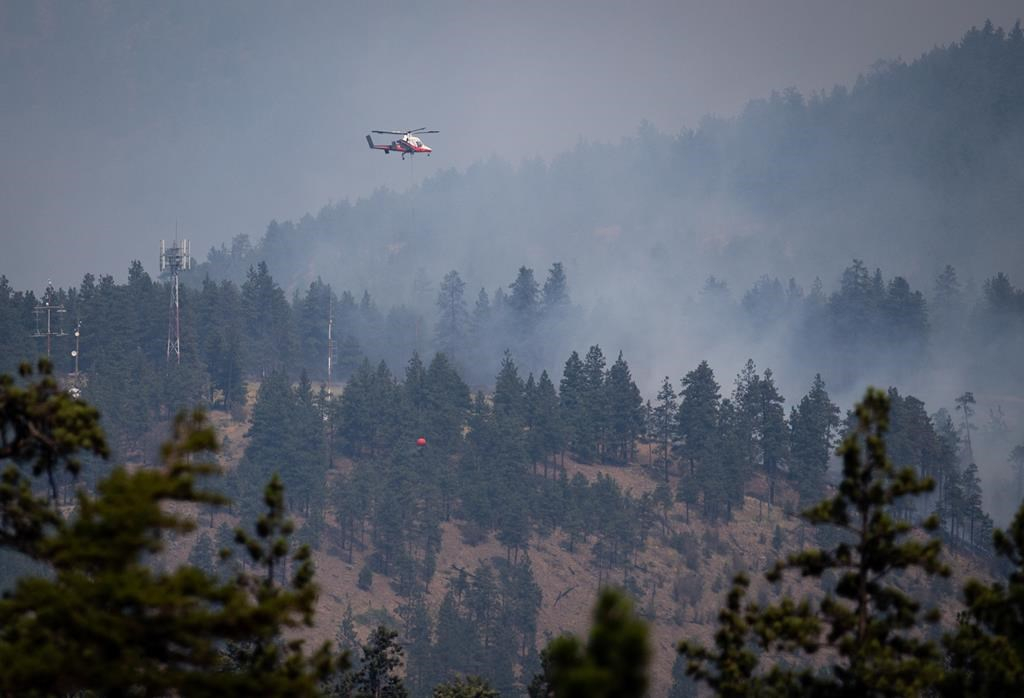 A helicopter pilot prepares to drop water on a wildfire burning in Lytton, B.C., on Friday, July 2, 2021. File photo by The Canadian Press/Darryl Dyck
Previous story
Next story

A team that ventured into Lytton, B.C., for the first time since the village was ravaged by a wildfire this week found two bodies, the provincial coroners service said Saturday evening.

The BC Coroners Service announced Friday that two people were presumed dead following the fire that tore through the village on Wednesday, but said it was not safe to enter the area.

"With the assistance of the RCMP, the special investigations team at the BC Coroners Service was able to safely access the site today and we can now confirm two fatalities in Lytton," a spokesperson said in an email. "Our investigation is ongoing at this time, but preliminary findings at the scene suggest the decedents match two deaths reported by their family member."

The coroners service said it has not received any other reports of deaths linked to the fire, but officials have said that some people remain unaccounted for, in large part due to the hasty evacuation of the village on Wednesday night.

That evacuation was the subject of criticism earlier Saturday, as the head of the Nlaka'pamux Nation Tribal Council — of which the Lytton First Nation is a member — said the government ignored the needs of community members in the early hours of the emergency.

Chief Matt Pasco said the tribal council was forced to try to save lives with little to no help from the government.

Pasco, who operates a ranch near Ashcroft, B.C., north of Lytton, said the first contact he received from the government came 12 hours after evacuations began, and it was regarding his cattle, not about affected community members.

"It was an abysmal attempt at the very thing they're meant to do," he said in an interview Saturday. "They had processes in places for our cattle but none for Nlaka'pamux people."

Pasco said the government's shortfalls can be traced to the province's treatment of Indigenous peoples and lack of recognition of their jurisdiction when it comes to land management and stewardship.

"Yes, we do have coordination problems because (the province) is not set to take care of Indigenous issues or Indigenous peoples," he said.

"While there were challenging factors, early communication with the Nlaka’pamux Nation Tribal Council and the Oregon Jack Creek Band didn’t live up to expectations," he said.

He said the ministry has taken steps to address gaps in protocols that contributed to this situation.

Pasco said the tribal council is working with the Lytton First Nation and other affected communities to figure out how many members remain unaccounted for.

He said the most pressing questions concern what happens next for the community.

"It's so devastating that I cannot find the English words to describe the devastation. It's hard to fathom," he said. "What does next week look like? What does the first long weekend of September look like when we have the children go back to school?"

New mapping from the BC Wildfire Service shows the wildfire has grown since Friday night.

Kaitlin Baskerville, with the BC Wildfire Service, told a public meeting Saturday that current conditions are comparable to mid-August.

Mark Healey, also with the service, told the meeting that fire crews are working to stop the spread of the fire towards Spences Bridge as well as stop it from crossing the Fraser River.

Orders issued by the Thompson-Nicola Regional District said the fire in the Durand Lake area has started threatening structures and the safety of residents.

Federal ministers have pledged to support B.C.'s fire fighting efforts, with Public Safety Minister Bill Blair saying the government has been preparing for the wildfire season for the past few weeks.

The cause of the wildfire that devastated Lytton is under investigation, although Premier John Horgan said he had heard anecdotal evidence linking the start of the fire to a train running through the community.

The office of federal Transport Minister Omar Alghabra said in an emailed statement that it would take necessary action should any potential non-compliance with Canada's rail safety laws and regulations be identified.

This report by The Canadian Press was first published July 3, 2021.