Pollen and heat: A deadly mix for global agriculture 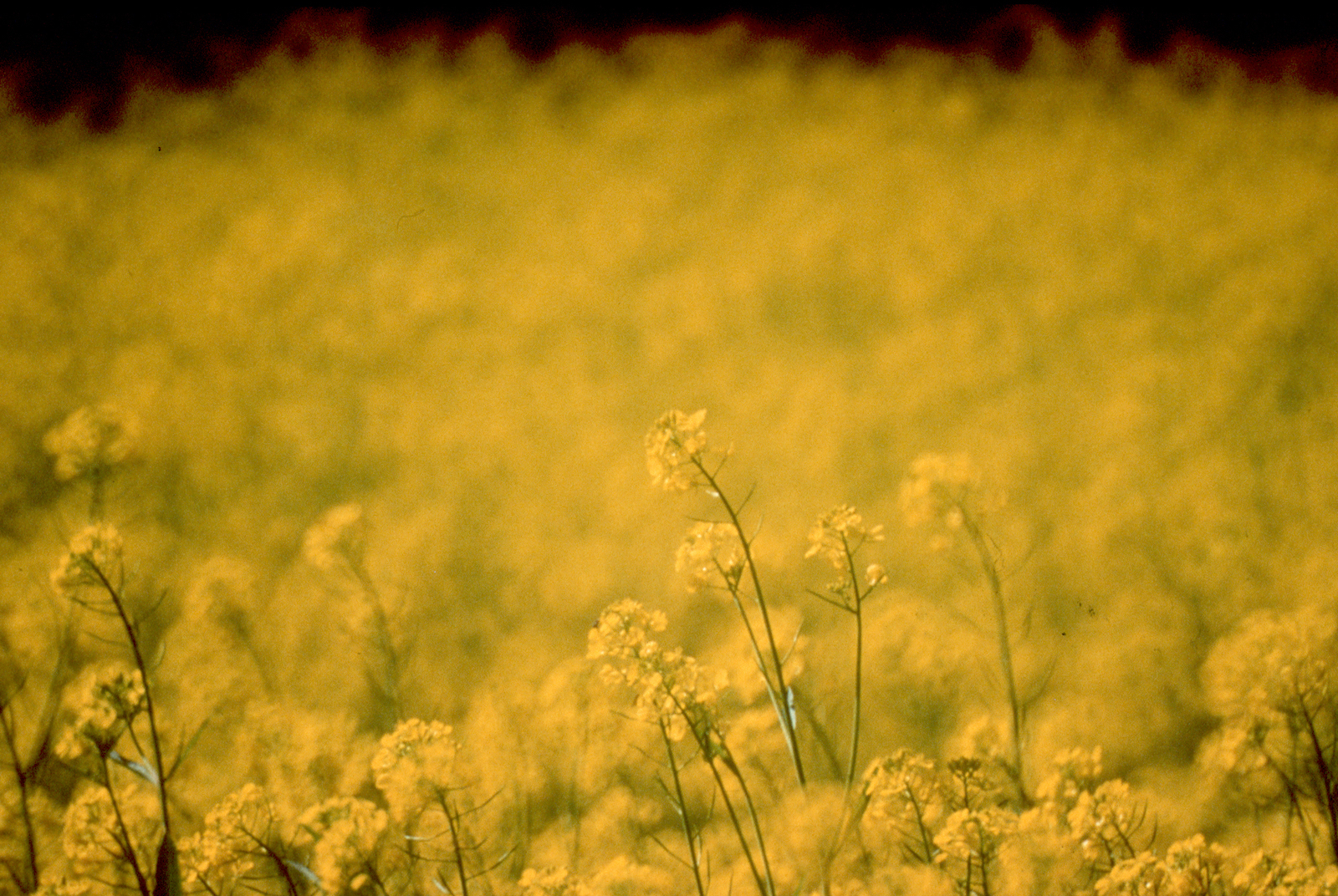 Heat is a pollen killer. Even with adequate water, heat can damage pollen and prevent fertilization in canola and many other crops, including corn, peanuts and rice. Photo by Plant Industry / CSIRO (CC BY 3.0)
Previous story

Last June, Aaron Flansburg felt the temperature spike and knew what that meant for his canola crop. A fifth-generation grower in Washington state, Flansburg times his canola planting to bloom in the cool weeks of early summer. But last year, his fields were hit with 108 F Fahrenheit heat just as flowers opened. “That is virtually unheard of for our area to have a temperature like that in June,” he says.

Yellow blooms sweltered, reproduction stalled, and many seeds that would have been pressed for canola oil never formed. Flansburg yielded about 600 to 800 pounds per acre. The previous year, under ideal weather conditions, he had reached as high as 2,700.

Many factors likely contributed to this poor harvest — heat and drought persisted throughout the growing season. But one point is becoming alarmingly clear to scientists: heat is a pollen killer. Even with adequate water, heat can damage pollen and prevent fertilization in canola and many other crops, including corn, peanuts, and rice.

For this reason, many growers aim for crops to bloom before the temperature rises. But as climate change increases the number of days over 90 F in regions across the globe, and multi-day stretches of extreme heat become more common, getting that timing right could become challenging, if not impossible.

Faced with a warmer future, researchers are searching for ways to help pollen beat the heat. They’re uncovering genes that could lead to more heat-tolerant varieties and breeding cultivars that can survive winter and flower before heat strikes. They’re probing pollen’s precise limits and even harvesting pollen at large scales to spray directly onto crops when weather improves.

At stake is much of our diet. Every seed, grain and fruit that we eat is a direct product of pollination, explains biochemist Gloria Muday of North Carolina’s Wake Forest University. “The critical parameter is the maximum temperature during reproduction,” she says.

The creation of seeds begins when a pollen grain leaves the anther of a plant’s male reproductive organ (the stamen), lands on the sticky stigma of a female reproductive organ (the pistil), and sets about growing a tube. This tube is formed by a single cell that grows through the stigma and down a stalk called the style until it ultimately reaches the ovary, where it delivers the pollen grain’s genetic material. Pollen tube growth is one of the fastest examples of cellular growth in the plant world, says Mark Westgate, an emeritus professor of agronomy at Iowa State University. “It grows up to one centimetre an hour, which is incredibly fast,” he says.

Growing at such a clip requires energy. But at temperatures starting around 90 F for many crops, the proteins that power a pollen grain’s metabolism start to break down, Westgate says.

In fact, heat hinders not only tube growth but other stages of pollen development as well. The result: a pollen grain may never form, or may burst, fail to produce a tube, or produce a tube that explodes.

At stake is much of our diet. Every seed, grain and fruit that we eat is a direct product of pollination, explains biochemist Gloria Muday of North Carolina’s Wake Forest University. #Agriculture #GlobalFoodSupply

Not all cultivars are equally susceptible to heat. Indeed, researchers are still working out the molecular mechanisms that allow pollen from some crop cultivars to survive while pollen from others dies off.

For example, fertilization is notoriously heat-sensitive in many cultivars of tomato — a crop that in 2021 covered 274,000 acres of open fields in the United States alone. If the weather gets too hot, says Randall Patterson, president of the North Carolina Tomato Growers Association, “the pollen will burn up.” Patterson times his tomato plantings to flower during the longest stretch of nights below 70 F and days below 90 F. Typically, he has a three-to-five-week window in which the weather co-operates for each of his two annual growing seasons. “If it does get hotter, and if we do have more nights over 70 degrees,” he says, “that’s going to close our window.”

Muday studies pollen from a mutant tomato plant that may carry clues for keeping that window open. In 2018, her team reported that antioxidants known as flavonols play an important role in suppressing molecules, called ROS, that would otherwise increase to destructive levels at high temperatures.

With funding from the National Science Foundation, Muday is now part of a multi-university team aiming to uncover the molecular mechanisms and underlying genes that could help tomato pollen weather a heat spell. The hope is that breeders could then incorporate these genes into new, more resilient tomatoes.

Insights from her initial study have already helped Muday develop a tomato that produces especially high levels of flavonols. “They appear to be extra good at dealing with high-temperature stress,” she says. Ultimately, Muday expects they’ll find that the path from heat to pollen death involves many players beyond flavonols and ROS, and so potentially many targets for fixes.

Meanwhile, breeders of tomatoes and other crops are already working to develop cultivars that can better handle heat. “If farmers in the Pacific Northwest or in the Mountain States or in the High Plains are going to grow peas, and the climate is going to be warmer, then we have to have peas with more heat tolerance,” says pulse crop breeder and plant geneticist Rebecca McGee of the USDA Agricultural Research Service in Pullman, Wash.

Pulse crops — so named for the Latin “puls”, meaning thick soup — include dried beans, peas, lentils, and chickpeas. These plants don’t require a lot of moisture. But if temperatures get too hot, the pollen aborts, says Todd Scholz, vice-president of research for the USA Dry Pea and Lentil Council. The same heat wave that pummelled Flansburg’s crop last year decimated pulse plants. Lentil and dry pea harvests fell to about half of the average production, while chickpeas fell by more than 60 per cent.

McGee is breeding some of her peas and lentils to be more resilient to high temperatures. But with other projects, she’s taking a different and somewhat counterintuitive approach: breeding crops that can withstand cold.

In the northern United States, growers typically plant pulse crops in the spring. McGee is breeding peas, lentils, and chickpeas that are instead sown in autumn. The idea is that these cultivars will survive the winter and then get a jump-start on flowering early in the summer — giving them a fighting chance to pollinate successfully before a heat wave.

Last year, McGee released to seed producers a limited amount of the first three autumn-sown, food-quality pea cultivars for her region. She says they flower about two weeks earlier than most spring-sown peas — and with double the yield. Of course, these crops aren’t guaranteed to flower before high heat arrives, McGee says, “but you don’t have to worry as much.”

At Michigan State University, Jenna Walters is studying how temperature affects pollen — and pollinators — in a fruit crop. On Memorial Day weekend of 2018, the temperature in southwestern Michigan lingered at 95 F while bees buzzed between clusters of delicate white blossoms on blueberry bushes. Come harvest, many fruits were smaller than usual or had failed to form altogether. In a state that averages around 100 million pounds of blueberries a year, growers harvested just 66 million.

Walters — a PhD candidate earning a dual degree in entomology and ecology, evolution, and behaviour — is investigating what exactly went wrong. She began by pinpointing a blueberry pollen grain’s heat limit — exposing pollen in petri dishes to a range of temperatures and monitoring the pollen for 24 hours. Her results, not yet published, suggest that at temperatures above 95 F, pollen tubes fail to grow.

Walters also simulated an acute heat wave by exposing pollen grains to 99.5 F heat for four hours and then lowering the temperature to 77 F for another 20 hours. “There is basically no return,” Walters says. “[Heat] exposure for just four hours is enough to lead to permanent damage.”

She is now confirming these results in actual blueberry bushes in growth chambers set to different temperatures. If the findings hold, she says, 95 F could trigger growers to periodically flip on their misting systems to cool fields. But growers would have to consider tradeoffs. “A lot of pathogens are spread via high humidity or water, especially during that flower-opening period,” she says. And when misting machines are on, most pollinators aren’t likely to visit.

It’s possible that overheated blueberry bushes might also lead to fewer blueberry pollinators over time, Walters says. She and her colleagues are comparing the nutritional content of heat-stressed and unstressed pollen, searching for differences in proteins, carbohydrates, and other factors that could be critical to a bee’s health.

This year, she will fill eight 6-by-12-foot mesh-walled cages with more than two dozen potted blueberry bushes each, as well as a few female blue orchard bees — one of the many bee species that pollinates blueberry flowers. For four hours a day, over the course of four or five weeks, she’ll sit inside her cages and watch the bees lay eggs and forage for pollen on bushes that, in half of the cages, had been exposed to heat stress early in their bloom.

The concern, says Walters, is that if heat is destroying pollen, nutritional stress will cause females to make more male eggs, which require less pollen to produce. But male blue orchard bees are less useful to a blueberry grower, since only the females pollinate and lay eggs to start the next generation. To compensate for pollen loss, Walters says, growers might consider planting strips of wildflowers that are more heat tolerant and could provide pollinators with additional nutrients.

And then there are the technofixes. Mark Westgate, of Iowa State, is the chief science officer at PowerPollen, an Iowa-based ag tech company focused on improving pollination for producers of hybrid corn seed — a crop in which pollen fails at temperatures above 104 F.

Using a tassel-shaking collection device attached to a tractor, the company gathers large quantities of ripe pollen in fields, then stores those living pollen grains in a controlled environment. PowerPollen returns to apply that pollen when weather conditions favour fertilization — typically no later than five days after collection. The window sounds small, but it could enable farmers to dodge an especially hot day. The company is working on extending this time frame and on applying its technology to other crops.

For some, a simpler solution may be switching crops altogether. “There are pulses that grow in tropical climates, so it may be that you pick a different cultivar,” says Scholz, of the Dry Pea and Lentil Council. But some pulses that stand up to heat, he notes, such as fava beans and black-eyed peas, require more moisture than dryland farmers of the Pacific Northwest can supply.

Flansburg, in Washington, doesn’t want to switch. He remains hopeful that breeding efforts will help him continue to grow the canola and other crops his family has cultivated for generations. Still, he worries about the future.

“There’s an overall picture of a changing climate that we’re going to have to address and deal with if we’re going to be able to continue to feed people,” he says. “There’s just a limit to how much heat a plant can take.”

Jenna Bevacqua charges ahead for a brighter future