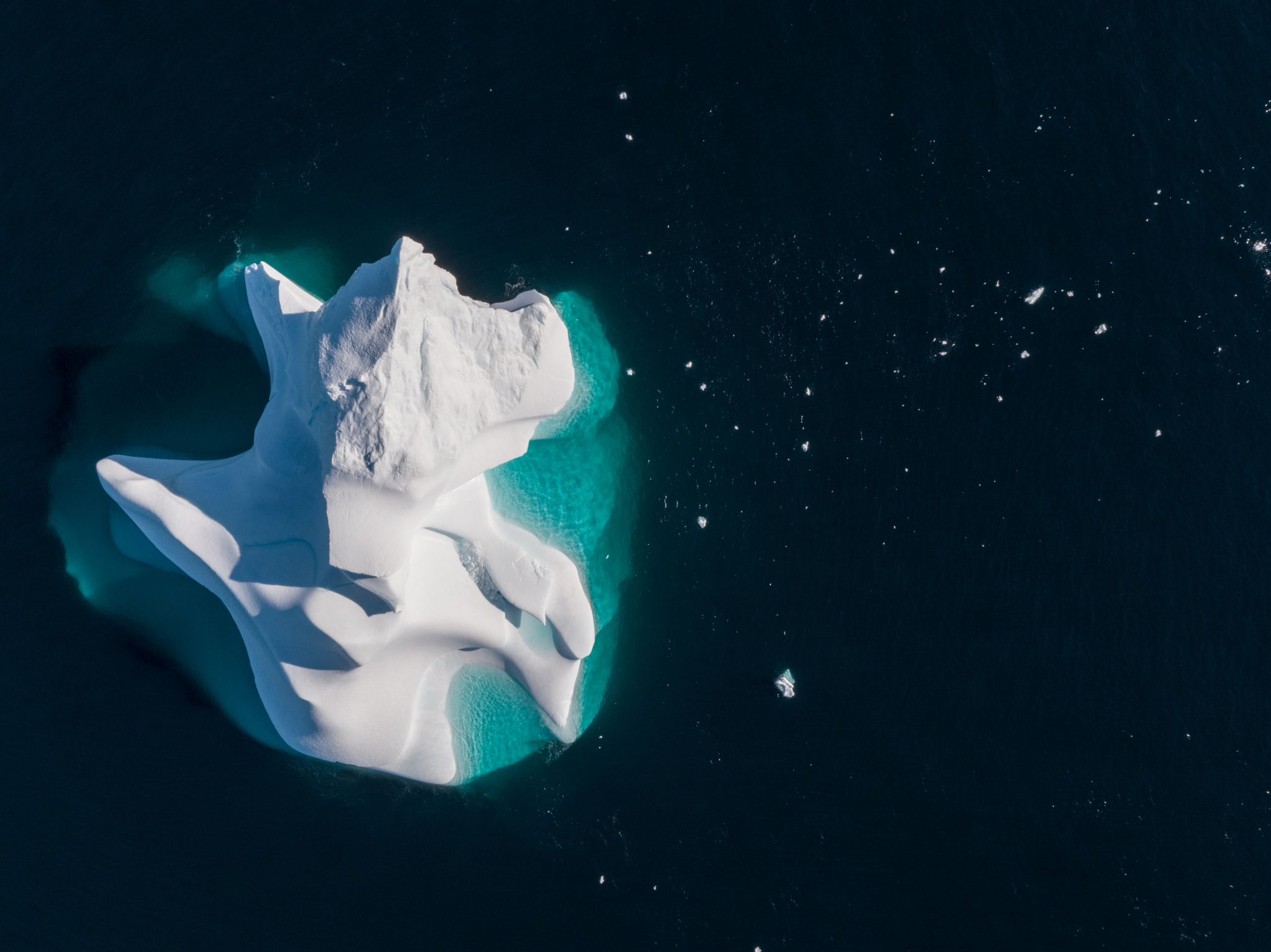 There’s a phenomenon when an iceberg, after breaking off from a glacier and its weight is imbalanced, flips. It’s a process that reveals what had been submerged, bringing to the surface a whole new glacial landscape.

It’s a process Inuit photographer Robert Kautuk thought he captured in Ice Break, says Rebecca Basciano, curator for Dark Ice, a new collaborative exhibition at the Ottawa Art Gallery by Kautuk and Ottawa artist Leslie Reid, who works at the gallery. The phenomenon is a metaphor for the exhibition itself.

Reid, a settler artist from Ottawa, began working in the North to retrace her pilot father’s flight paths across the Arctic landscapes. Reid’s father flew for the Canadian Air Force and would spend nearly half the year flying photographers across the territories to map the Arctic during the Cold War, Reid told Canada’s National Observer.

Reid returned to the Arctic almost a decade ago to retrace his travels. As a participant in the Canadian Forces Artists Program and the Canada C3 expedition through the Northwest Passage, Reid did her own mapping of a changing Arctic climate.

Kautuk is a photographer based out of Kangiqtugaapik (Clyde River) in Nunavut. Kautuk didn’t set out to exhibit his photographs. He viewed photography as a type of mapping, a way to serve his community and document the landscape and traditional practices of his nation.

The settler-Inuit collaboration began after Reid bore witness to the devastations of colonialism and climate change in the Arctic. She saw the changes in the landscape when comparing her travels with similar Cold-War era photographs her father would have participated in.

From her travels, Reid produced a video shown in the exhibition titled Uluriak, named after its subject, Uluriak Amarualik, a Canadian Ranger (military reservists of the North). In the video, Amarualik describes how her grandparents were forcibly relocated from their home communities on the Hudson Bay and Baffin Island to Resolute, one of Nunavut’s most northern communities. The images captured in the video show the same route Amarualik’s family took when they were relocated by the Canadian government.

“She said she joined the rangers to thank her grandparents for surviving,” Reid says, noting her motivation was to protect the lands of her ancestors.

There’s a phenomenon when an iceberg, after breaking off from a glacier and its weight is imbalanced, flips. It’s a process that reveals what had been submerged, bringing to the surface a whole new glacial landscape. #DarkIce

Reid says when Amarualik told her personal story of her ancestors in the North, it caused her to reflect on her own work in the Arctic, and question her reasons for working there. That reflection deepened her need for a collaboration with Inuit, rather than a settler seeing.

Reid knew if Dark Ice was a solo exhibition, it wouldn’t tell the entire truth of the Arctic. She says she had to collaborate with an Inuit artist — and Kautuk’s unreserved care for his own culture and community drew her to his work and the dialogue started.

When Kautuk agreed to exhibit his work for the first time for Dark Ice, the iceberg flipped, and an Inuit perspective of the North entered into discourse with settler witnessing.

The exhibition is translated into Inuktitut syllabics as well as English and French. For the history of the Arctic to be anything close to truthful, all perspectives must be included, Reid said.

“It is like a flip, in a way,” Reid says. “For me, it’s not supposed to be pictorial, nor is it my narrative. It’s about a much larger narrative.”

That larger narrative is shown in the interplaying themes of the exhibition: light and dark (like the cycles of the Arctic, Basciano says), settler and Inuit, ice and ocean, far and near (Ottawa to Kangiqtugaapik/on-ground and drone photography).

“They’re saying the Earth is warming up. But I think it feels like a cycle,” Kautuk said in a media release by the art gallery.

He is referring to cyclical forces impacted by an anthropocene that unleashed the climate crisis and colonial violence. And it led to the exhibit’s name, Dark Ice, a play on a geological phenomenon where carbon-based soot gathers on ice causing it to hasten the heating of ice formations.

There is an urgency to this exhibition. The urgency of the climate crisis, Inuit self-determination, and of nation-to-nation collaboration to reconcile past injustices, which are reflections of the cycles of reclamation, healing, and the landscape.

In Dark Ice, an iceberg has flipped.

Dark Ice will tour in Iqaluit, Winnipeg, and Sarnia after exhibiting in Ottawa