“The planet already is 1.2 C hotter, yet new fossil fuel projects every day accelerate our race towards the precipice. Enough is enough." 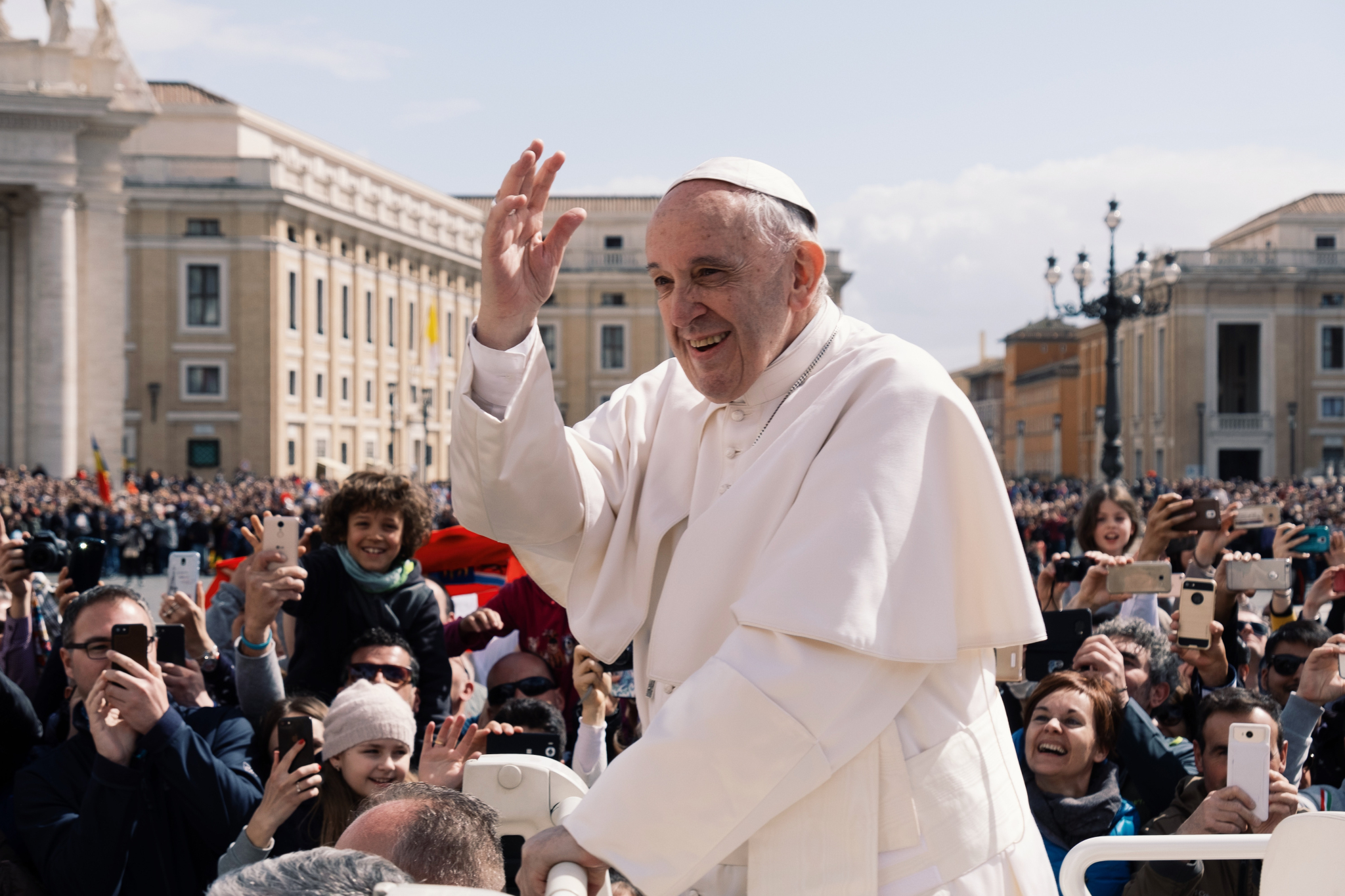 The Vatican is joining dozens of governments, cities, academics and Nobel Prize laureates in a global effort to restrict fossil fuel development.

On Thursday, the Vatican announced it was joining the Fossil Fuel Non-Proliferation Treaty, an initiative endorsed by major cities like Toronto, Montreal, Vancouver, Ottawa, Los Angeles and London, over 1,300 organizations, and thousands of individuals squarely focused on phasing out the industry most responsible for climate change.

“The planet already is 1.2 C hotter, yet new fossil fuel projects every day accelerate our race towards the precipice. Enough is enough,” said Cardinal Michael Czerny, the Canadian Jesuit who runs the Vatican’s ecology and development office, in a statement.

“All new exploration and production of coal, oil, and gas must immediately end, and existing production of fossil fuels must be urgently phased out.”

Inspired by nuclear weapon non-proliferation agreements, the treaty aims to prevent fossil fuel expansion and phase out the industry over time. It can be seen as a bottom-up strategy, with individuals, cities and sub-national governments signing on, while the Beyond Oil and Gas Alliance, led by Costa Rica and Denmark, takes a more top-down approach by signing countries like France and Ireland on to its international alliance.

The decision to endorse the treaty follows the Vatican’s earlier call on Catholic institutions around the world to divest from fossil fuels, and complements new investment guidance approved by Pope Frances, published earlier this week, representing a significant shakeup in how the Vatican manages finances. The new rules require funds managed by Vatican bodies to transfer their assets to its central authority for better oversight and to “contribute to a more just and sustainable world.”

“There is a finite science-based carbon budget to keep heating to no more than 1.5 C, which means most fossil fuels need to remain in the ground,” Mark Campanale, founder of the Carbon Tracker Initiative and steering committee member for the treaty, said in a statement. “This latest endorsement from the Vatican makes it even harder for world leaders to ignore the central role of fossil fuels in the climate catastrophe unfolding around us.”

Earlier this month, 35 faith-based institutions from seven countries announced plans to divest from fossil fuels. Among them were two Canadian Catholic orders: the Congregation of Sisters of St. Joseph in Canada and Our Lady’s Missionaries.

"We want to be part of the collective movement to make choices that make it more possible for all life to flourish,” said Sister Margo Ritchie, the congressional leader of the Sisters of St. Joseph in Canada in a statement. “It is clear that those living in deepest poverty are most affected by the effects of the climate crisis and the least responsible for creating them.

“Quite simply, it is one way of listening to the call of Spirit at this moment in our history."

“This latest endorsement from the Vatican makes it even harder for world leaders to ignore the central role of fossil fuels in the climate catastrophe unfolding around us," says @CampanaleMark

Next week, the Archbishop of Canterbury, who leads the Anglican Communion, is convening the 15th Lambeth Conference –– a once-per-decade meeting of bishops to discuss issues for the Church and the world at large. This year, the environment sits front and centre.

“Climate change, biodiversity loss and pollution threaten both people and planet. Yet, this is still God’s world and God calls us to respond as Easter people: bearers of hope,” reads a guide sent to Anglican bishops ahead of the conference.

“This is a call to the Instruments of Communion, to all bishops and people of our churches, and to world leaders to take bold and decisive action in spiritual and practical ways … to limit the global average temperature rise to 1.5 degrees above pre-industrial levels,” it adds.

As a global organization, climate change is seen by the Anglican Communion as something experienced radically differently by its members.

“We are the people facing devastation in disaster-stricken communities. We are all the polluters, especially in wealthy countries. We are people living in poverty and on the margins. We wield power and political influence. We are experiencing loss and damage of our land, homes and livelihoods. We are investors with financial capital. We are first responders to disasters and those who accompany communities on the journey of recovery and resilience.”

By the end of the conference, it’s expected the Anglican Communion will call on leaders of wealthy countries to scale up financing to developing countries to help deal with the impacts of climate change, stop all new fossil fuel expansion, and protect biodiversity.

I'm against all but the most

I'm against all but the most gentle, nudge-y of fossil fuel suppression efforts. People want to consume energy, want it very, very badly. If you bump up the price by 500%, consumption only goes down 16% (actual figures from oil price shocks of the 70s), so it's like trying to suppress drug-consumption via interdiction, which never worked.

GW Bush wasn't kidding about "America being addicted to oil"; we all are - addicted to the comforts, prosperity, and pleasures of cheap energy. We will get nothing but pushback, like the drug-warriors got for 70 years. You don't end an addiction by bumping up the price a bit, or trying to play "keep away". The political graveyards will be filled by those who even try, so they don't try.

We have to *replace* the cheap energy, an engineering problem, and we've about got it cracked. We need some cheaper storage, and about 600 labs are 7x24 on that problem. We could use some cheaper hydrogen for the big engines (cargo carriers, farm equipment), but I'm very confident that's coming, too.

We need government nudging to get us over the transition-hump, and we may need government to say, "well, electricity is going up from 10 cents/kWh to 13, and staying there, suck it up" - and we can suck up that much. But I have touching faith in my fellow engineers: they'll have it back down to 10 in years, not decades; and then to nine.

We the consumers of fossil

We the consumers of fossil fuel are so addicted to it we will never end our dependance no matter what the cost. government's are locked to fossil fuels to finance their reign of power. Canada has missed every single target that we have set. And will continue to do so until there is not a drop left.
If any party in power started to really reduce the drawing fossil fuel they would not last 3 months. It is an addiction and all the climate change nightmares won't stop it.
Just being realistic.

If we were trapped with that

If we were trapped with that as the only energy source, you'd be right. CRT computer monitors kept getting cheaper and better right up through 2008, when flatscreens, which were inherently better in several ways (weight, size, distortion, colour) dropped below them in price, because they'd been getting cheaper even faster. CRTs vanished in a year.

The same will happen with most fossil fuel solutions. Cars, most obviously, where electric has better acceleration, way lower costs, and is quiet. (I can't wait for cities with no diesel engines in buses and trucks; that ****ing noise...) But, you'll find it happens in every industry; "green" steel and concrete are as badly needed as green electricity, and there's a lot of promising research on both. I've got faith in it. Research does not "have" to pay off, as any dreamer about fusion can admit; but I'd lay good money at bad odds on green electricity, fertilizer, concrete, and steel being solved.