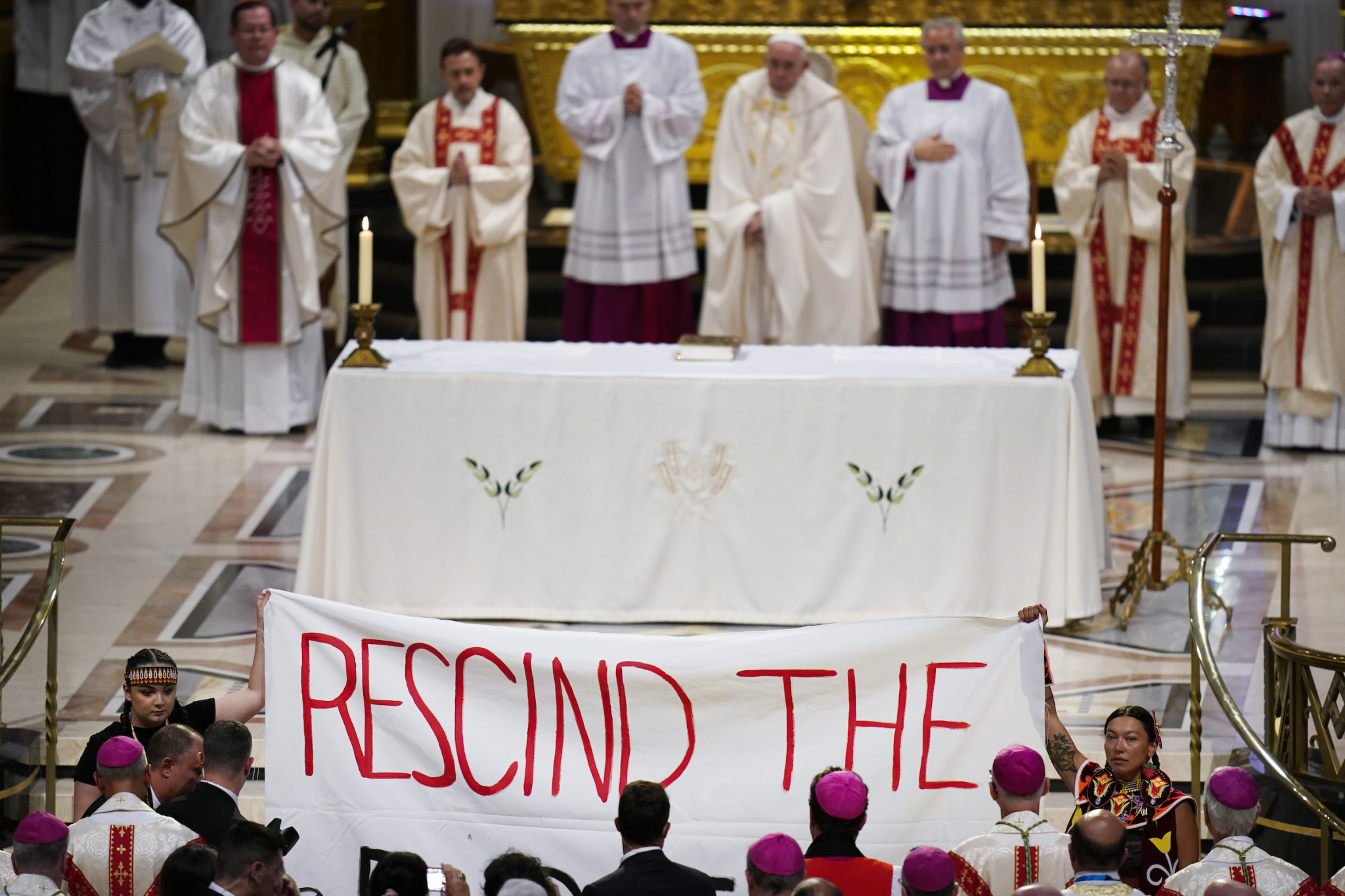 When Father Daryold Corbiere Winkler, an Ojibway priest, spoke to CBC after the open-air mass in Edmonton, Alta., on Tuesday, he felt like he had just experienced the twilight zone.

Canadian bishops speaking Latin in front of hundreds of residential school survivors harkened back to a time when every Catholic mass was delivered in Latin, including those some survivors attended as children.

“This was the liturgy that children would have heard when children were in residential schools,” Winkler told Canada’s National Observer. “Did they not think that liturgy would trigger survivors attending this mass? To hear Latin again? To see these anachronistic vestments being worn?”

There are things about Pope Francis’s visit that have hit the wrong note, he said, pointing to a lack of cultural communion and celebration of Indigenous traditions and spiritualities during the Edmonton mass.

Métis elder Tony Belcourt felt the alienation, too. In an interview this week with Canada’s National Observer, he said a real engagement with Métis culture was missing during the Pope’s visit to Lac Ste. Anne, which is a historic Métis community akin to Red River.

It’s a critique that has permeated the papal visit and raises questions about whether the Catholic Church is prepared to take more tangible steps toward reconciliation, including renouncing the Doctrine of Discovery, education, funding, returning of artifacts and other steps that have been asked of the Church.

The question is personal for Father Winkler. He’s a humble Catholic priest and pastor of a medium-size parish in Ottawa, but he’s also Ojibway. Like many Indigenous families, he is grappling with a legacy of colonial violence and intergenerational trauma. He says his mother passed away too young at 52, which he attributes to the legacy of colonialism.

“She died as a result of people telling her over and over again: ‘You’re inferior to us, your life isn’t as important as ours, you don’t matter as other people do.’ She had to find other sources of help that killed her in the end,” he says.

Winkler works inside the church but is critical of and challenges missteps and missed opportunities. His archbishop has even received hate mail asking why Winkler is allowed to say such divisive things.

Winkler’s adversarial approach is his way of speaking his truth as an Indigenous person and a priest.

Despite his disappointments, he remains hopeful things will change, mainly due to his reverence for Pope Francis.

The Pope has spoken volumes simply by travelling to Turtle Island, despite his pain and immobility, Winkler says.

Yet questions remain surrounding specific requests from Indigenous Peoples and echoed by the prime minister.

Justin Trudeau reportedly spoke with Pope Francis about the need to repatriate Indigenous artifacts, provide access to residential school documents and address the Doctrine of Discovery, according to a readout from the Prime Minister’s Office.

Indigenous people all over Turtle Island want to reclaim their lost artifacts — especially the Indigenous delegates who visited the Vatican earlier this year to hold talks with the Pope and saw artifacts from their own community shown in the Vatican Museum.

“When they saw that, it was like grief. It’s like having a stolen child and you see it in a museum. This is the emotional power of having artifacts returned to people,” Winkler says.

“This is about identity and sources of human experience.”

The Vatican should give back the artifacts, some centuries old, because it is more meaningful for them to return home, Winkler says; instead, they are displayed for tourists.

In a statement, Cindy Blackstock, executive director of the First Nations Child & Family Caring Society of Canada, questioned whether the Vatican will disclose all its residential school records following the Pope’s apology.

Residential school documents are kept in archives under lock and key for a reason, Winkler says.

He believes the documents may contain horrible secrets of what happened in those schools, “and who wants to share their secrets in public?”

“My guess is that they tell a story more gruesome than we already know — and they don’t want the public to know this,” he says.

Father Winkler was present when two Cree activists displayed a banner reading, “Rescind the Doctrine” in front of the mass held Thursday at Sainte-Anne-de-Beaupré Basilica near Quebec City during the papal visit.

The Doctrine of Discovery is a 15th-century religious document that gave explorers papal legitimacy to claim and colonize land they had “discovered.”

He called them incredibly brave women for holding the banner, fists raised, and applauded them for moving quietly and respectfully during the mass in protest.

“It’s emotional for us, and I don’t know if people get the emotion. They might be watching, not realizing how powerful it is for us who want to see reconciliation come about,” he says.

Next steps for the Church

Winkler believes the way forward for the Church is to follow the next calls to action of the Truth and Reconciliation Commission (TRC): call 59 asks church parties to create strategies in parishes to teach the Church’s role in colonization and residential schools and explain why an apology is necessary.

Still, the apology is a huge step for Winkler, though it’s only a first step. The top of the mountain is a far way off.

“We’re going to experience tons and tons of resistance, but if we don’t do it, we’ll never be happy, fulfilled, content as peoples.”

From the point of view of a

From the point of view of a convert to catholicism, I can honestly agree with every statement expressed by father Winkler. My group of ladies who are making our way through "Listening to Indigenous Voices", a Jesuit forum course on Indigenous issues, have not only learned volumes that everyone in this country of Canada needs to know, we conclude that the changes required to get anywhere near Indigenous peoples' truth are massive. And they need to start with not only true rescinding of the Doctrine, but also removing it's poisonous imprint on the Canadian constitution and all other legislation patterned on the Doctrine.

I find it truly fascinating

I find it truly fascinating (I'm sure I'm not the only one) that you, a woman, have voluntarily CHOSEN catholicism, a deeply patriarchal religion that absolutely refuses to even consider women as priests in its ultimate old boys' club. Those of us outside the bubble that is religious belief see it as comparable to Indigenous people looking to the agents of their attempted genocide for "understanding." In the same vein, I have never understood why gay men seek to adhere to a religion that soundly rejects them as well; it suggests that certain people love to suffer like the figure Jesus Christ; is THAT the "passion of the Christ?" I'm genuinely curious. The wildly unnatural insistence on celibacy certainly, but paradoxically DOES seem to attract sexual deviants of all stripes. Hence the ghastly, ongoing litany of sexual abuse, particularly of children. Maybe you're not a mother, but how on earth does anyone square that grim reality with any reverence whatsoever? To call the Catholic church a pedophile ring is spot on. I guess you didn't see the movie "Spotlight" that won an Academy Award for exposing the truth.
When you speak of "changes required to get anywhere near Indigenous peoples' truth are massive," isn't that a massive understatement; aren't change and Catholic doctrine fundamentally at odds? The Discovery Doctrine is finally under review but it is from the fifteenth century!