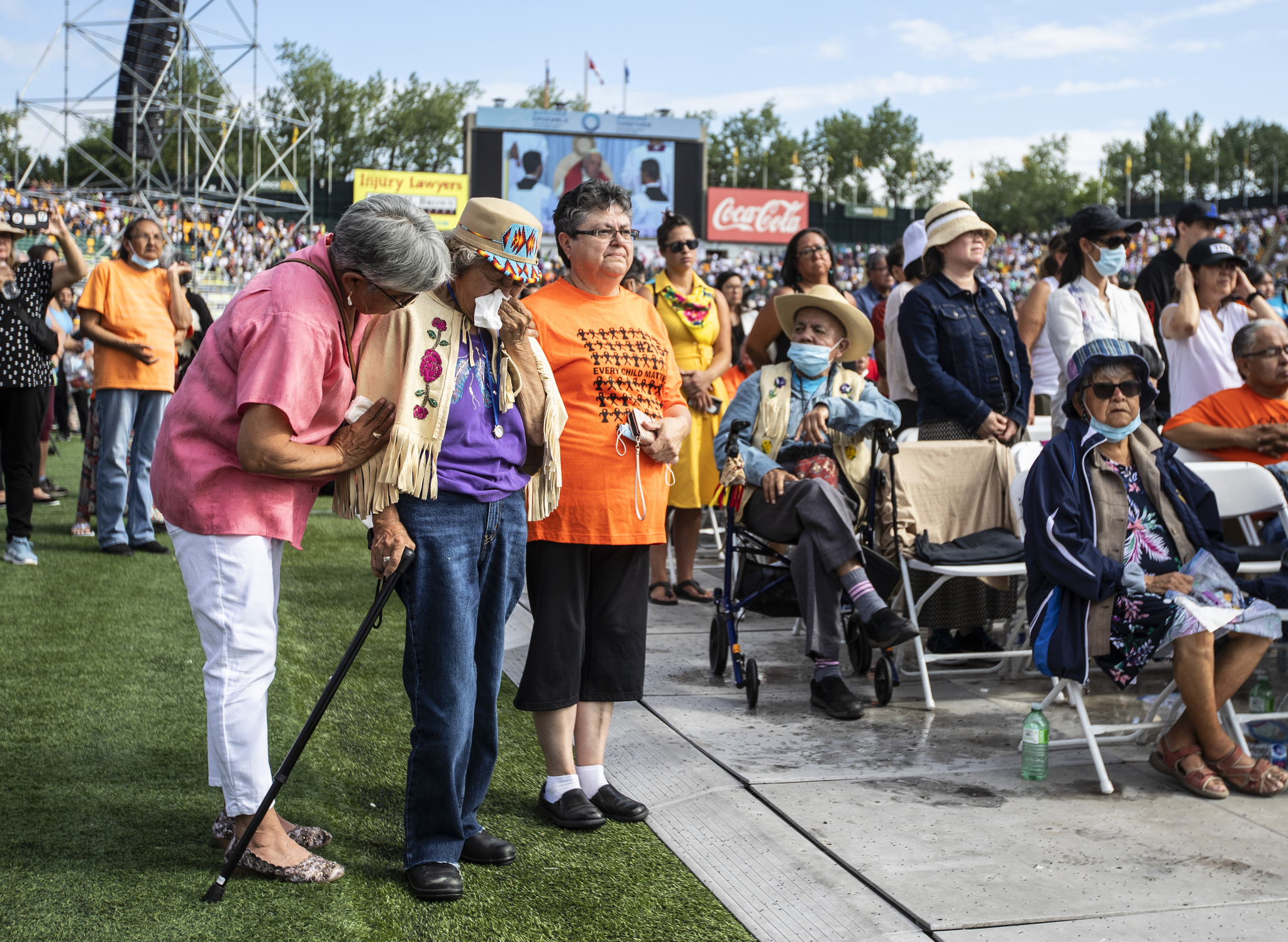 As 40 non-Indigenous Catholics from various Ottawa-area parishes gathered Tuesday to watch a livestream of the Pope’s open-air mass in Edmonton, the mood was solemn. But there was an element of hope, too, as many celebrated what they felt was his leadership in walking towards reconciliation.

Those taking in the event gathered at Holy Redeemer in Kanata, a suburb in the west end of Ottawa. A land acknowledgment kicked off the screening as a few orange shirts stood out amid the church.

The parishioners participated in the mass, singing, praying and clapping alongside the crowd in Edmonton.

“We’re trying to figure out how to follow this truth and reconciliation,” says Joan O’Connell, who sits on St. Joseph parish’s Indigenous Peoples committee. “There was a feeling of needing to be together.”

Pope Francis didn’t further his apology during the mass, but did touch on themes of his “pilgrimage of penance.”

It is "our spiritual duty to honour our grandparents and elders, to treasure their presence among us in order to create a better future," Francis said.

"A future in which the history of violence and marginalization of our Indigenous brothers and sisters is never repeated,” he continued.

The screening was organized by Anthony Ritchie, a non-Indigenous parishioner at Holy Redeemer. It was a culmination of a group effort by people from a network of parishes formed to do more collective work on reconciliation after the 215 unmarked graves were found in Kamloops in 2021.

“We realized we dropped the ball after the TRC [Truth and Reconciliation Commission’s report],” O’Connell says.

After finding the 215 unmarked graves, it became a priority to do something, so a series of events followed, including reflections, listening sessions, prayers, and training sessions with Kateri Native Ministry, a Catholic Indigenous organization that offers teaching activities to non-Indigenous advocates for change.

While the Pope led an open-air mass in Edmonton on Tuesday, non-Indigenous Catholic parishioners reflected on their part in reconciliation.

“We started with trying to educate our parishioners in terms of what actually transpired and to understand more of the history,” Ritchie says. “The history we never learned in school.”

With Kateri Native Ministry, the network organized a blanket exercise to help educate parishioners about the history of colonization and Indigenous Peoples.

“We’re trying to reach our parishioners and position them for a change of attitude and change of direction,” Ritchie says.

It will take time for people to understand the severity of the past and internalize the history, which Ritchie says, needs to happen before an action phase can begin.

Now there is hope that the apology will help foster a collaboration on reconciliation.

“We’re prepared to work together, as opposed to spending so much time positioning ourselves. I think we need to start holding hands and walking down a path together,” he says.

Ritchie acknowledges the apology’s importance, noting there was “a lot of integrity and sincerity” in the Pope’s words in Maskwacis, Alta., on Monday.

“I think not having an apology was a barrier, and you can debate about what words were said, but it can open the gates and be a real moment of transformation,” O’Connell says.

“I hope we don’t lose the moment that this visit has started.”

More than 150,000 Indigenous children were forced to attend state-funded institutions of assimilation from the 19th century to the 1970s. Over half were run by the Catholic Church, while the rest were run by other religious denominations.

Many Indigenous advocates are calling for the Pope to return cultural artifacts to communities, and to dismantle the Doctrine of Discovery, which originated in the 1400s and gave legal and moral justification for colonial dispossession.

“Driven by the Doctrine of Discovery and other Church beliefs and doctrines, Catholic leaders not only enabled the Government of Canada, but pushed it even further in its work to commit cultural genocide of Indigenous Peoples,” Murray Sinclair, former senator and chair of the Truth and Reconciliation Committee, said in a statement released Tuesday.

The doctrine has yet to be formally denounced or rescinded by the Catholic Church.

The Indian Residential Schools Resolution Health Support Program has set up a 24-hour hotline to help residential school survivors and their relatives suffering trauma invoked by past traumas or recent reports. The number is 1-866-925-4419.