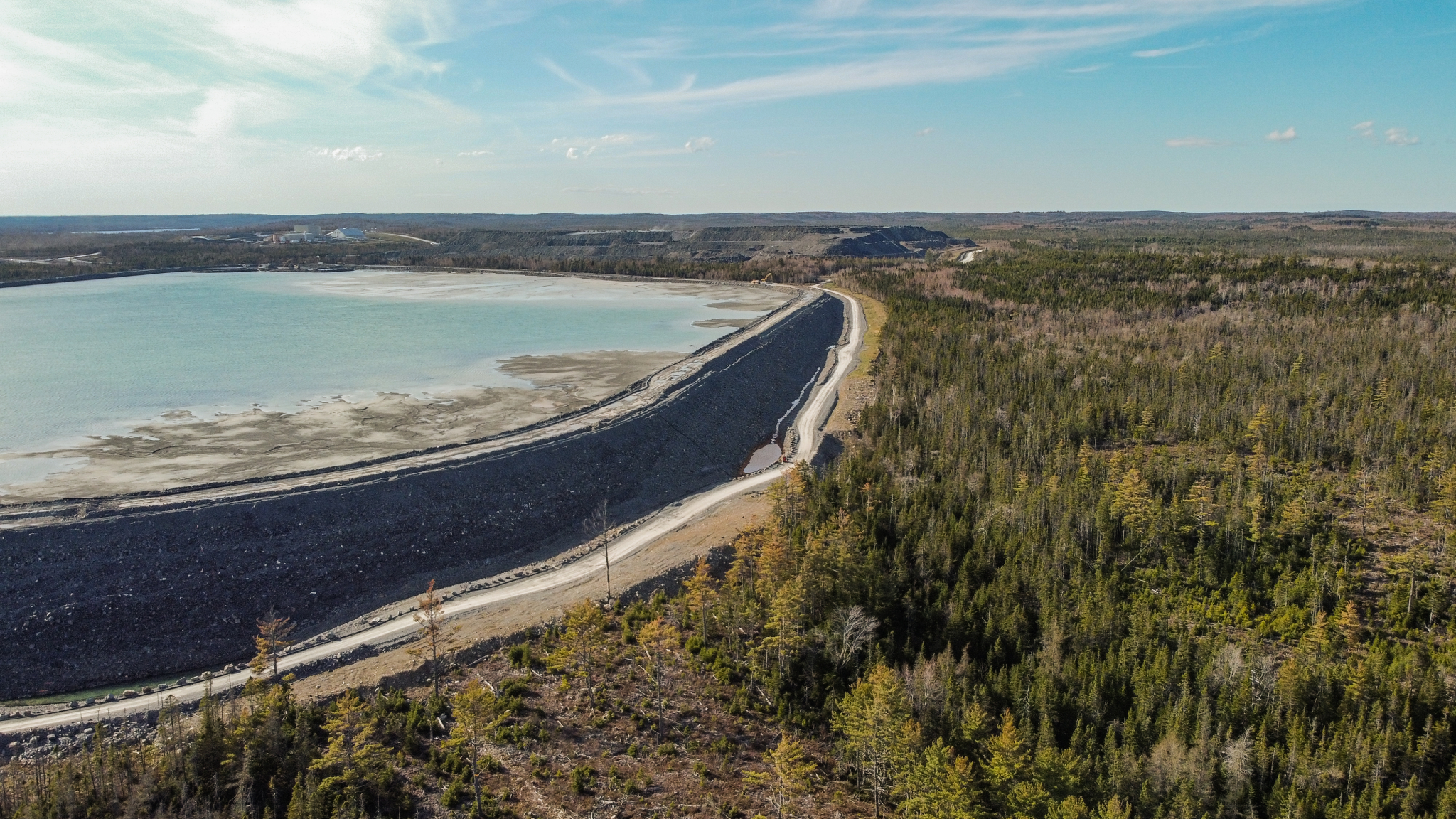 The tailings at Touquoy gold mine as seen from above. Photo courtesy of the Ecology Action Centre
Previous story
Next story

A pending decision from Nova Scotia's environment ministry could allow a contentious gold mine to pump more wastewater into its tailing ponds, raising alarm bells over what some critics call a lack of environmental scrutiny in the approval process.

The company behind the Touquoy open-pit gold mine in Moose River has asked the province for permission to raise the height of the dam wall surrounding its tailing ponds, which consist of watered-down waste from the mining process and contain heavy metal byproducts. This could allow Touquoy to store more mining waste and increase the likelihood of an accident, said Karen McKendry, wilderness outreach co-ordinator for the Ecology Action Centre.

She points to British Columbia’s Mount Polley disaster in 2014, when about 25 billion litres of mining waste spilled into nearby water sources from the copper and gold mine. Contaminants from the spill are still being documented in local invertebrates like mayflies.

There have already been compliance issues at the mine, which exacerbates concerns for McKendry.

Atlantic Mining NS Inc., which operates as Atlantic Gold in the province and owns the Touquoy open-pit mine, pleaded guilty in February to two charges: failing to test the quality of runoff water at Touquoy and failing to report those findings to authorities. Initially, 32 environmental infractions were filed against the company, but that number was reduced during the plea process. The company was ordered to pay $250,000 to the provincial and federal governments.

"The Company is working closely with provincial regulators on this application and, in so doing, has welcomed the opportunity to clarify application documents and address questions with Nova Scotia Environment and Climate Change, while following the robust environmental approvals process that supports this application," said the company in an emailed statement.

No date for decision, province says

Approval for certain mining activities, such as increasing the volume of tailings, doesn’t need to go through a formal environmental assessment process or a public comment period — which McKendry said is a huge flaw in the process.

Atlantic Mining NS Inc., which operates as Atlantic Gold in the province and owns the Touquoy open-pit mine, pleaded guilty in February to two charges: failing to test the quality of runoff water at Touquoy and failing to report those findings.

“The request and its respective review process raise major concerns with regards to safety and lack of transparency,” said McKendry.

“There are many examples of tailings dams failing. These breaches lead to toxic mining waste spilling out across nearby areas, resulting in the obliteration and contamination of watercourses, groundwater and wildlife, while jeopardizing the health and safety of people.”

The office of Nova Scotia’s Minister of the Environment and Climate Change Tim Halman confirmed Atlantic Gold has an application in for review but said there is no date for a decision.

As reported in the Guysborough Journal in late June, Atlantic Mining said if the height request isn’t approved, it could close operations and move to just maintaining the site as soon as mid-August. The company said its original plan has always been to make Touquoy into a storage site for tailings from other planned nearby operations including Beaver Dam, a project opposed by the local Mi’kmaw chief.

However, in the quarterly report of Australia's St. Barbara released this week, the company noted “senior executive relationships established with [the government], which has improved permitting pathways for Atlantic operations."

“It’s unclear as to the science and recommendations upon which Nova Scotia Environment and Climate Change will base their decision,” said McKendry.

“The tailings dam was not originally engineered to withstand the volume of mining waste now proposed, and the original 2008 environmental assessment for the mine did not evaluate or seek public input on these current plans. Nova Scotians need the minister of environment and climate change to do the right thing and protect Nova Scotians and our nature, and not bow to pressure tactics from the gold mining industry.”

This story has been updated to include comment from St. Barbara Atlantic Operations.

In Alberta we worry about the

In Alberta we worry about the huge tailings ponds from our in situ mining of bitumen, but it's nice to know gold mining is as hard on our water...and has no plans or technology to clean it up. So sure, let's build higher walls. Let's pretend that nature keeps everything in separate containers and a man made wall will be sufficient to keep contaminated water from entering ground water, or leaking into nearby rivers, to be distributed downstream.

Gold is certainly more important than water. Gold buys all the bottled water a rich man needs. Besides, who lives up there anyway?

Which brings me to reconciliation...and the institutions that hoard money while promising pie in the sky when you die. Or a good job in some rip and ship foreign corporation while on your earthly journey.

The Great Mother grows weary of us. |Where is it written, Fire Next Time?