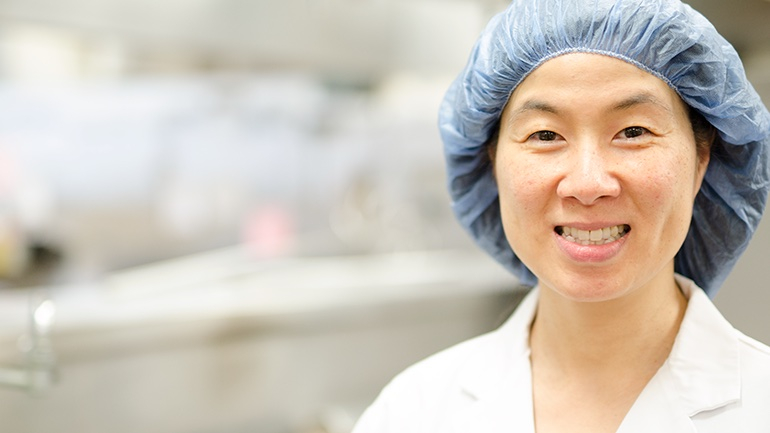 Ask most people about the hospital food they've eaten, and they will tell you how they would prefer to forget the lukewarm soup and cardboard toast that fed them during an uncomfortable time in their life.

Not Elaine Chu, the regional manager of food operations at B.C.'s Royal Columbian and Eagle Ridge hospitals. A quick question about the food served at Royal Columbian leads to impassioned descriptions of how tasty the falafels, plant-based chicken and cucumber tomato salad the institution recently put on its menu are.

The new dishes are part of an effort spearheaded by Chu to reduce the environmental impacts of food eaten at the 490-bed hospital, one of the busiest in B.C.

Health care is responsible for about 4.6 per cent of Canada's greenhouse gas emissions, and many of these emissions can be traced back to waste from food and a reliance on single-use plastic items, according to the Canadian Medical Association Journal.

Canadian hospitals have traditionally put meat — the largest source of emissions from food — at the heart of their menus. Single-use plastics have also become increasingly common in hospital food service since the 1950s, with plastic plates and cutlery dominating patients' food trays. In addition to being an important source of pollution, single-use plastics is a key area of growth for the fossil fuel industry, making them a significant contributor to climate change.

The issue was driven home for Chu during the unprecedented heat wave and floods that slammed B.C. in 2021, events exacerbated by climate change. The twin crises were "an awakening," pushing her to find ways to make the food cooked and served at the hospital more sustainable.

She set her sights on reducing plastic and using more plants. Working alongside units in the hospital that were also looking to reduce their environmental footprints, she started replacing the single-use plastic spoons with reusable metal ones. She estimates that initiative alone will likely have saved at least 30,000 spoons a year, and showed how much plastic waste could be eliminated by a wholesale transition to reusable cutlery.

The initiative is almost a reversal to older hospital practices: Until the 1950s, hospitals relied heavily on reusable items, from cutlery to surgical instruments to masks. Single-use plastic replacements only started becoming common in the 1960s after American plastic manufacturers convinced some hospital administrators to build hospitals that relied heavily on disposable plastic.

Chu also tried to reduce the hospital kitchen's impact by encouraging her team to develop plant-based recipes that were tasty and nutritious enough to go on the hospital's default menu. Vegetarian and vegan options have always been available, she said, but patients who wanted them needed to put in special requests. With the new menu, all patients will be able to pick a meatless meal.

Health care is responsible for about 4.6 per cent of Canada's greenhouse gas emissions, and many of these emissions can be traced back to food waste and a reliance on single-use plastic items, according to the Canadian Medical Association Journal.

The team developed several possible meals, then had close to 750 hospital staff taste-test them to figure out which ones were most popular. Two meals — falafels with hummus and cucumber salad, and plant-based chicken tenders — made the cut. They have since been included on a new menu that's being tried out on three of the hospital's units.

Chu said patients have largely appreciated the new meatless options. She's also received positive feedback from staff at her hospital and others in the region. And the key to success?

"It has to taste good, plant-based or not."

Wildfire smoke is bad for you. Now think about the cows

The dietary area is not the

The dietary area is not the only hospital department that uses single use plastics. I am a medical laboratory professional and we were taught about all the various grades of glass and which types were best for what purpose. Go ahead twenty years and now all pipettes are plastic and discarded after one use. Pipettes in Blood Banking, which to begin with were glass and calibrated precisely to deliver a certain number of drops to the milliliter are now plastic. Microbiology agar plates are plastic and discarded with bacteria still growing on them into the garbage. I was told all these plastic disposable items were sent to somewhere in the USA to be incinerated. Plastic fumes are very toxic. Where is the sense in this.? Short term gains for long term very real problems.

Not only that, but plastic

Not only that, but plastic lab hardware has "leaked" substances such as hormone mimickers, that unbeknownst to the researchers, became part of the activity within, say, the test tube.