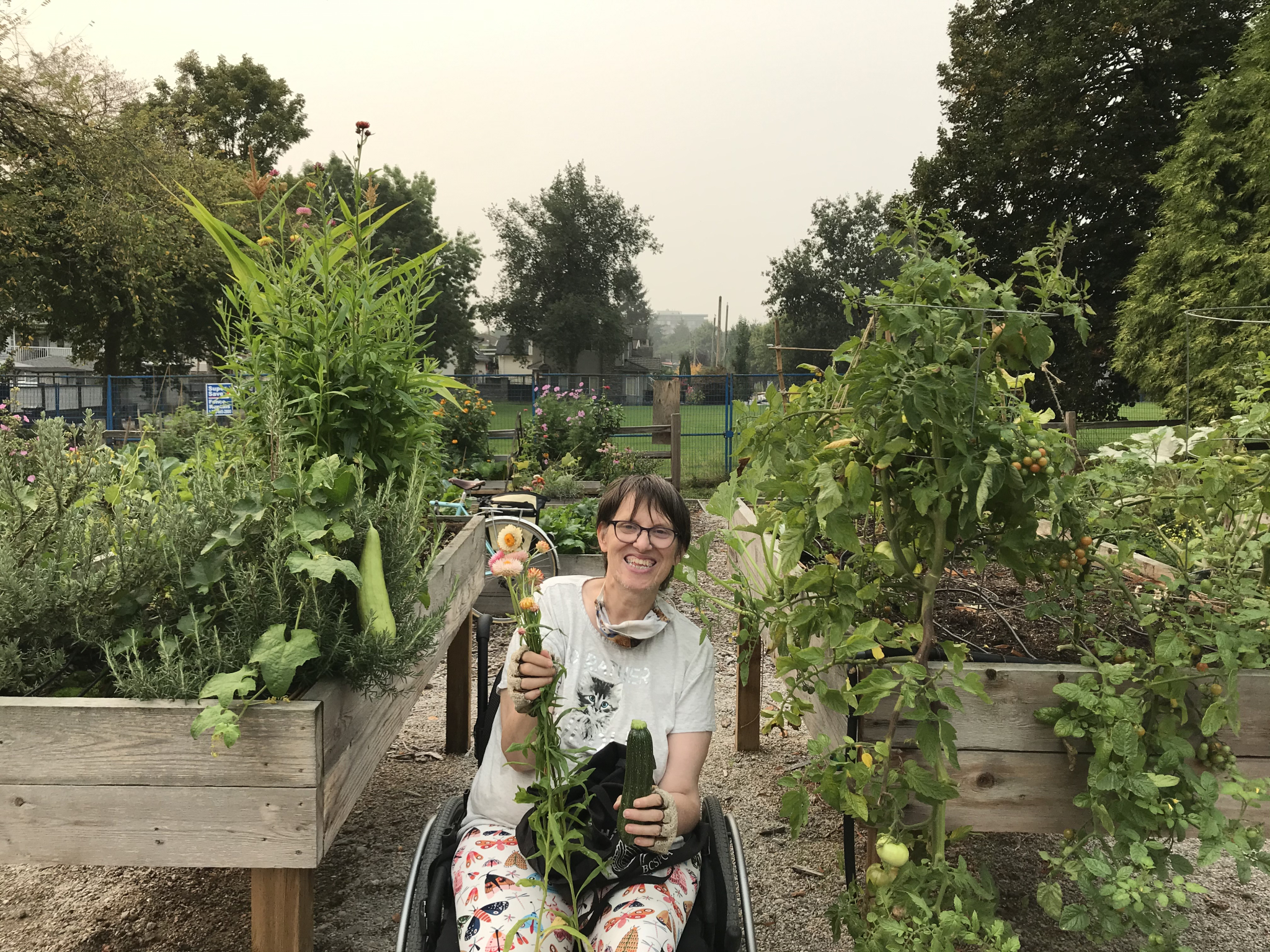 Elizabeth Perron has been gardening with the Disabled Independent Gardeners Association for three years. Photo by Shareen Pasco
Previous story

Elizabeth Perron and her husband have been growing vegetables in a community garden in East Vancouver for three years. They have a number of crops: kale, carrots, tomatoes, beets and cucamelons. This abundance of fresh food is what draws Perron to gardening. She also loves that it's an opportunity to spend time outdoors.

Both Perron and her husband have disabilities and are in wheelchairs, so to grow this produce, they need garden beds that are accessible. This means having raised beds that they can work in while in their wheelchairs, a flat surface they can roll on, and enough space between each plot.

They have support from an organization called the Disabled Independent Gardeners Association (DIGA), which, among other things, aids gardeners by matching them with a volunteer to help them with tasks they can’t do.

Disabilities are diverse, and DIGA tries to accommodate however it can. It has plots at different heights to consider the different levels of wheelchairs. Others are similar to a table or desk, so the gardener can sit under it while working in the soil above. DIGA also has to consider the ground, which needs to be compact for wheelchairs to move over. For those who are quadriplegic and can’t do any gardening tasks themselves, they can direct volunteers on what they want them to do.

“Gardening is just so healing and nourishing in so many different ways, like mentally, physically. And anyone should be able to garden,” Shareen Pasco, DIGA’s program co-ordinator, said.

In 2011, the City of Vancouver released community garden guidelines that stated at least five per cent of plots should have raised beds to be wheelchair accessible, with a target of 10 to 20 per cent. A spokesperson told Canada’s National Observer the city does not have data on what percentage of garden plots are now wheelchair accessible, but said that at many of the newer community gardens, one-third to 100 per cent of garden plots have raised beds.

But people with disabilities need different kinds of support. Sarah Wenman, who is the therapeutic garden co-ordinator at an urban farm called Farmers on 57 in South Vancouver, runs a program that enables residents of the George Pearson assisted living facility — all of whom are in wheelchairs — to garden. Even there, with its 30 wheelchair-accessible beds, lightweight tools and volunteers to help residents garden, Wenman stressed they don’t have resources to help everyone.

“Accessibility is not any one thing because, of course, it could be visual impairment or even cognitive impairment or people's sensory levels, there’s a lot for accessibility. So I can't say that we cover everything.”

Raising beds, having wide paths, and sturdy ground are all things that support wheelchair access in community gardens.

How farmers are helping survey native pollinators on Vancouver Island