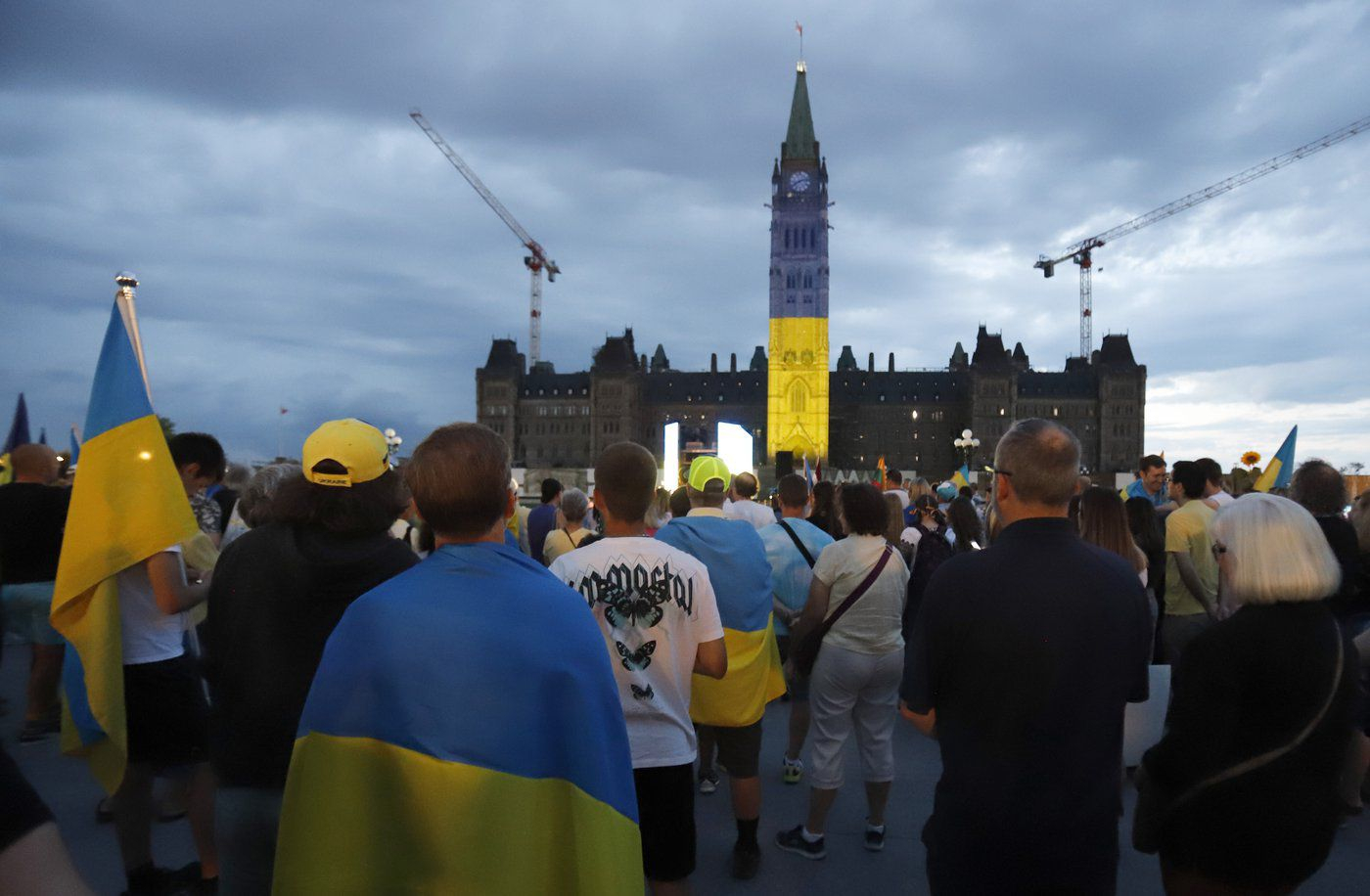 The Parliament Buildings are illuminated in the colors of the Ukraine flag as people take part in Ukrainian Independence Day celebrations on Parliament Hill in Ottawa on Wednesday, August 24, 2022. Photo by The Canadian Press/ Patrick Doyle
Previous story
Next story

Parliament was lit in blue and yellow Wednesday evening as a crowd of several hundred people, many wearing the same colour, marked Ukrainian Independence Day.

Wrapped in the flag of her homeland, Yevheniia Rimikhnova listened as Canadian politicians and diplomats from neighbouring Baltic countries praised the courage of Ukrainians in the face of the Russian invasion, which began six months ago.

"The first two months were just in darkness," Rimikhnova said.

"When you go back to those things that happened, you feel strange. You feel nauseous."

The 22-year-old lived her entire life until this year in a liberated Ukraine, which declared independence from the crumbling Soviet Union on Aug. 24, 1991.

But for the last four months she's has been in Ottawa.

"We made a decision to leave our home when we heard a plane crashing in the sky one kilometer away from our home, and we realized that the building that was crushed because of that plane could be our house."

The trip out of the capital city of Kyiv took five days. Travel at night was too dangerous. They spent nights in unfamiliar villages, staying with strangers who opened their homes.

"It's much better than some people had to go through," she said.

Her parents remain in Kyiv, because Ukrainian men aren't allowed to flee as the war rages on. Her younger twin sisters already had temporary work permits in the United States, but they plan to join her in a month.

Until then, she's working to establish a temporary life In Canada. She's working through the trauma. "It's a little bit lonely."

On Parliament Hill on Wednesday, surrounded by Ukrainians and Ukrainian Canadians singing the national anthem, it was a little less lonely.

Canada was the first Western country to recognize Ukraine's independence in 1991. The first Ukrainian bank notes after independence were printed in Canada and Canadian legal experts helped draft the country's constitution.

Canada now has the second largest Ukrainian population in the world, with large communities throughout the country, including in Saskatchewan.

Another rally was held earlier in the day at a park in Saskatoon.

Tetyana Lemon, a teacher at Bishop Filevich Ukrainian bilingual school, said Independence Day is a "reminder to the world of the resilience of Ukrainians, their sacrifices and their desire to preserve freedom and peace."

As some of the 1.4 million Ukrainian Canadians celebrated and mourned what has been lost, Prime Minister Justin Trudeau led the tributes to its "bravery," saying the "bonds uniting our peoples are unbreakable."

Solidarity came from across the country.

"As Ukrainians fight to defend their independence today, know that Saskatchewan stands with you," said Saskatchewan Premier Scott Moe.

In the last six months, Ontario has welcomed more than 25,000 Ukrainians.

"The bond between Ukraine and Ontario has been strong for many decades and will continue to grow stronger," he said.

The event in Toronto included a charity auction to raise money for ambulances and evacuation vehicles in the embattled country.

Among the items set to be auctioned is a piece of a Russian missile that destroyed a training base near the Polish border.

Weeks before the missile struck, killing 43 people, Canadian personnel had been training Ukrainian soldiers at the base.

Ambassador Yulia Kovaliv started a multimedia exhibition at the event in Toronto featuring footage of Ukrainians defending their country on the front lines.

In an interview, the ambassador said she takes photos of blue and yellow signs supporting Ukraine in Canada, as well as flags flying in cities throughout the country, and sends them back to friends in Ukraine to illustrate Canadian support.

"It is really amazing how we all join together to resist aggression and stand for what is right," she said, adding that Ukraine is "very grateful" for Canada's financial support, which has exceeded $1.87 billion.

Many of those who spoke to the crowd in Ottawa on Wednesday expressed their firm belief that Ukraine will win the war.

Ukrainian President Volodymyr Zelenskyy reported that 22 people were killed Wednesday in a Russian missile strike on a train station.

Rimikhnova saw the news, and immediately thought of her father, who was supposed to be on a train to Kyiv. She texted her family group chat and learned he is safe for another day.

This report by The Canadian Press was first published Aug. 24, 2022.