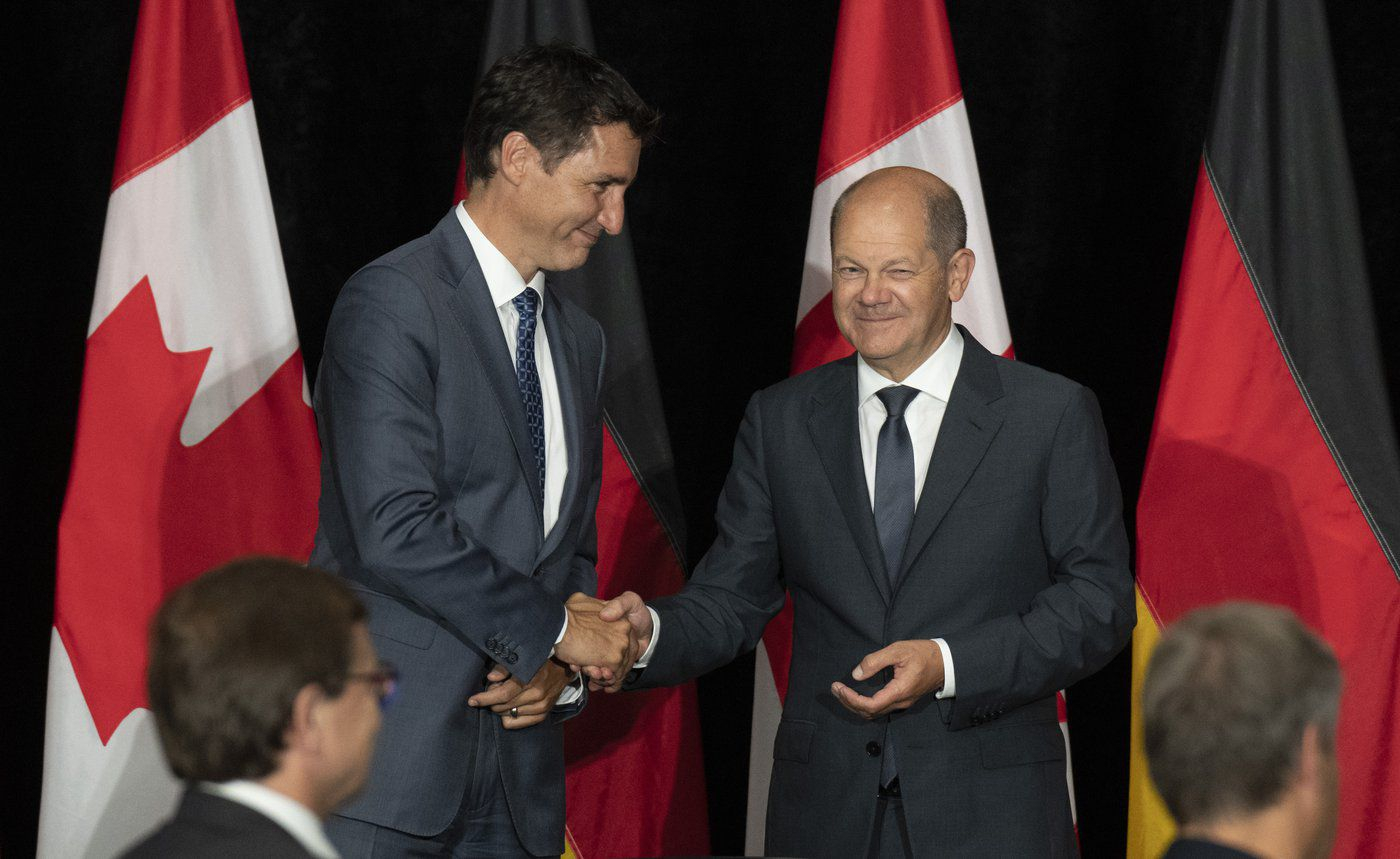 Justin Trudeau and Olaf Scholz shake hands at the start of a signing ceremony after signing a deal to kick-start a transatlantic hydrogen supply chain, on Aug. 23, 2022 in Stephenville, N.L. File Photo by The Canadian Press/Adrian Wyld
Previous story
Next story

The Canada-Germany hydrogen pact sends a positive signal about the future of the industry, but its short timeline seems "difficult" given how long it is taking to get smaller projects running within Canada, a transit advocacy groups warns.

The agreement, signed Tuesday, says the first hydrogen shipments could feasibly begin by 2025 even though none of the hydrogen facilities are even under construction yet.

Josipa Petrunic, president of the Canadian Urban Transit Research and Innovation Consortium, said in an interview that an attempt to ship green hydrogen from an Enbridge facility in Markham, Ont., just 100 kilometres to be used in hydrogen buses in Mississauga is now passing the five-year mark.

"So when we look at a memorandum declaration that says we're going to build a production plant in Newfoundland, and build the supply chain all the way to Germany (in three years), we can't even get hydrogen from Markham to Mississauga after five years," she said.

In both cases, the hydrogen in question is in the "green" category — made by splitting water molecules apart using electrolyzers powered by renewable, or mostly renewable, energy.

And the biggest barrier to that is cost, said Petrunic.

Her organization is working with Mississauga's transit system, known as MiWay, to start a pilot project to power 10 hydrogen-fuel-cell buses, with an estimated cost of about $30 million.

MiWay is able to put about $10 million toward the pilot. It has applied for another $11 million through the federal Zero-Emission Transit Fund, and is turning to Ontario for the rest. Neither the federal nor Ontario contributions have been approved.

The price of hydrogen is directly tied to the price of electricity, and won't start to come down until economies of scale begin to take effect.

The United States is investing heavily in hydrogen through its Inflation Reduction Act, which Petrunic said will eventually drive down the price.

But in the meantime, municipal transit systems are grappling with cutting out diesel buses and deciding between hydrogen and electric as they aim to eliminate greenhouse gas emissions.

Initial hydrogen projects are failing to leave the bus depots without government funding. In Winnipeg, the transit system is trying to put its own electrolyzer in place to make hydrogen for some buses.

Petrunic said a more co-ordinated approach is needed from all levels of government to compensate for the price difference between diesel and hydrogen until that gap is closed.

A spokeswoman for Ontario Transport Minister Caroline Mulroney said the provincial government was looking into the issue but couldn't provide a response Thursday.

A federal official, speaking on background because he wasn't authorized to speak publicly, told The Canadian Press it does seem impossible that hydrogen will be shipped to Europe in three years when a small domestic project hasn't been successful in five.

But he said the intent is to respond to a global political and energy security crisis, and the hope is that it will also help kick-start production for domestic use at the same time.

Wilkinson said most of the hydrogen discussions nationally and internationally were looking much further in the future until Russian President Vladimir Putin invaded Ukraine and upended global energy security.

Everything is now being fast-tracked, he said.

There are some differences between the transit projects and the Germany agreement, including big provincial government backing of the hydrogen transformation among Atlantic premiers. All four were there to witness the agreement signing Tuesday and also signed a separate document promising to work together to help accelerate the projects.

Green hydrogen projects will only succeed with pure-play hydrogen producers, or when public-private partnerships exclude fossil companies. For example, look south at US. Soon after the massive $3/kg tax credit for green hydrogen in the IRA climate bill passed in Aug 2022, both Walmart and Amazon have announced mega projects for producing green hydrogen by 2025, with Plug Power (the biggest North America company in green hydrogen sector).