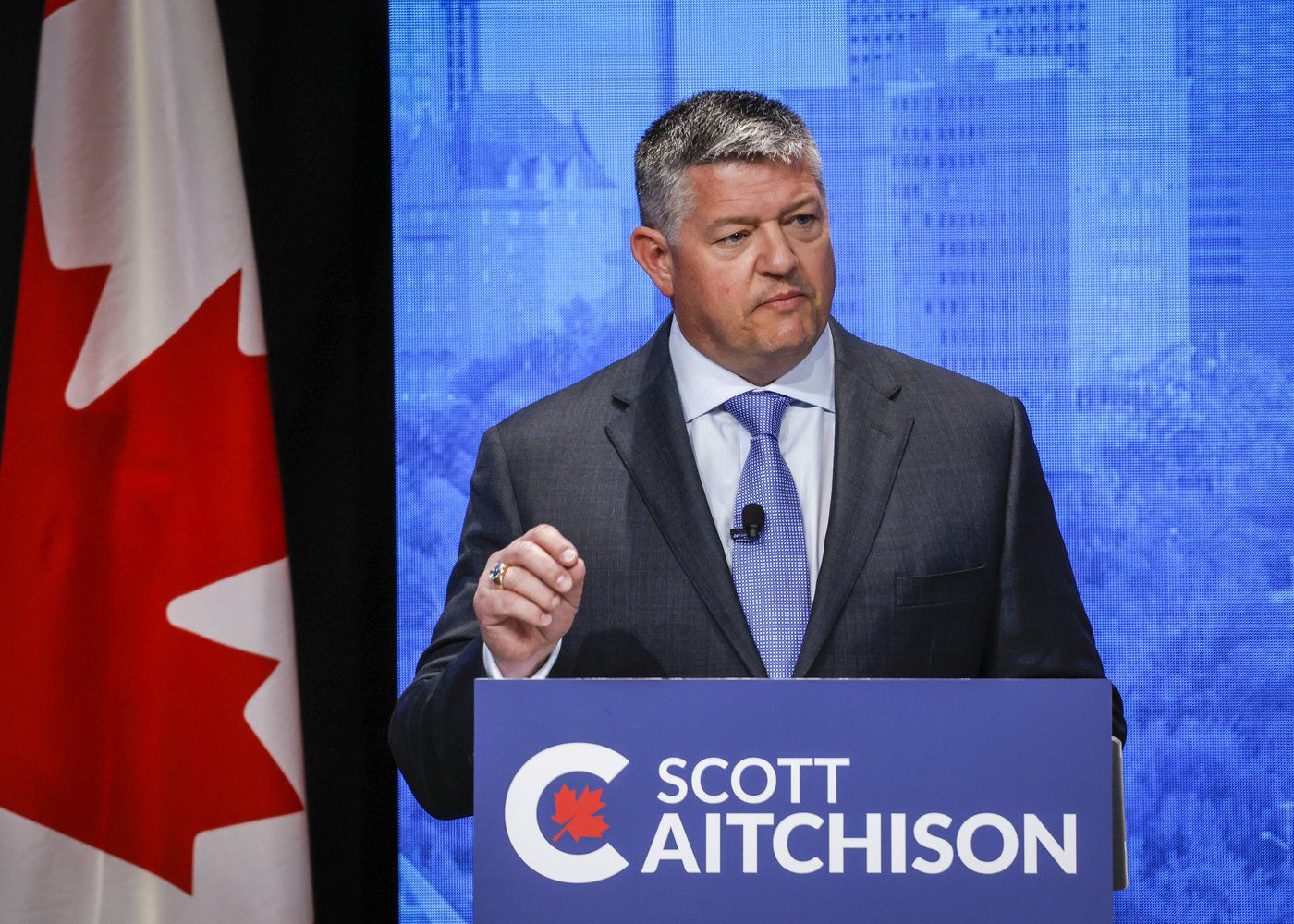 Candidate Scott Aitchison makes a point at the Conservative Party of Canada English leadership debate in Edmonton, Alta., on Wednesday, May 11, 2022. File photo by The Canadian Press/Jeff McIntosh
Previous story
Next story

Conservative party leadership candidate Scott Aitchison is condemning Leslyn Lewis' message to members last week about the Nuremberg Code and medical experimentation as nothing but a "dog whistle" to COVID-19 vaccine critics.

Aitchison made the comments in a missive sent to party members Thursday, with less than two weeks before they must return their ballots for a new leader by the Sept. 6 deadline.

Aitchison, an MP first elected for the party in 2019 and again last year, entered the leadership race as a largely unknown figure.

Throughout the race, the rural Ontario representative has campaigned on a message of restoring decency in politics at a time when leaders of different stripes have been accused of stoking division.

He referred to those values in Thursday's message, saying he has heard from Canadians who were confused and "appalled" at the comparison Lewis drew between contemporary issues and the Holocaust.

In her message, Lewis provided a timeline of moments in history when humans have been subjected to experimentation, including some Indigenous children in residential schools who were malnourished.

She wrote that, "even in modern times the tenets of informed consent and voluntary participation in scientific experiments can be easily undermined by even our modern governments."

Although Lewis didn't mention COVID-19 in last week's note about the Nuremberg Code — a set of research guidelines established after the Second World War, when Nazi doctors carried out inhumane experiments on prisoners — Aitchison says some opposed to COVID-19 immunizations have compared vaccine mandates to the horrors of Nazi Germany.

"Leslyn’s email was a dog whistle to these people so loud that it sounds more like a freight train’s horn," Aitchison said.

"Let me be clear — being offered a vaccine that prevents serious illness and our governments’ responses to this pandemic are not the same as being tortured in a Nazi concentration camp."

Lewis responded to Aitchison's condemnation in a statement pointing out how her initial message never mentioned COVID-19. She went on to accuse her colleague of attacking her publicly, saying "he diminished my existence as a Black woman who has endured racism, and rose above it all."

"I understand that some people were shocked by the fact that I was willing to point out how governments throughout history have broken the Nuremberg Code, including right here in Canada," Lewis said.

"I had a few caucus colleagues who had questions about my letter. They contacted me directly, and we discussed it," she said, adding that "we came away with a greater understanding of the other's thoughts."

Aitchison, in his message to members, also touched on a recent decision by the Liberal government to back away from a group hired to do anti-racism work after The Canadian Press reported one of its consultants had sent tweets about “Jewish white supremacists.”

Many Conservative MPs have roundly criticized the government, questioning what kind of vetting occurred.

"If we want to actually deliver on the promise of better government, we as a party must do better as well," Aitchison said.

Lewis entered the contest to become party leader as a sitting MP who placed third in the 2020 leadership race.

Like in the first race, she once again enjoys the backing of the social conservative wing of the party, a segment of the base that is highly motivated to purchase memberships and elect a leader who opposes abortion — which Lewis does.

This time around, however, Lewis has also championed opposition to COVID-19 health measures as well as global entities like the World Economic Forum, the United Nations and the World Health Organization

Lewis has been criticized for playing into conspiracy theories — which some in the party worry have been spreading — to make political gain. For her part, Lewis has defended raising such issues by saying it's what she hears when she talks to Canadians, whose views should not be dismissed.

In May, Aitchison raised concerns about the prevalence of conspiracy theories in the party during a debate in Ottawa, hosted by the Canada Strong and Free Network, an organization that advocates for the conservative movement.

"Every time I hear a Conservative talking about some conspiracy theory, I realize that there's another group of swing voters in the (Greater Toronto Area) that just are not going to come our way," he told the audience at the time.

‘Everything that’s in there is dead’

Regarding conspiracy "theories" "Lewis has defended raising such issues by saying it's what she hears when she talks to Canadians, whose views should not be dismissed."
Presumably because everything one hears should be given equivalence to everything else one hears.
Good grief. That's what passes for leadership these days?