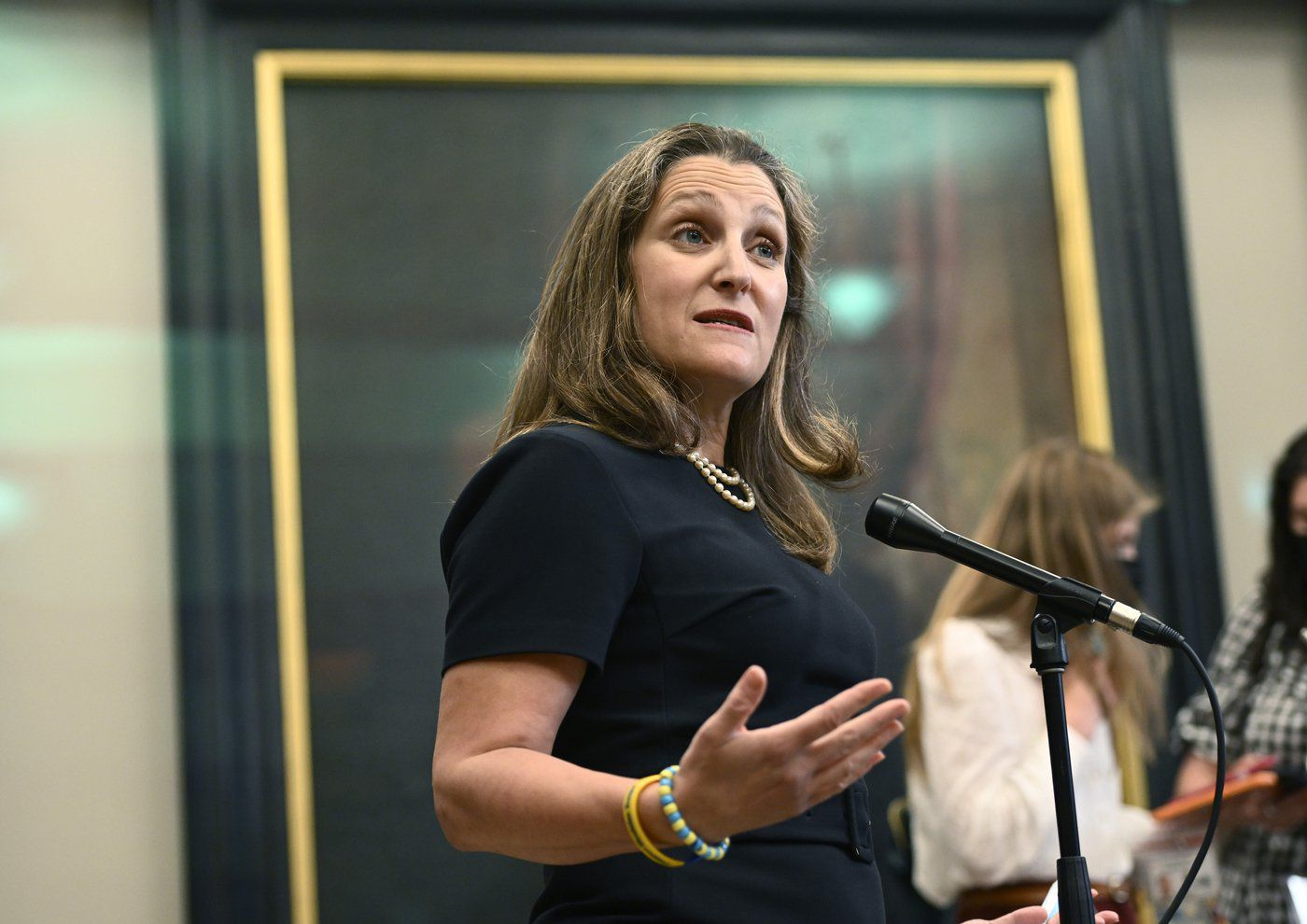 Deputy Prime Minister and Minister of Finance Chrystia Freeland speaks to reporters before heading to Question Period in the House of Commons on Parliament Hill in Ottawa on Thursday, June 23, 2022. File photo by The Canadian Press/Justin Tang
Previous story

Prime Minister Justin Trudeau called for political leaders to take a united stance against threats of violence and intimidation on Sunday, days after his deputy was confronted in Alberta by a man who repeatedly yelled profanity at her and called her a traitor.

A video circulating online over the weekend shows Finance Minister Chrystia Freeland arriving inside City Hall in Grande Prairie, Alta., on Friday, and then being confronted by the man while she approached and entered an elevator.

Trudeau addressed the incident during an announcement in Ottawa on funding for an action plan to support LGBTQ communities. He said what Freeland faced isn’t isolated and is being seen with increasing frequency by people in public life, particularly women and minorities.

"Threats, violence, intimidation of any kind, are always unacceptable and this kind of cowardly behaviour threatens and undermines our democracy and our values and openness and respect upon which Canada was built," Trudeau said.

The incident has prompted current and former politicians from across the spectrum to denounce the incident and speak out against harassment faced by public figures.

The identity of the man in the video has been circulating widely online, but efforts by The Canadian Press to reach him have been unsuccessful so far.

Trudeau characterized the confrontation as a "backlash" of a type that has been growing on social media for many years, where any time a woman speaks up on social media, she becomes subject to harassment and toxicity that reaches a point where her voice and her right to free expression are diminished.

"As leaders, we need to call this out and take a united stance against it, because no matter who you are, who you love, the colour of your skin, how you pray, where you’re from, your gender, you deserve respect," he said. "You deserve to live in peace without fear of threats of violence."

Calgary Mayor Jyoti Gondek agreed what happened to Freeland isn’t isolated. In a series of Twitter posts shared on Sunday, she recounted numerous incidents in which she said she was fearful.

In one incident during a campaign in 2017, she said she got a phone call from a man who said he knew where she lived and she should "watch out."

1/I have been asked by some people why I haven’t made a public statement about the assault on our Deputy Prime Minister. To be blunt, I had to sit with my thoughts for a couple of days. Because this incident is not isolated & it brings up too much pain. And fear. Yes, fear.

"In an open area packed with people, he loomed over me to hiss that he had made that call & he would make sure I lost the election. He then sat in the front row leering at me for the whole event."

Gondek also said protesters came to her home in January to air grievances over public health measures related to the COVID−19 pandemic. She said they stood on her driveway, but she didn’t realize they were there until she opened the garage door, sending them scurrying to the street.

Gondek said her mother was with her at the time, adding they quickly closed the door and went back inside.

"My mum still looks out to the driveway nervously every time we have to drive somewhere," Gondek wrote.

Grande Prairie Mayor Jackie Clayton said in a video posted online Saturday that the incident with Freeland was "a disgusting display of hatred and abuse." She expressed gratitude for municipal staff who "calmly de−escalated the situation and acted in a highly professional manner despite the stressful circumstance."

"The confrontation at city hall captured on video does not reflect the welcoming spirit our region is known for. We do not need to agree on every issue to treat each other with basic respect," Clayton said.

"No one should be subjected to abusive behaviour."

This report by The Canadian Press was first published Aug. 28, 2022.