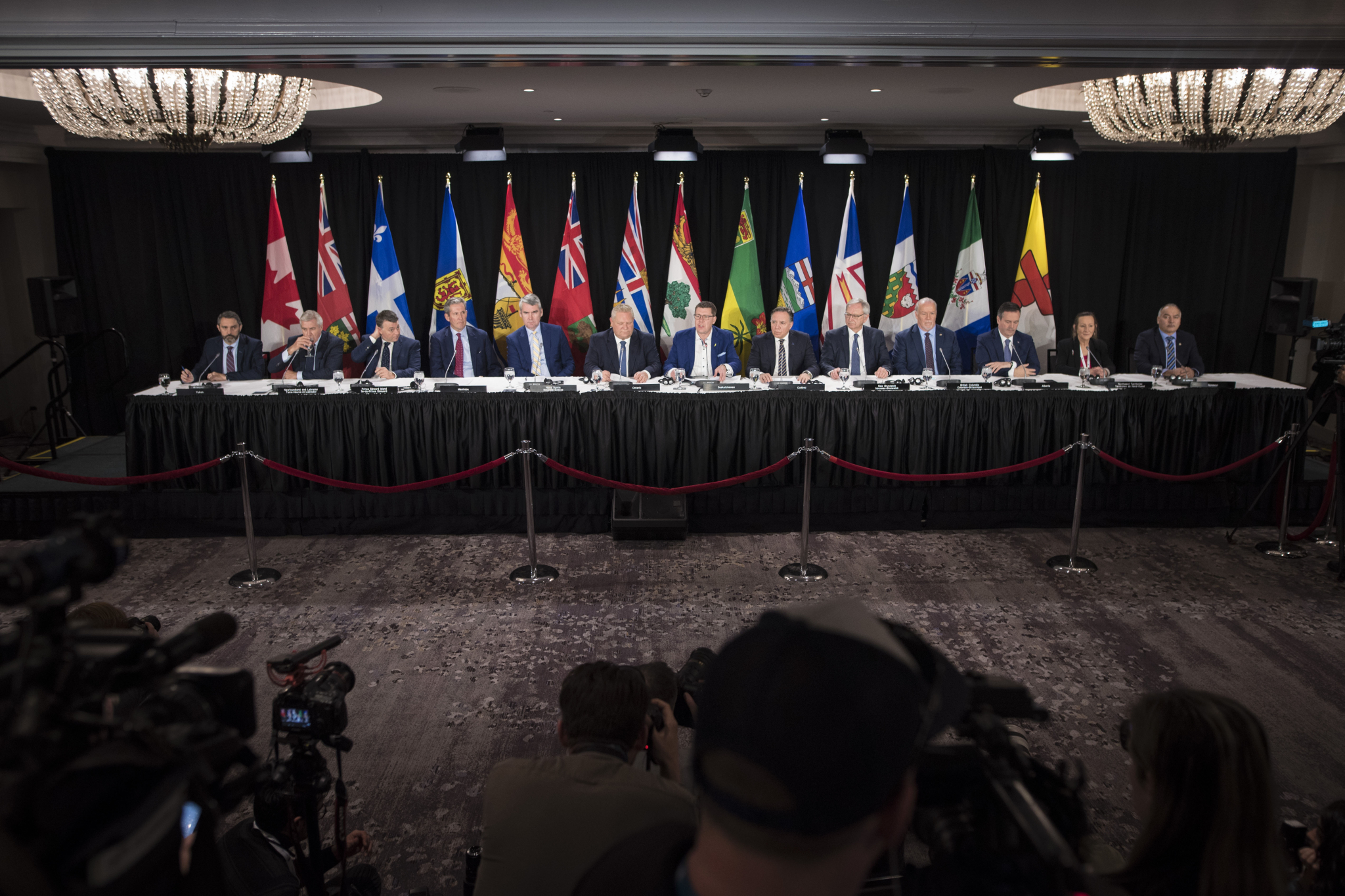 Premiers photographed at a news conference following a meeting in Toronto on Monday, December 2, 2019. The federal Liberals are threatened by the disappearance of its provincial cousins, writes Andrew Perez. Photo by Tijana Martin/ National Observer
Previous story

Justin Trudeau has yet to reach seven years as prime minister.

Yet to listen to much of the commentary today, one would think he’s approaching his father’s 15-year tenure as PM. Since he earned his third mandate less than a year ago, Trudeau’s government has been besieged by a seemingly never-ending series of crises: the “Freedom Convoy” and its deadly aftermath; an unprecedented war in Ukraine; an affordability crisis fuelled by 40-year record inflation levels; and mayhem at Canada’s airports and passport offices.

But much of this talk is divorced from the reality that voters likely won’t have the opportunity to weigh in on this government’s performance until 2024-25.

That’s not to suggest Trudeau and his government will be more popular come that time. That’s unlikely for an administration approaching the 10-year mark, but it’s equally unlikely that jaw-dropping inflation levels and COVID-fuelled chaos at airports and passport offices will remain front-page stories in 2024 and 2025.

As it looks ahead to securing a fourth mandate, the Liberal Party of Canada confronts a more permanent sort of challenge that is arguably direr: the existential threat provincial Liberal parties face west of Atlantic Canada.

Seven years later, the composition of provincial governments has changed dramatically. More concerning, Liberal parties in Canada’s two most-populous provinces — both in power when Trudeau won big in 2015 — have plunged into prolonged tailspins. Not to mention the almost non-existent Liberal party organizations in Manitoba, Saskatchewan and Alberta.

Comparing the federal Liberal party to provincial parties that bear its name can be problematic, especially in Quebec and B.C., where provincial Liberal parties are coalitions that have traditionally attracted federal Liberal and Conservative support. Nonetheless, in Quebec, until the rise of Premier Francois Legault’s wildly popular Coalition Avenir Quebec (CAQ) administration, most federal Liberals supported the Quebec Liberal Party under former premiers Jean Charest and Philippe Couillard.

That’s no longer the case. More alarming, it’s not seen as possible in the near- to medium-term.

The cold reality is that since 2018, the provincial Liberal parties in Quebec and Ontario have been hollowed out to the point where they now suffer from skeletal organizations that risk sabotaging the federal party’s electoral prospects.

After governing for nearly 15 years, the Quebec Liberal Party now finds itself in a prolonged funk. It’s widely believed that Legault and his CAQ government are certain to win a second majority on Oct. 3 when Quebecers head to the polls to render their verdict on the upstart party that swept to power in 2018, relegating the once formidable Quebec Liberals to the Opposition benches.

The latest data from 338Canada, a model that combines opinion polls and demographic data, has the CAQ winning an average of 98 of the national assembly’s 125 seats, with the potential to win as many as 108 ridings. These projections are extremely worrisome for Quebec Liberals: a party that has governed the province for much of its history since Confederation.

In early August, a Leger poll found the party ranked a distant second, 26 points behind the governing CAQ. As recently as 2020, the party had much higher hopes for its prospects when it crowned Dominique Anglade as leader in a historic move.

Anglade is the first Black woman to lead a provincial political party in the history of Quebec and the first woman to have run for the party’s leadership in its 150-year history. But in spite of her trailblazer status, Quebec Liberals face dismal prospects.

Among francophones, who account for 80 per cent of Quebec’s population, Liberals stand dead last among all parties with only 10 per cent support, falling behind the left-wing Quebec solidaire, Parti Québécois and even the province’s new Conservative Party.

Trudeau’s Liberals won an impressive 35 seats in la belle province less than a year ago, with several of these ridings secured in francophone Quebec. But the federal party’s ability to win a plurality of Quebec seats in future elections will be in jeopardy if the provincial party is obliterated this fall.

In June, the Ontario Liberal Party faced its second electoral drubbing in four years, finishing a distant third in the seat count at Queen’s Park. While the Liberals did manage to tie the NDP in the popular vote, they failed to secure party status for a second consecutive election, leading to calamitous consequences: a loss of taxpayer-funded staff and resources to hold Doug Ford’s government to account and a potentially divisive leadership race ahead for a battered party.

Ontario has long been an electoral bastion for the federal Liberals. Trudeau’s team built its three back-to-back victories around taking the majority of the province’s seats and virtually sweeping urban and suburban Ontario. But nearing a decade in power and a provincial party that is once again in tatters, these remarkable wins could be difficult to replicate in future elections.

The federal and provincial Liberal parties have historically been closely tied, drawing on many of the same organizers, donors and campaign volunteers. This has been especially true over the past 15 years as both parties increasingly integrated their organizational and fundraising arms, often hiring the same staff. For example, during the 2015 federal election, Trudeau’s most senior strategists — Gerald Butts, David McNaughton and Katie Telford — all played pivotal roles in Dalton McGuinty’s winning campaigns.

The already strong partnership between the federal and provincial Liberals took on a more public nature in 2015 when then-premier Kathleen Wynne opted to enthusiastically campaign for Trudeau. It was a risky gambit that stunned many observers, but one that paid rich dividends for Wynne when Trudeau formed a commanding majority government later that year. When putting together his new team, Trudeau relied heavily on many of the Wynne government’s most senior advisers for key roles across his rookie administration.

Given how close the Ontario and federal Liberal parties have become, it’s not unreasonable to conclude that the downfall of one could have adverse effects on the other. While the federal party will confront a variety of challenges in the next election, the collapse of its provincial cousin should rank high on its list of obstacles

As the federal Liberals look ahead to the onerous task of crafting a winning electoral strategy in 2024-25, never has the party faced such a shaky and disparate provincial Liberal organization across the country. Not only are provincial Liberal parties not in government in nine of 10 provinces, they are facing existential threats in Canada’s two largest provinces — among the most critical to the federal party’s electoral prospects.

Any meaningful political strategy for Trudeau’s Liberals must take this daunting and unprecedented reality into consideration. Federal Liberals might be able to eke out one more victory in spite of the extraordinary challenges their provincial counterparts face; but in the longer term, federal Liberals will grapple with substantial organizational and structural challenges if their provincial cousins aren’t able to rebound.

A Pearsonian moment? Not in this budget