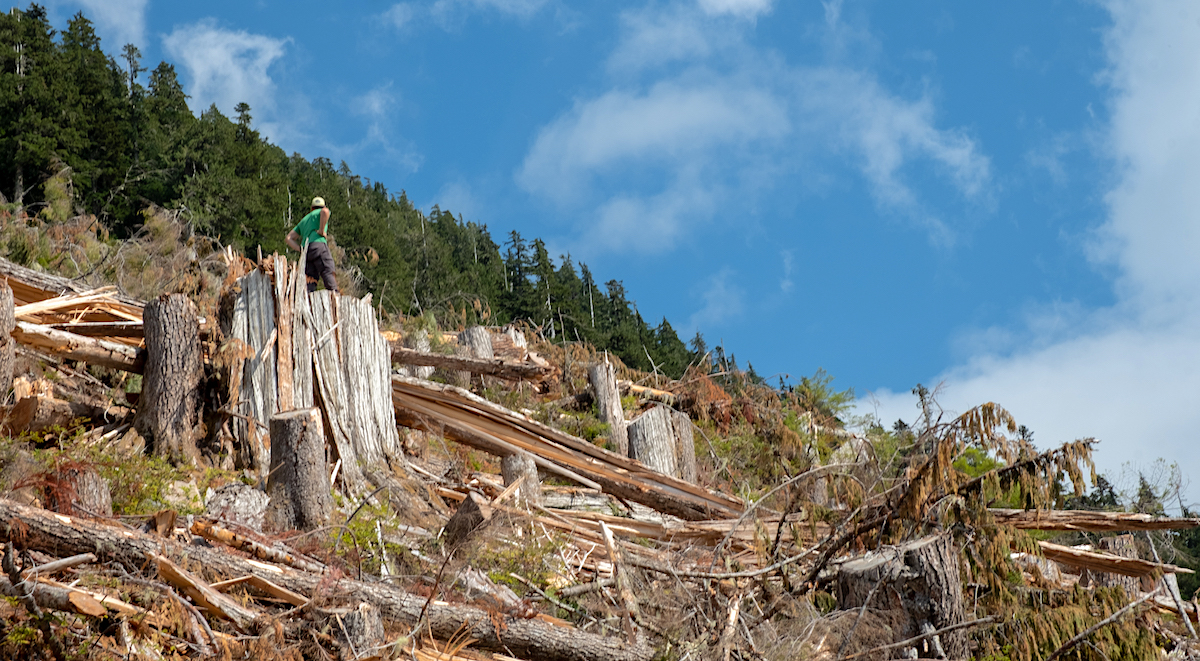 Torrance Coste of the Wilderness Commitee surveys a recent old-growth clear-cut north of Gold River on Vancouver Island that was proposed for a logging deferral by the B.C. government. Photo by Alex Tsui/Wilderness Committee
Previous story
Next story

Two years after pledging to take a new approach to the management of old-growth forests, the B.C. government is failing to make the grade, environmental groups say.

The province promised to act on 14 recommendations in an independent old-growth strategic review to protect the most at-risk big tree ecosystems while transforming forestry over a three-year period.

But the NDP government continues to lag on its most urgent and important commitments, and hasn’t completed any recommendations most of the way through the stated timeline, a report card issued by the Wilderness Committee, Sierra Club BC, Stand.earth and Ancient Forest Alliance suggests.

Although the government has announced a number of old-growth logging deferrals, the clear-cutting of ancient forests is still taking place on the ground, said Torrance Coste, national campaign director for the Wilderness Committee.

But more than 55,000 hectares of the proposed old-growth deferrals are in jeopardy from previously approved forestry plans, with some areas already razed to the ground or at immediate risk of clear-cut, according to satellite imagery in a recent Stand.earth analysis that was verified on the ground, Coste said.

It’s almost impossible to assess whether there will be deferrals in the areas slated for logging because the province isn’t sharing details or maps on what old-growth is protected or threatened, he said.

“Those are huge questions that old-growth nerds like us don’t have the answers to, much less the general public,” Coste said.

The province has also failed to come up with a detailed plan of action — with deadlines — that reflects the progress on the old-growth review’s recommendations, Coste said.

The B.C. NDP government doesn't make the grade on its most urgent and important commitments to protect at-risk ancient forests, a report card issued by environmental groups says.

“In the last six months, the government has virtually been silent,” he said, noting while the NDP released an intentions paper on modernizing forestry last summer, nothing more concrete has emerged since.

The original timeline outlined in the strategic review suggested that 10 of the 14 recommendations would have been completed, with solid progress made on those that remain, the report card states.

The province has also said it won’t halt logging in given areas without agreement from First Nations and communities involved, Coste added.

The B.C. government dedicated $185 million over three years in the 2022 budget to support forestry workers and First Nations impacted by any new restrictions on old-growth logging.

But that amount isn’t sufficient to allow rural communities heavily reliant on forestry revenue a real choice to defer old-growth logging in their territories, the environmental coalition stated.

B.C. should provide $300 million in conservation financing for First Nations to address the impacts of short-term logging deferrals and to pursue long-term protection measures, said TJ Watt of the Ancient Forest Alliance.

“Without that funding, which the province must be fully aware is critical for these efforts to succeed, progress will remain stalled, and irreplaceable ancient forests will continue to fall.”

Think of old-growth as better than air conditioning

Fellow B. C. NDP members who

Fellow B. C. NDP members who are so disappointed with the current government's policies regarding this and many other issues REALLY need to speak up with their votes for the new leader. And I'm NOT referring to David Eby! Anjali Appadurai has dedicated her whole campaign to returning the party to it's grass roots, and reversing such trends to sustainable equitable actions!! David Eby will remain an MLA regardless of the outcome of the election, so he definitely will continue to do what he does best. And that's NOT maintaining the status quo, which is NOT WORKING!!!

I myself have joined the

I myself have joined the provincial party specifically with the intent to vote for her. Although she's not my perfect candidate either . . . I could wish to see a bit more fire and understanding about social justice issues, even as much as a Bernie Sanders would make me happier.