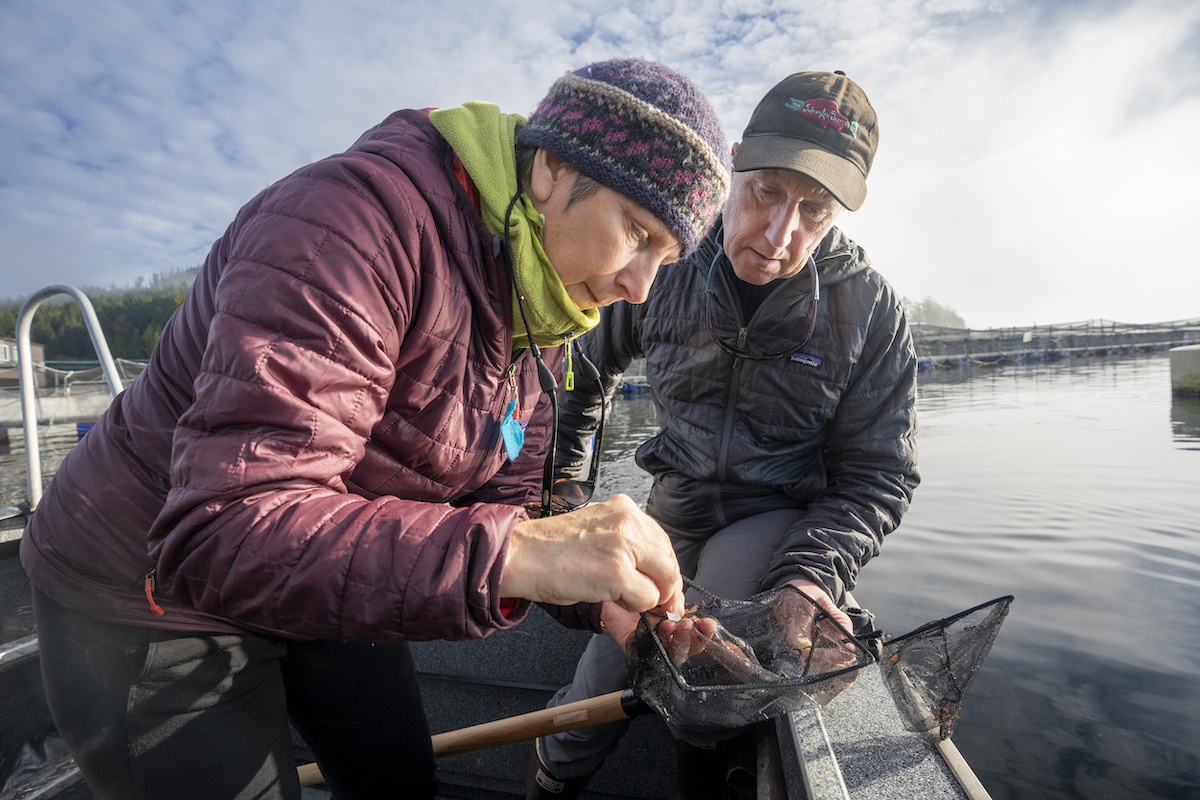 Environmental groups worry Ottawa is backtracking on its commitment to phase out open net-pen salmon farming in B.C. waters after approving expansions to three operations off the west coast of Vancouver Island.

“We’re very concerned (DFO) is going in absolutely the wrong direction,” Glambeck said, adding the increased density of fish at the farms will only amplify existing risks to wild salmon from sea lice and disease.

Fisheries Minister Joyce Murray has a mandate to transition away from open net-pen salmon farms by 2025.

“We’re shocked to see DFO has approved expanding open net-pens, the very technology it is promising to transition away from,” Glambeck said.

“It sends a very bad signal to allow Cermaq to invest millions of dollars into open net-pen technology that we hope will be obsolete within the next two years.”

Production volumes at Cermaq’s Bawden Point and Millar Channel salmon farms will increase by 50 per cent and its Dixon Bay operation will jump by 25 per cent, she said.

The federal government is fully committed to developing a plan to transition away from open net-pen salmon aquaculture in B.C., said DFO in an emailed statement to Canada’s National Observer.

“While Cermaq has requested amendments to three specific sites, the company’s overall production limits in Northern Clayoquot Sound remain unchanged, and only four of the six farms in the area will be allowed to operate at any given time,” the statement said.

Neither DFO nor Murray’s office clarified why the fish farm expansions were approved when the deadline for a transition away from open net-pens is expected within three years.

“We’re shocked to see DFO has approved expanding open net-pens, the very technology it is promising to transition away from,” says Bonny Glambeck @ClayoquotAction about @CermaqCan getting the go-ahead to increase production at three salmon farms.

“Well, if they are growing more fish on any given site, they are going to be shedding more viral particles and more sea lice. It's just that simple,” she said.

“And so the fish from the rivers nearby that migrate past those farms are going to be faced with an increased load of dangerous viruses and pathogens and parasites.”

Stan Proboszcz, senior scientist at Watershed Watch Salmon Society, also expressed concern about the optics of DFO intensifying production at any site given its stated mandate.

It contradicts Murray’s commitment to the phaseout of fish farms in the Discovery Islands region earlier this year despite ongoing court challenges by fish farm companies.

The minister also recently made the decision to renew all the fish farms’ licences for only two years rather than the maximum six years, he noted.

Yet when the framework for the transition plan was released this summer, language in the document “muddies the waters” around Ottawa’s commitment to the 2025 timeline and eliminating net-pens, Proboszcz said.

In particular, the document’s vision statement that suggests the plan will “progressively minimize or eliminate interactions between salmon open net-pens and wild salmon” is particularly alarming, he said.

“The vision statement now talks about only minimizing the interactions with wild salmon,” Proboszcz said.

“If you put that on top of these three fish farm expansions, I’m kind of concerned (the federal government) is changing their trajectory or losing their resolve.”

The new framework also highlights fish farm technology, such as semi-closed containment systems — yet to be proven and in an experimental phase with no feasibility or operational timelines — still involve raising farmed salmon in the ocean, he added.

“And I don’t think we should be waiting an unlimited amount of time until this vague idea of a solution is complete,” he said.

“We actually have more knowledge about completely contained land-based farms in B.C. and operating on the east coast of Florida,” he added, noting the precipitous decline of wild salmon stocks across B.C. is urgent.

Cermaq Canada did not respond to questions or a request for comment before Canada’s National Observer’s publishing deadline.