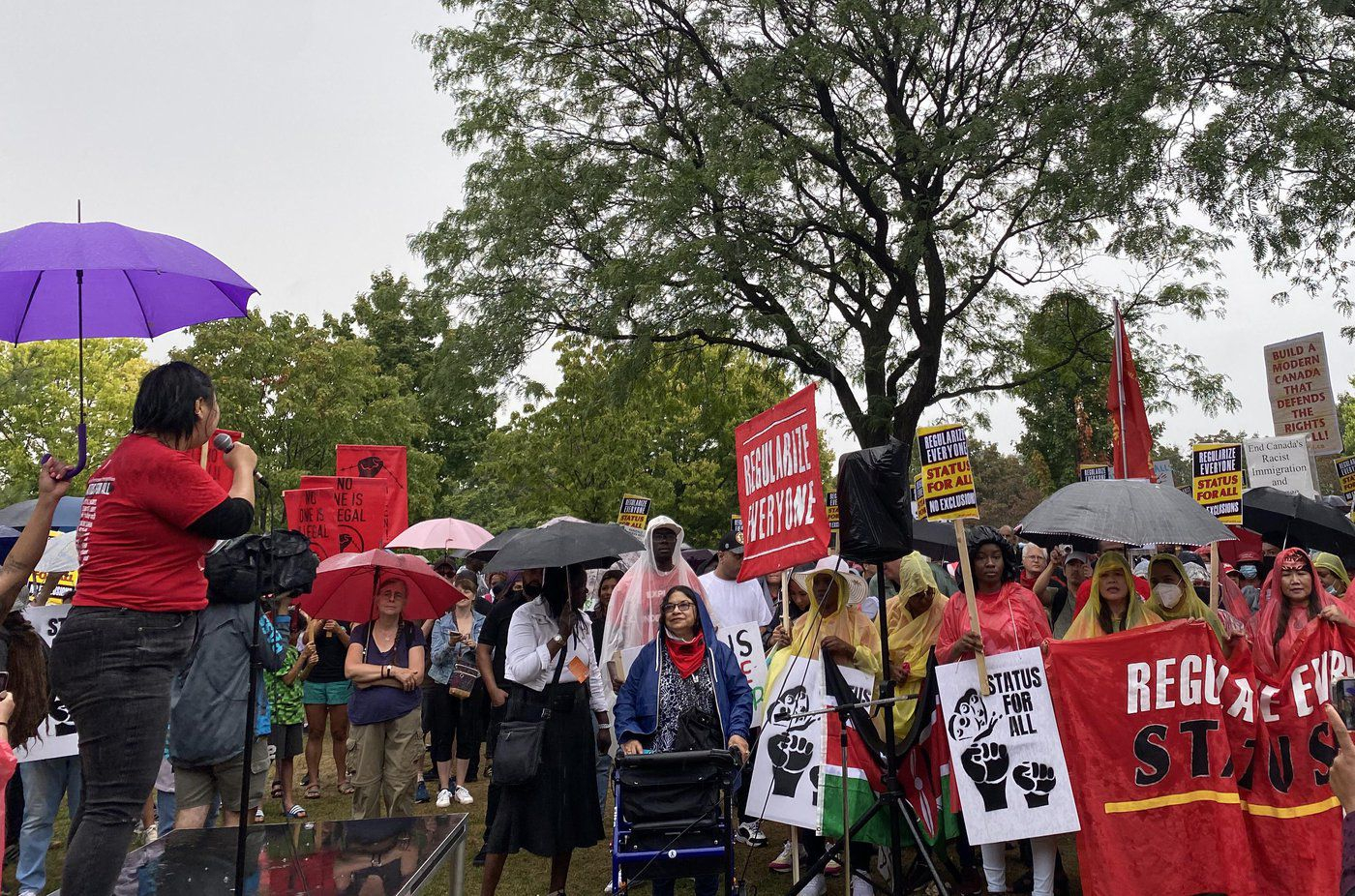 People take part in a rally for migrant rights in Christie Pits park in Toronto on Sunday, Sept. 18, 2022. Photo by The Canadian Press/Holly McKenzie-Sutter
Previous story

Thousands of migrants and their supporters held rallies across Canadian cities on Sunday to call on Ottawa to extend permanent status to undocumented people.

There were also calls to swiftly implement an inclusive regularization program for undocumented migrants — a long-standing demand that advocates say appears closer than ever to becoming a reality based on recent moves by the federal Liberal government.

Syed Hussan, executive director of the Migrant Workers Alliance for Change, said it's an opportune moment for Ottawa to listen to calls from his group and others for more access to basic rights for undocumented people in Canada.

"We have a historic opportunity right now to fix a wrong that has been going on for many, many years," he said by phone before heading to a planned afternoon rally in Toronto.

"We want to make sure that parliament does not in any way delay."

Ottawa launched a regularization program during the COVID-19 pandemic for asylum seekers who worked in the health sector. Since then, Prime Minister Justin Trudeau has indicated interest in expanding the initiative.

A mandate letter from December 2021 asked Trudeau's immigration and citizenship minister to "build on existing pilot programs to further explore ways of regularizing status for undocumented workers who are contributing to Canadian communities."

Hussan said the program should include all undocumented people and argued it should be a focus for the government as parliament prepares to return next week.

"Prime Minister Trudeau has already indicated that he wants to do the right thing. The question now is, only, will everyone be included," Hussan said.

"We believe that equality is equality, any exclusion is discrimination, so each and every migrant worker or refugee, student and undocumented person should be included."

#Migrants across #Canada call on Ottawa for action on #regularization, #PermanentStatus. #CDNPoli

A spokeswoman for Immigration, Refugees and Citizenship Minister Sean Fraser said work to deliver on the mandate commitment on regularizing status for undocumented workers is ongoing as the ministry engages with experts and stakeholders.

Aidan Strickland said future policy decisions will be based on lessons learned from recent programs like the one for asylum seekers working in health care during the pandemic.
“As we emerge from the pandemic, IRCC will continue to explore new avenues to help more foreign nationals already living in Canada to make this their permanent home,” Strickland said in an email.

“While we cannot speculate on future policy decisions, this is an opportunity for us to look at best practices and lessons learned from our previous experiences to ensure the most inclusive and effective public policy.”

Hussan said he expected thousands of people in total to attend the rallies and marches planned in 13 cities including Toronto, Montreal, Edmonton, Vancouver, Fredericton and St. John's, N.L., led by the Migrant Rights Network.

Heavy rain did not deter hundreds of people from gathering in a Toronto park with umbrellas and signs calling on the government to extend "status for all" — a mantra repeated in chants and speeches throughout the afternoon event.

Labour groups and unions were also in attendance waving signs.

Nineteen-year-old Merari Borgez, who moved to Toronto from Mexico City as a child, told the crowd about how her family struggled to access health care and education and were unable to travel and say goodbye to relatives due to their lack of status in Canada.

"Living without status is dehumanizing," she said, calling on politicians to work quickly on extending status to families like hers. "We don't want pity. We want action."

Similar days of national protest have been held on the issue of migrant status, but Hussan said Sunday's events were expected to be larger as momentum for the cause has grown in recent years.

That's partly due to a growing number of undocumented people who are organizing for more rights, he said, as well as a renewed spotlight placed on inequalities they faced in essential jobs during the pandemic.

He said calls for status and regularization would give undocumented working people in Canada rights to advocate for better work, study and living conditions, as well as to access universal health-care.

The measures would also give people more labour mobility and improve work conditions, he said.

At Sunday's event, she shared challenges she's faced as a refugee looking to remain in Canada. After being denied various applications for status, Michael said regularization is her last option.

She said she has been asked to pay for health-care services and her situation has deeply affected her mental health, but she is not able to take time off from the hospital where she works due to her status.

"This is like (you are) in prison. You're being held captive," she said. She called on parliament to extend permanent status to all migrants, including herself and others who have been working on the front line during COVID-19.

"Why should we be treated this way," she told the crowd. "All human beings deserve to be treated rightly. We have the right to live happily in Canada."

This report by The Canadian Press was first published Sept. 18, 2022.