Nova Scotians stock up on food, propane and ‘storm chips’ as hurricane Fiona draws near 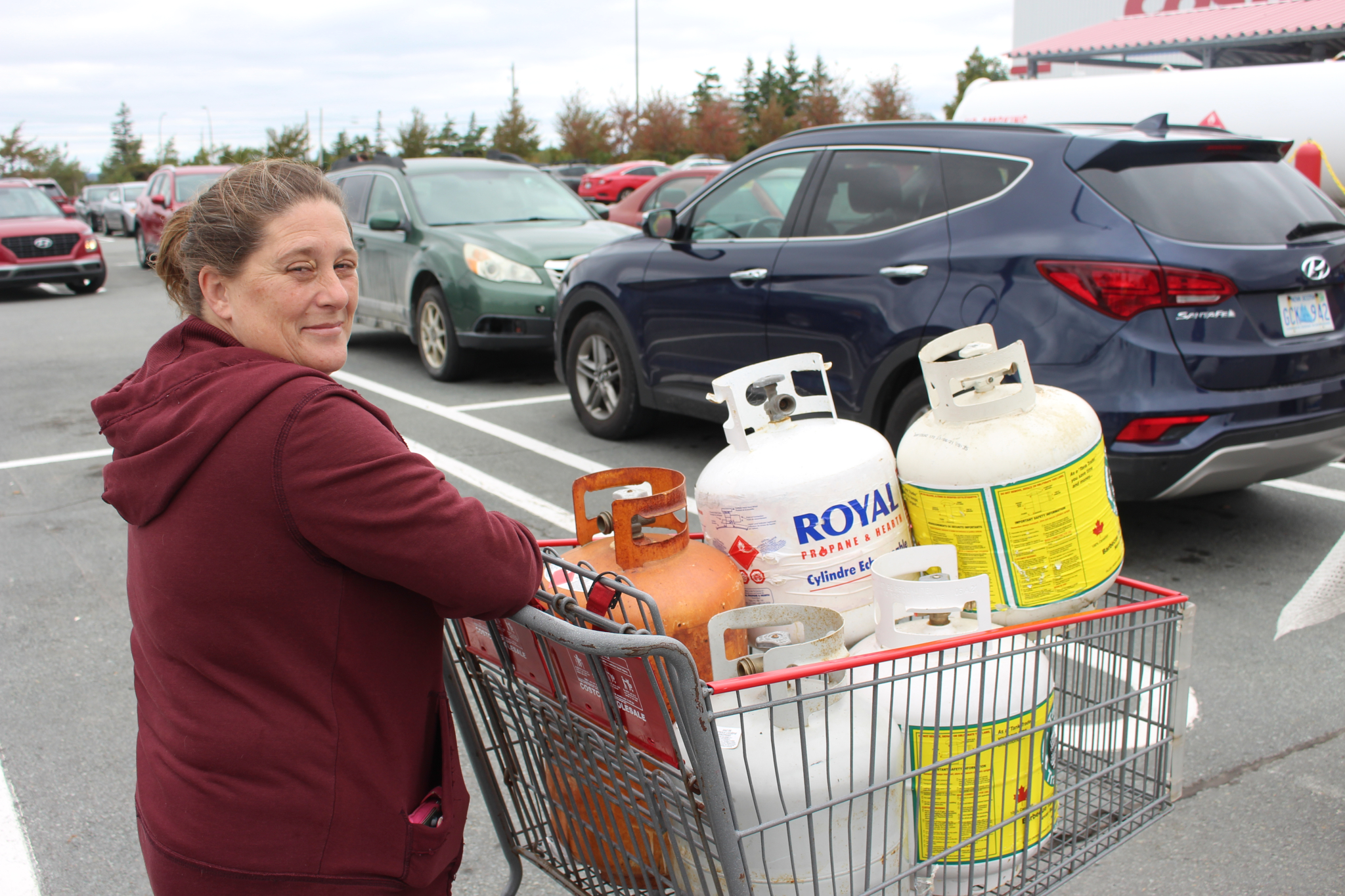 Jennifer Belliveau waits in line to fill up her propane tanks at Costco. Photo by Moira Donovan
Previous story
Next story

Nova Scotians are hitting the grocery stores in droves, stocking up on food, propane, batteries and water as hurricane Fiona’s arrival draws near.

Hurricane Fiona will land in Atlantic Canada late Friday and early Saturday and is expected to bring “strong winds, heavy rain and storm surges [that] can cause power outages, flooding and significant damage,” according to the province of Nova Scotia.

Along with the necessities, many people grabbed a bag or more of what have quirkily become known as “storm chips.” In 2015, a local CBC host joked she was preparing for an incoming storm by buying chips. Now, storm chip purchases have become a reliable barometer of bad weather in Nova Scotia. By Thursday afternoon, snack aisles were already depleted.

As they loaded groceries into the back of their car, Halifax roommates Yassine Yassine, Oky Kepeneck and Samuel Izedonmven explained they were living in university residence during hurricane Dorian. This was their first time weathering a hurricane on their own. Along with more nutritious fare were the requisite chips.

“We’re getting chips because you don’t put them in the fridge. So if electricity gets cut off, we have food.”

Meteorologists from Canada and the United States are weighing in on the trajectory of Fiona, a Category 4 hurricane as of Wednesday morning, according to AccuWeather. The storm, which caused historic flooding in Puerto Rico earlier this week before striking the Dominican Republic and the Turks and Caicos Islands, is currently moving northward through the Atlantic Ocean. It’s set to hit Atlantic Canada as it shifts into a post-tropical storm. Quebec's Lower North Shore and southeastern Labrador are set to experience the storm early Sunday.

It’s expected to grow as it moves towards Atlantic Canada, and will cover a large area: hurricane watches have been put in place for P.E.I., eastern Nova Scotia, western Newfoundland and Îles-de-la-Madeleine.

“Even though the storm won’t be a major hurricane by the time it reaches the Gulf of St. Lawrence region, some areas could be at risk for extreme damage.”

Nova Scotians are hitting the grocery stores in droves, stocking up on food, propane, batteries and water as hurricane Fiona’s arrival draws near.

Ian Hubbard, a meteorologist at the Canadian Hurricane Centre in Dartmouth, N.S., said there is potential for winds to reach as high as 140 kilometres per hour in eastern Nova Scotia, Cape Breton and parts of Prince Edward Island. Waves off Nova Scotia could reach higher than 10 metres, he said.

Brian Tang, professor of atmospheric sciences at the University of Albany, tweeted that Fiona “will likely be a generational storm for Nova Scotia.”

Even for a region used to bad weather, this forecast is off the charts bad. Fiona will likely be a generational storm for Nova Scotia. pic.twitter.com/ajqAwPwOiW

However, extreme weather is set to become more common worldwide due to climate change. The government of Nova Scotia notes: “Climate change is expected to bring warmer average temperatures, higher sea levels, more extreme rainfalls and storm flooding, and more frequent and extreme storms. These changes will have many impacts.” An Intergovernmental Panel on Climate Change report from earlier this year found Atlantic Canada is set to be hit hard by the impacts of a hotter planet.

On Wednesday, ECCC Weather Newfoundland and Labrador said Fiona will hit the west and southwest areas of the province most severely, with significant winds, intense rainfall and “very large waves and coastal storm surge” expected between Friday night and Sunday morning.

Unhoused people will be hit especially hard by the storm. Some emergency shelters are popping up in Nova Scotia. The province announced that an emergency shelter will open in Dartmouth on Friday and Saturday night, with a city bus stopping by encampments if people want rides to the shelter. The Church of St. Elizabeth Seton in Lower Sackville will also act as an emergency shelter.

P.E.I. has announced similar plans, with some residents of encampments highlighting poor communication and access to support thus far.

Cape Breton is expected to be hit especially hard, said Regional Municipality Mayor Amanda McDougall at a press briefing on Wednesday afternoon. Plans are in the works for an emergency shelter, she said.

“Cape Breton as an island is in the direct impact zone. We have been through these types of events before, but my fear is not to this extent. The impacts are going to be large, and they're going to be real and immediate,” she said.

At the briefing, Halifax Mayor Mike Savage said the storm is “going to hit us in the face.”

Around the same time, outside a Costco in a Halifax business park, the line for propane snaked down the parking lot. While in line, Dawn Colbon pointed to hurricane Juan as her reference for storm preparedness, but she’d also been watching what Fiona had done to Puerto Rico, where the storm caused severe damage and left roughly a million people without power.

She didn’t think Nova Scotia would be hit as hard; still, she’d spent the day putting away her patio furniture, taking whatever plants she could inside and helping her mother secure things on her property.

Taking in the low ceiling of cloud overhead and the warm wind that whipped across the parking lot, Colbon noted Fiona already seemed close. “You can feel it.”