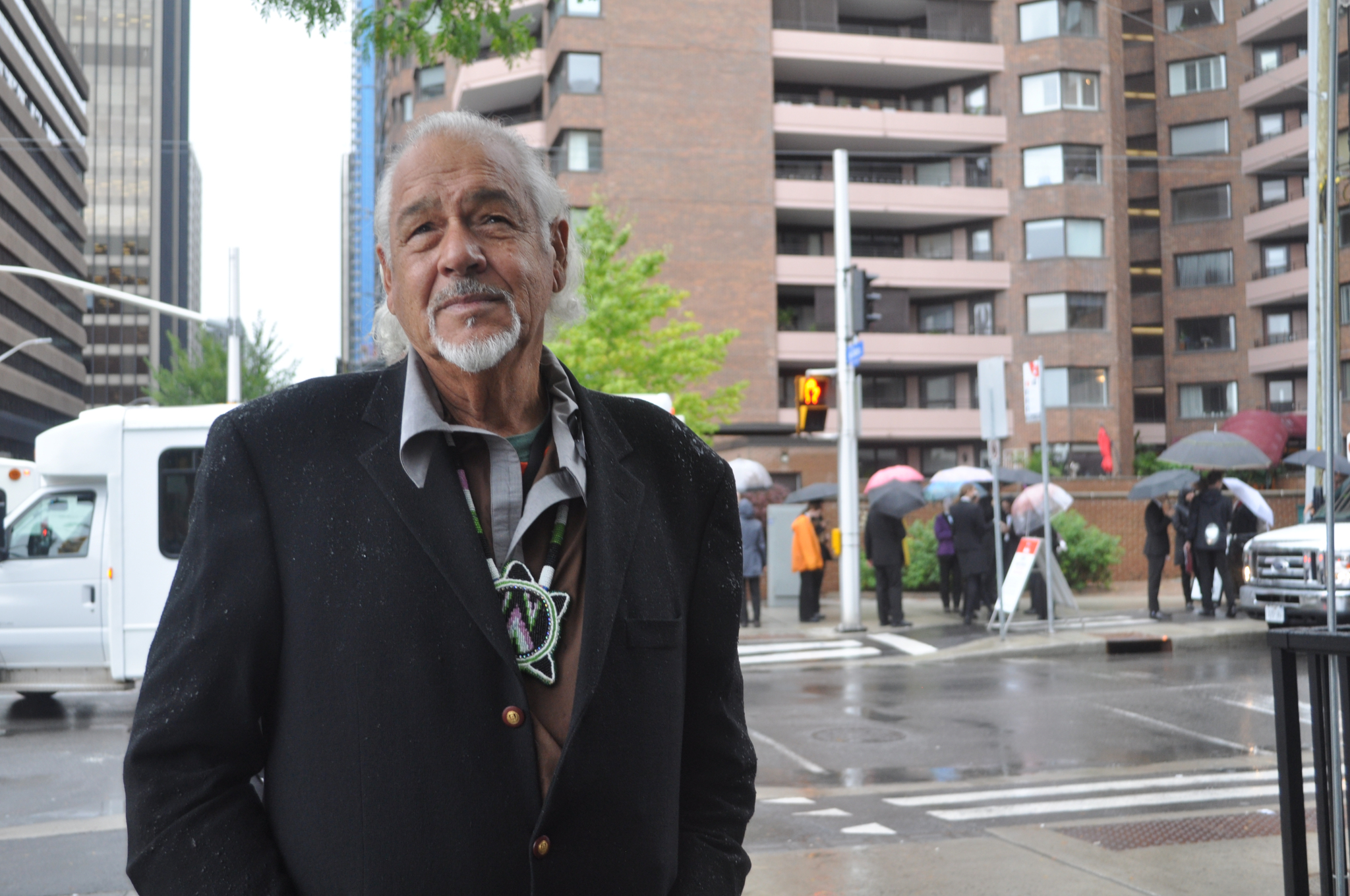 Albert Dumont, an Algonquin leader, speaks of a complicated legacy of the Crown, but highly of the late Queen Elizabeth II. Photo by Matteo Cimellaro/Canada's National Observer
Previous story

“The horrors committed against Indigenous Peoples … by past monarchs will be spoken about around council fires of the spirit land,” he says at the service held at Christ Church Cathedral in Ottawa, where former prime minister Brian Mulroney, NDP Leader Jagmeet Singh and Green Party MP Elizabeth May were in the audience. “The Queen, at that time, will renounce the brutality of the past.”

Dumont doesn’t doubt the character of Queen Elizabeth II, describing her as a “fire” and “role model” for her future ancestors in the conclusion of his eulogy. After the service, he tells Canada’s National Observer she was a sweet old woman who was cute “like grandma,” and even recounts a story of his granddaughter playing dress-up as the Queen one day, with the brim hat and small purse in tow.

But despite Dumont’s positive words about the Queen, there’s a greater shadow cast on the Royal Family for many Indigenous Peoples.

It’s all part of the Crown’s complicated legacy of colonialism and the ongoing nation-to-nation relationship between the Commonwealth and Indigenous Peoples.

For example, Dumont points to the Queen’s estate, which is worth US$21 billion or more, as a dark reminder of a colonial past.

“I ask myself: where did the monarchy get that kind of wealth? I think lots of it probably came from colonization and the resources that were stolen from the Indigenous Peoples of those countries,” Dumont told Canada’s National Observer.

Dumont sees this legacy as an opportunity for the Royal Family to reconcile with Indigenous Peoples.

When Dumont thinks about the wealth grown from the dispossessed land of Indigenous Peoples across the once vast empire, he wonders if a day will come when the Royal Family will acknowledge its role in the colonial past of the British Empire and work towards reconciliation.

He hopes the royals will apologize for the colonial injustices with both words and action — for example, by funding the development of buildings that will facilitate healing between Indigenous Peoples and the Crown.

“For one reason: for reconciliation’s sake,” Dumont says. “Whatever would occur in those buildings would create harmony and respect for one another, the way it should’ve been from the beginning of the relationship.”

"I think lots of it probably came from colonization and the resources that were stolen from the Indigenous Peoples of those countries," Algonquin Elder Albert Dumont told Canada's National Observer of the Royal Family's wealth.

For the Algonquin Anishinabeg in particular, Dumont speaks about a brutal legacy between the British and his nation. In pre-Confederation times, he says the British supplied weapons to people “who were hellbent on massacring Algonquins.”

Then, following Confederation, the Algonquins, like other Indigenous Peoples affected by the Indian Act, suffered greatly under the pass system. It’s what Dumont calls the “cruelest parts” of the Indian Act.

During that time, Indigenous Peoples needed permission from an Indian agent to leave their reserve. Dumont was four years old when the policy was repealed.

Only six years later, in 1960, Indigenous Peoples were given the right to vote.

Now, Dumont hopes King Charles III will make an effort to reach out and sit with Grand Chiefs across Turtle Island to walk that path towards reconciliation between the Crown and Indigenous Peoples.

“The healing needs to be taken seriously.”

i have no doubt that all

i have no doubt that all indigenous peoples on turtle island have a most complicated relationship with the monarchy... after all the lands of turtle island are your lands . i use to wonder which century should queen elizabeth apologize for... rather daunting when one considers that history can not be changed but it can be a much needed teacher for all . i truly believe that elizabeth understood change was needed it was just not her time is that harsh you bet but more importantly i truly believe the royal family led by charles the 111 understands the need to change & with mary simon at the helm here helps immensely . yesterday a new era began that will different charles 111 has already begun to bridge the gaps based on today . is an apology needed most definitely & the sooner the better after all their are a lot of people waiting in line not only in canada but around the commonwealth... colonialism has wrongfully affected many people .
as for wealth priceless paintings gathered over centuries... jewels... the koh-i-noor diamond taken from india during the reign of victoria... lands that are now priceless... lands that have been rented out to crofters for centuries . not all were taken much was purchased over the centuries as for colonialism...

The current King of Canada is

The current King of Canada is 'an embodiment of the State' and has no power to do anything much except, through the Governor General as proxy, convene and porogue Parliament. The power to effect reconciliation and to render any meaningful apology, or restitution resides with the Canadian Parliament. The British Crown signed treaties with indigenous people; the Canadian government inherited the legal obligations for those. If the Canadian government has been remise (of which I have no doubt) then the best one can expect from Charles III is that he would apologise "on behalf of His government in Canada". Good luck with persuading a Canadian prime minister to ask him to do that!

I confess I'm a bit confused

I confess I'm a bit confused as to what powers to change anything here are currently held by the British monarchy. Other than starting to pay their own way when they visit us.