Tonga’s undersea eruption shook the world. But what did it do to our climate? 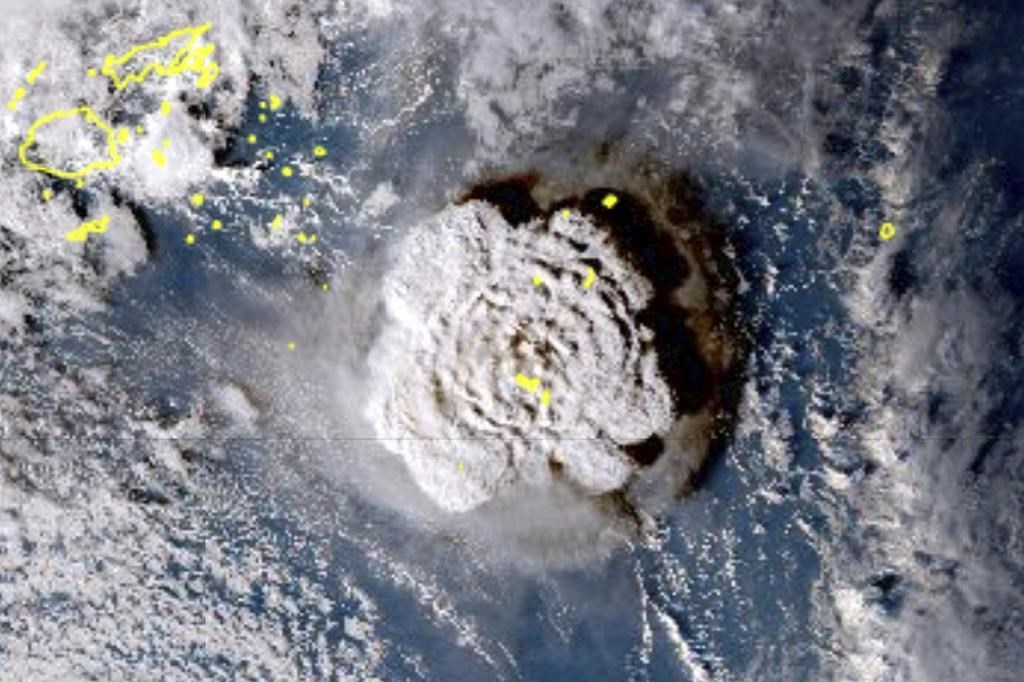 This image from the Japanese weather satellite Himawari-8 shows the eruption of the Hunga Tonga-Hunga Ha’apai undersea volcano at the Pacific nation of Tonga on Jan. 15, 2022. Photo via AP/Japan Meteorology Agency
Previous story

NEW YORK (AP) — When an undersea volcano erupted in Tonga in January, its watery blast was huge and unusual — and scientists are still trying to understand its impacts.

The volcano, known as Hunga Tonga-Hunga Ha’apai, shot millions of tons of water vapour high up into the atmosphere, according to a study published Thursday in the journal Science.

The researchers estimate the eruption raised the amount of water in the stratosphere — the second layer of the atmosphere, above the range where humans live and breathe — by around five per cent.

Now, scientists are trying to figure out how all that water could affect the atmosphere, and whether it might warm Earth’s surface over the next few years.

“This was a once-in-a-lifetime event,” said lead author Holger Voemel, a scientist at the National Center for Atmospheric Research in Colorado.

Big eruptions usually cool the planet. Most volcanoes send up large amounts of sulfur, which blocks the sun’s rays, explained Matthew Toohey, a climate researcher at the University of Saskatchewan who was not involved in the study.

The Tongan blast was much soggier: The eruption started under the ocean, so it shot up a plume with much more water than usual. And since water vapour acts as a heat-trapping greenhouse gas, the eruption will probably raise temperatures instead of lowering them, Toohey said.

It’s unclear just how much warming could be in store.

Karen Rosenlof, a climate scientist at the National Oceanic and Atmospheric Administration who was not involved with the study, said she expects the effects to be minimal and temporary.

“This amount of increase might warm the surface a small amount for a short amount of time,” Rosenlof said in an email.

When an undersea volcano erupted in Tonga in January, its watery blast was huge and unusual — and scientists are still trying to understand its impacts. #GlobalHeating #WaterVapour

The water vapour will stick around the upper atmosphere for a few years before making its way into the lower atmosphere, Toohey said. In the meantime, the extra water might also speed up ozone loss in the atmosphere, Rosenlof added.

But it’s hard for scientists to say for sure because they’ve never seen an eruption like this one.

The stratosphere stretches from around 12 kilometres to 50 kilometres above Earth and is usually very dry, Voemel explained.

Voemel's team estimated the volcano’s plume using a network of instruments suspended from weather balloons. Usually, these tools can’t even measure water levels in the stratosphere because the amounts are so low, Voemel said.

Another research group monitored the blast using an instrument on a NASA satellite. In their study, published earlier this summer, they estimated the eruption to be even bigger, adding around 150 million metric tons of water vapour to the stratosphere — three times as much as Voemel's study found.

Voemel acknowledged that the satellite imaging might have observed parts of the plume that the balloon instruments couldn’t catch, making its estimate higher.

Either way, he said, the Tongan blast was unlike anything seen in recent history, and studying its aftermath may hold new insights into our atmosphere.